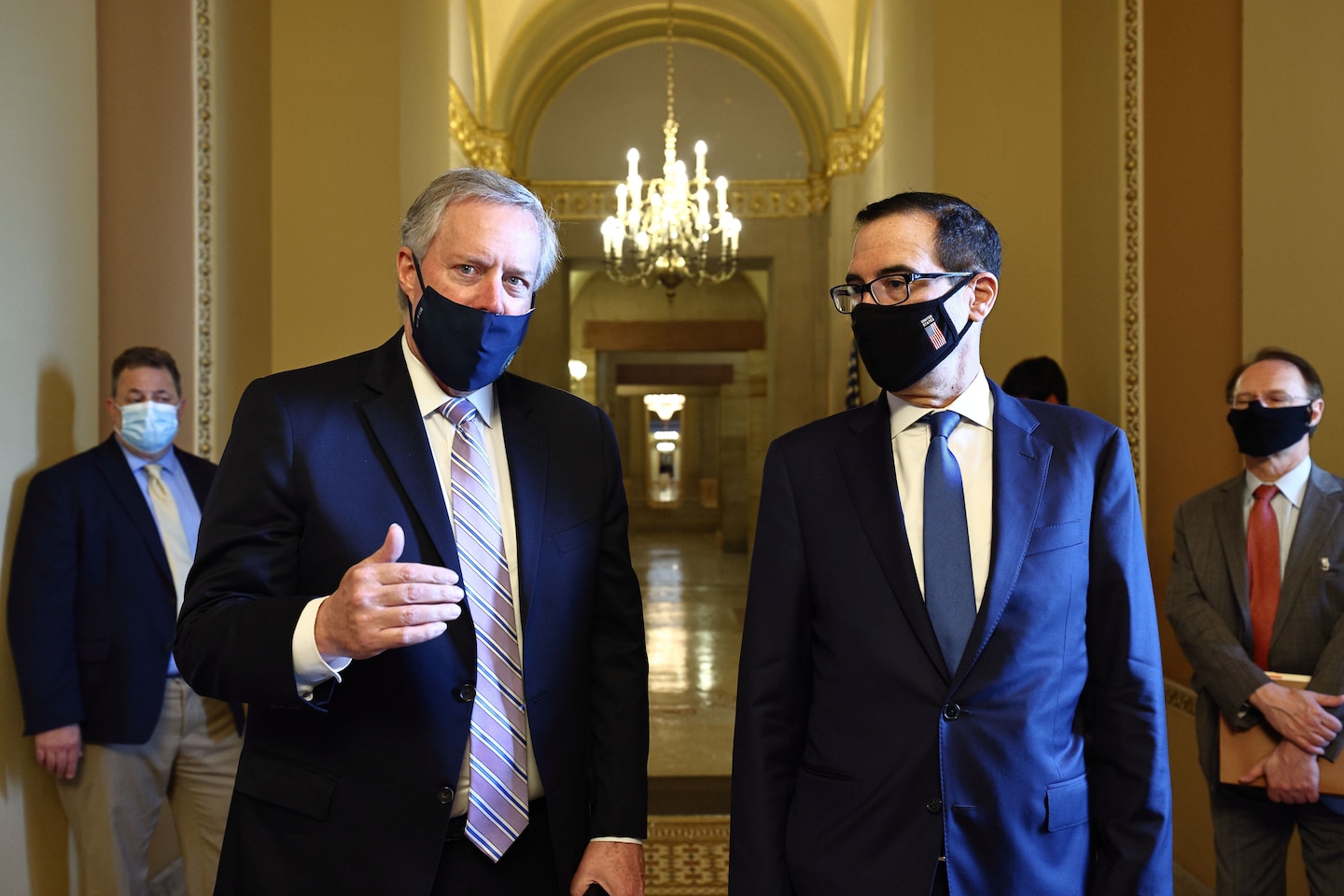 Already cutoff dates are coming and going. The federal ban on rental evictions expired Friday (though White House economic adviser Larry Kudlow promised it would be extended). The extra $600 a week in unemployment benefits under the Cares Act expire this coming Friday; the last checks have already gone out. And most small businesses that received loans under the Paycheck Protection Program have exhausted that money.

Back in May, and well ahead of these deadlines, Democrats passed the Heroes Act, which among other measures would extend the $600-a-week bonus and issue a second round of $1,200 stimulus checks. Republicans were supposed to have their version ready by the middle of last week. Wednesday came and went. So did Thursday. On Friday, Senate Majority Leader Mitch McConnell (R-Ky.) said, “Hopefully we can come together behind some package we can agree on in the next few weeks.”

Don’t worry, Treasury Secretary Steven Mnuchin assured viewers of “Fox News Sunday”: Republicans were “just working on technical issues in the drafts” even though “we had previously agreed on all these issues earlier in the week.”

The centerpiece of the GOP plan — reducing the unemployment benefits — is, if nothing else, well-suited to conservative doctrine. That was the clear theme on Sunday morning: “We want to make sure … people don’t get paid more to stay home than they do to work,” Mnuchin said. On ABC’s “This Week,” White House chief of staff Mark Meadows criticized the expiring benefits as counterproductive: “Actually a lot of people got more money staying at home than they would going back to work.” Over on CBS’s “Face the Nation,” Sen. Ted Cruz (R-Tex.) claimed that “small business owners all over the state of Texas” can’t reopen because their workers prefer to stay home and draw unemployment benefits.

This may sound like common sense, especially to Republicans, but it’s not true. If unemployment benefits were depressing job numbers, we’d see wages going up, but that’s not what’s happening. In fact, those on unemployment benefits are more likely to look for work than those whose benefits have expired. And, as economist Ernie Tedeschi pointed out, “Of the workers who got rehired out of [unemployment] in June, 70% were likely getting … benefits greater than their prior wage.” No wonder when a University of Chicago survey of top economists asked whether “employment growth is currently constrained more by firms’ lack of interest in hiring than people’s willingness to work at prevailing wages,” not a single economist chose the latter.

The Democratic plan isn’t perfect. A better package would have included a paycheck guarantee bill by Rep. Pramila Jayapal (D-Wash.) while banning lobbyists and other trade groups from receiving pandemic bailout funds. That provision likely guts what little public relations benefit Democrats might have hoped to gain by naming the bill after “heroes.” But at least it’s a plan; at least Democrats took a vote, while Republicans are stumbling around looking for their pants; and at least Democrats have accounted for economic reality, rather than parrot ideological “common sense” with all the accuracy of an anti-vaccination poster on Facebook.

So let’s recap the past several weeks: Against the warnings of experts, states mostly led by Republicans begin to reopen. As covid-19 cases start to surge, Republicans resisted reversing course, likely prompting another round of closings and possibly prolonging the associated depression. Now Americans who will face more time out of work thanks to those mistakes are also facing more time without government relief because that same party can’t get its act together. It would be almost funny, if it weren’t so sad.