Focus on details amid a pandemic? The Nationals show some days it’s easier than others. 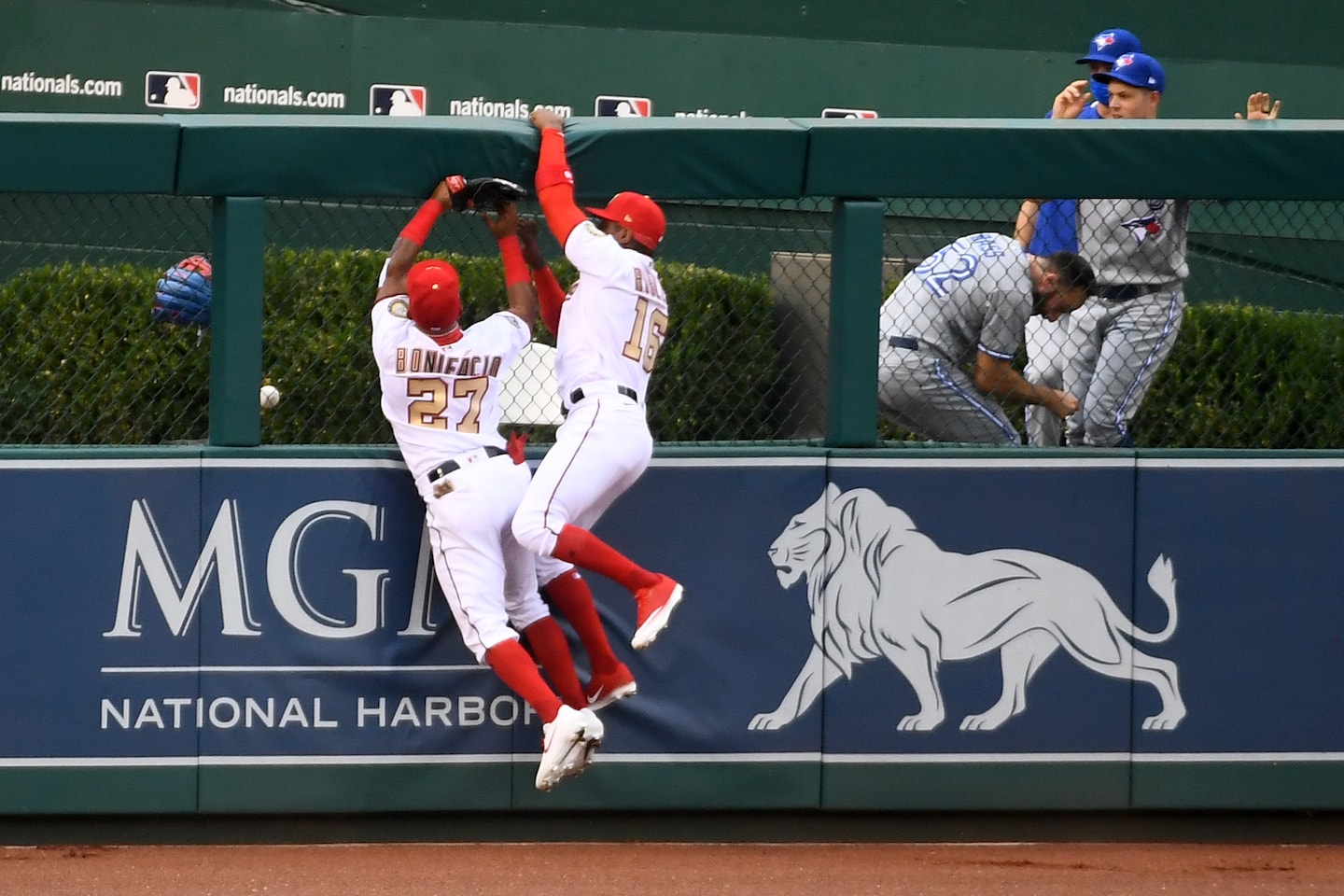 Besides, if major league baseball rides out this pandemic storm, as we all hope, maybe the Nats will play a whole mini-season.

Every major league player — and fan for that matter — is torn by two states of minds right now: Play the season or cancel it. No one knows which it will be. Yet they are incompatible attitudes. The “cancel” mind-set is useless and needs to go.

Right now, the Nats face a classic, focus-eroding problem. They have four days off after Thursday’s 6-4 win over the Toronto Blue Jays at Nationals Park got their record up to 3-4. Washington’s three-game series in Miami this weekend was canceled for two stunning reasons, both unique in major league history.

In the season’s early days, the Nationals have shown signs of the same pandemic distraction that nags many teams. Sometimes they keep their minds on their business. Shortstop Trea Turner’s dive to start a game-saving double play Wednesday was worthy of any red-circle play last season. Max Scherzer (21 strikeouts in two starts) and Patrick Corbin (six dominant innings against the New York Yankees) have been stellar.

The bullpen, so historically awful last season that it could improve enough to compensate for the loss of Anthony Rendon, has a 1.56 ERA in 25 appearances. Daniel Hudson, who got the save Thursday, and Tanner Rainey look like the present and, perhaps, future closer. If Sean Doolittle regains his late 2019 velocity, he and Will Harris finish a fine back end.

Yet the Nats, who have been without stars Juan Soto (positive coronavirus test) and Stephen Strasburg (nerve irritation in his thumb), also have looked distracted and rattled at times. They made five errors in one game, got the tying run thrown out at third base with no outs in the ninth inning and knocked a teammate’s glove — with the ball in it — over the fence for a home run.

Starlin Castro, 30, a four-time all-star, was presumed to be an upgrade at second base, where he has played 570 games. He is coming off a season in which he hit .280, belted 22 home runs and had 86 RBI. So far, he has had some jitters (three errors) in the field. But his four hits Thursday hint at why General Manager Mike Rizzo thought Castro was his offseason steal, an overlooked quiet star with an ideal team-first attitude. When Soto returns to the middle of the lineup, that should take pressure off Castro, Eric Thames and Howie Kendrick.

Usually, after so few games, you tell yourself: “The kinks will work out. Soto and Strasburg probably will be back next week. So just chill.” This year, you hear pundits saying, “A slow start is a disaster.” Yes, Saturday is Aug. 1.

Two weeks ago, to hype October interest and make extra TV bucks, MLB introduced a one-year, 16-team postseason format that is a disgrace to the sport. And a calming consolation to any team that starts poorly.

The first round this year will be a three-game series with the higher seed playing all three at home. It’s fluke-ball, not baseball. But it also means that the team with the best three-man top of the rotation — if it protects those stars and keeps them healthy — may have the best chance of anybody to survive the first round.

Who has the game’s best top three? Houston lost Gerrit Cole to free agency and now sees Justin Verlander’s season threatened by an elbow strain. The Los Angeles Dodgers lost Hyun-Jin Ryu to free agency, saw lefty David Price opt out of the season and now has watched Clayton Kershaw, who gets hurt more often and earlier every year, and Alex Wood miss starts. Other elite arms, such as Texas’s Corey Kluber, may be out for the season.

Scherzer, Corbin and Strasburg, if he is brought back with patience, are the Big Three you want. That’s not assurance you will advance, but it does resemble insurance.

The Nats’ main job in August, aside from keeping as many arms healthy as possible, is to find their best post-Rendon lineup once Soto returns. Entering Thursday, just three teams had scored fewer runs per game than the Nats. With runners on base, are they thinking, “Where’s Juan?”

If Castro can find his pull-and-lift stroke from the second half of last year, he’s the answer. But he hasn’t yet. Hitting third is probably asking too much of vet Asdrúbal Cabrera despite his 91 RBI last year, and top rookie Carter Kieboom’s probable ascension to the middle of the order is at least a couple of seasons away. Kendrick and Thames work best when they hit in the Nos. 4 and 5 spots.

Someday, Victor Robles will hit high in the order. But now he is tinkering, perhaps trying to change his history of being a human fastball target. He has moved off the plate, opened his stance and, with the outside corner vulnerable, fanned in 10 of his first 19 at-bats. He will figure it out.

Perhaps none of this will matter. Three more Philadelphia Phillies games were canceled this weekend because two members of the team’s staff tested positive for the virus. All over baseball, in the wake of the Marlins’ outbreak, there’s talk about how 2020 may be a giant and foolish waste of time. Players wonder whether they should opt out now, play it safe and go home.

But, day-to-day, there has never been a greater need to focus on “Go 1-0 today.” The Nationals’ win Thursday may have been their most crisp game of the season; their bizarre virus reward is four days off.

If a playoffs and World Series actually happen, some teams, with hindsight, will admit they just couldn’t stay focused through so much hardship, capricious weirdness and raw worry.

The Nats surely have the Big Three, probably have the improved bullpen and, with enough lineup mixing and matching, may have enough offense to make another run if there is an October.

As long as this season lasts, can they keep their mind off the world’s huge problems and focus instead on all the game’s details and subtleties that were their passion a year ago — and a core reason they now wear rings.