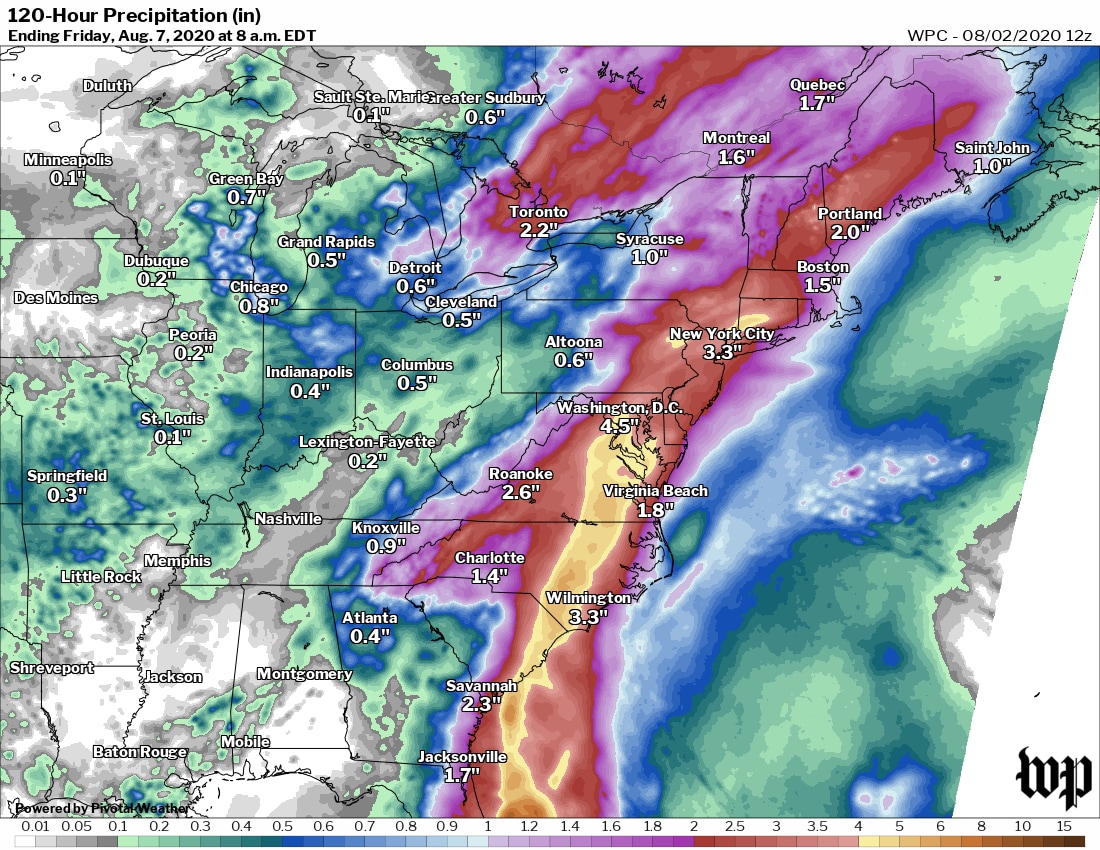 Flooding from rising ocean water at the coast and heavy rains into the interior could affect every state from Florida to Maine.

“Flash and urban flooding, some of which may be significant in the coastal Carolinas and Virginia, is expected through midweek along and near the path of Isaias along the U.S. East Coast,” the National Hurricane Center wrote.

Isaias now and its track and intensity forecast

As of 11 a.m., Isaias was located 55 miles southeast of Fort Pierce, Fla. moving northwest at 8 mph. The storm’s maximum sustained winds are 65 mph, making it a strong tropical storm.

Although it is passing over warm water, which would ordinarily support intensification, Isaias has battled dry air and wind shear since Friday, which has not allowed it to become well-organized. On Sunday morning, the National Hurricane Center indicated forecast models “do not show the shear abating” and “the window of opportunity for it to re-strengthen is closing.”

Along Florida’s east coast, the storm’s outer rain bands have produced periodic heavy showers. From Juno Beach to Port St. Lucie, occasional wind gusts have reached 40 to 60 mph. However, dry air west of the storm center has cut back on the rainfall, and on Sunday morning, shower coverage was rather spotty. Rain could increase later in the day into Sunday night as the storm center draws closer, especially along the Treasure and Space coasts.

The Hurricane Center forecasts Isaias to remain a tropical storm as it surges up the East Coast through Wednesday, with the greatest threat coming from the storm’s heavy rains, with damaging winds confined to coastal areas closest to the storm center.

From the eastern Carolinas into the Northeast, the storm may interact with other weather systems to create periods of heavy rain on Monday into Tuesday. As much as a half-foot of rain or more could fall in the corridor from Raleigh, N.C., to Washington to New York, some of which could fall well ahead of the tropical storm itself.

A tropical storm warning extends from Jupiter Inlet, Fla., to Surf City, N.C and is likely to be extended north with time. This warning zone includes Melbourne, Daytona Beach and Jacksonville in Florida; Savannah, Ga., and Charleston, S.C. It does not include West Palm Beach and points south. A tropical storm watch covers the North Carolina Outer Banks.

Since the storm is unlikely to move inland over Florida and push large amounts of ocean water into the coastline, the Hurricane Center discontinued the storm surge watch along Florida’s east coast. Even so, minor storm surge inundation is still possible from Jupiter Inlet north, especially around high tide.

The Hurricane Center issued a new surge watch from South Santee River, S.C. to Surf City, N.C. This includes Charleston and Myrtle Beach, S.C., near where the storm is more likely to come ashore.

Coastal flooding from high water may also become a concern along the shore farther north.

Since Friday, the storm has drenched the southeastern and central Bahamas, buffeting the islands with hurricane-force winds. It was also expected to produce several feet of storm surge inundation. The northwestern Bahamas caught the brunt of Isaias on Saturday as it closed in on Florida, making landfall on northern Andros Island midday Saturday.

The weather is behind NASA and SpaceX’s decision to bring the crew of SpaceX’s “Endeavor” capsule, which is slated to undock from the International Space Station on Saturday evening and splash down Sunday at 2:41 p.m., the first-ever astronaut splashdown in the Gulf of Mexico, away from Isaias.

The space agency and its private-sector partner are aiming for a landing near Pensacola, where waves are forecast to be around one foot.

The storm will buffet Florida from south to north throughout the day and into tonight, with the hardest-hit region stretching from Jupiter Inlet to around Jacksonville. However, the impacts may be mitigated somewhat by the fact that the storm’s strongest winds and heaviest rains are east of its center.

The tropical threat to the Sunshine State comes as officials continue to grapple with a sharp increase in coronavirus cases, hospitalizations and deaths in the past one to two months. Weather Service offices and Hurricane Hunter aircraft are staffed with crews wearing protective equipment, including masks, observing social distancing protocols to the extent possible.

The latest forecasts have the highest winds confined to the immediate coast of eastern Florida, generally north of Jupiter Inlet.

Farther inland, tropical-storm-force winds, with gusts to 45 to 55 mph, are anticipated.

Heavy rainfall is predicted to unload a broad two to four inches, with localized six-inch amounts in eastern Florida over the weekend. This could lead to some flooding.

However, rainfall amounts in Florida will feature a steep gradient if the storm’s heaviest rains remain just offshore, in which case only a broad one to two inches with localized three-inch totals would be more likely.

Impacts from Georgia through the Carolinas

On its track up the East Coast and through the Gulf of Maine, the Hurricane Center calls for Isaias to persist as a strong tropical storm.

Heavy rain and flooding, strong winds and coastal flooding are possible in coastal Georgia and the Carolinas.

The Weather Service predicts two to five inches of rain and isolated amounts to seven inches in this zone, although one to three inches is favored in southeast Georgia with a more offshore storm track.

Where the heaviest rain falls, flash, river and/or urban flooding could occur.

Along the coast, the Hurricane Center says a “dangerous storm surge” could affect the zone from Edisto Beach, S.C. to Cape Fear, N.C. “where water rises of 2 to 4 feet above ground level are possible along the immediate coastline and adjacent waterways.”

From Virginia Beach to coastal Maine, tropical storm conditions are possible from Isaias between late Monday and Wednesday from south to north. This may include very heavy rainfall, strong winds, dangerous surf and coastal flooding.

Even areas well inland from the coast, including the Interstate 95 corridor all the way west to the southern and central Appalachians, are forecast to receive two to five inches of rain, with isolated amounts to six or seven inches.

The extremely humid air transported north by Isaias will also interact with a cold front preceding an approaching dip in the jet stream. That will help to focus the rainfall and will probably cause at least isolated flooding issues, particularly in the Mid-Atlantic and along the Appalachians.

Storm sheltering during a pandemic

The coronavirus pandemic complicates the decisions both of local emergency management officials tasked with ordering evacuations and opening shelters, and residents, who may find themselves forced to use them.

On Thursday, the American Meteorological Society released guidance on sheltering during the pandemic, stressing that “if you evacuate to a shelter, you are responsible for your health.” The document notes, however, that states and municipalities that open shelters will most probably provide for social distancing and mask use, among other precautions.

They recommended that residents procure and bring their own sanitation supplies while also following Centers for Disease Control and Prevention recommendations.

The Federal Emergency Management Agency plans to rely less on deployed field teams in areas where community spread of the coronavirus is occurring, instead processing damage claims remotely. In addition, storm planning documents encourage officials to consider ordering those not vulnerable to storm surge or other flooding impacts to shelter in place.

Getting to “I” in July: Isaias in historical perspective

Isaias became the ninth named Atlantic storm of 2020, which does not usually develop until closer to early October. It’s the earliest “I” storm on record by more than a week, and the latest domino to topple in a season that has also brought the earliest-forming C, E, F and G storms on record in the Atlantic — Cristobal, Edouard, Fay and Gonzalo. Including Isaias, 2020 has produced five named storms in July, tied for the most on record with 2005.

It is the first time on record that the last week of July has produced two hurricanes (Isaias and Hanna) in the Atlantic.

Matthew Cappucci contributed to this article.