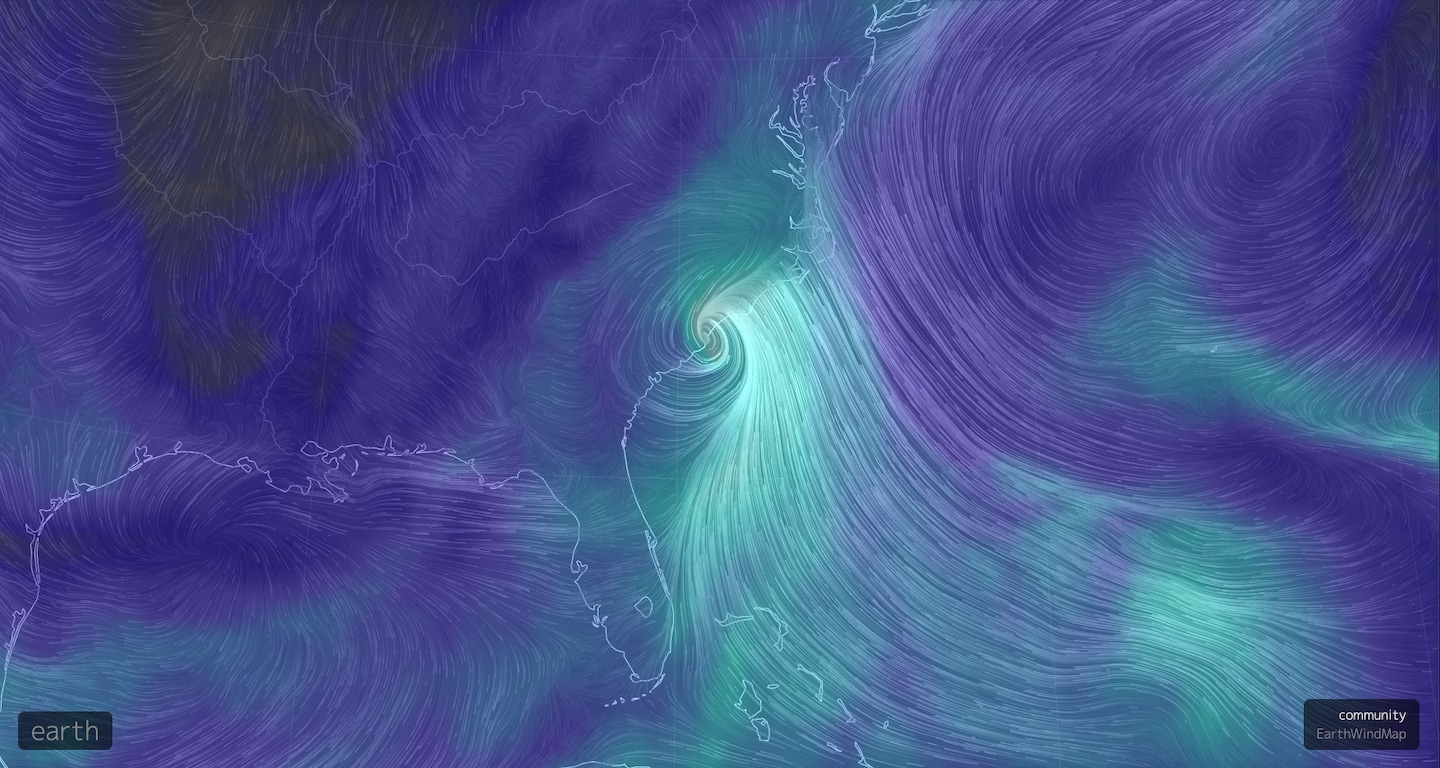 The storm will then sweep into the Mid-Atlantic region on Tuesday, likely as a tropical storm, with storm surge flooding a threat in the Norfolk and Hampton Roads area, and a windswept soaking of three to six inches of rain on tap for the Washington, D.C., metro region.

“Heavy rainfall will result in flash and urban flooding, some of which may be significant in the eastern Carolinas and the mid-Atlantic, through midweek along and near the path of Isaias across the East Coast of the United States,” the National Hurricane Center wrote.

The storm will then race into the Northeast, unleashing heavy rain, strong winds, and coastal flooding from New York to Maine. The winds could be especially intense along the Jersey shore into New York City.

Hurricane and tropical storm alerts plaster the Eastern Seaboard from Georgia to Massachusetts.

Areas at particular risk of storm surge flooding include Charleston and Myrtle Beach, S.C., and Wilmington, N.C., where the National Hurricane Center there is “danger of life-threatening” inundation along the coastline. A dangerous surge may also affect areas from the North Carolina Outer Banks to vulnerable areas in the Virginia Tidewater.

Peak wind gusts for coastal areas from central South Carolina to southern New England could reach 60 to 80 mph as Isaias makes its closest approach, with the highest values likely near the South Carolina-North Carolina border when the storm makes landfall. This is likely to cause downed trees and power outages, flying debris, and minor damage to some structures.

Isaias now and its track and intensity forecast

As of 11 a.m. Monday, Tropical Storm Isaias was centered 90 miles east-southeast of Brunswick, Ga., and about 220 miles south-southwest of Myrtle Beach, S.C., heading north at 13 mph, an increase in speed from the weekend. The storm contained maximum sustained winds of 70 mph, just shy of a hurricane intensity (74 mph), though the storm’s organization looks more ragged than it did on Monday morning.

During the weekend, the storm struggled amid a hostile environment, with winds blowing at different speeds and directions, height knocking its inner circulation off balance and dry air squelching its thunderstorms, especially on its west side.

The dry air and shear helped Florida avoid damage because the storm’s strongest winds and heaviest rains stayed to the east of the center of circulation.

However, Isaias managed to maintain its intensity or even intensify slightly over warm waters, and the Hurricane Center’s official forecast calls for the storm to regain hurricane strength before making landfall Monday night.

“The vertical wind shear that has been plaguing Isaias is forecast to abate slightly today as the storm turns north-northeastward,” the Hurricane Center wrote early Monday. “All of the intensity models shows some slight strengthening during the next 12 hours.”

Impacts from Georgia through the Carolinas

Throughout the morning, Isaias is forecast to parallel the coast of the southeastern United States, causing strong winds and squally weather in southeastern Georgia before potentially making landfall near the South Carolina-North Carolina border Monday night at hurricane strength.

As it moves north-northeastward, onshore winds gusting as high as 80 mph in parts of the coastal Carolinas will push waters onto the shoreline, piling high waves on top of the storm surge itself.

The largest storm surge is expected just north of wherever the center comes ashore, most likely in the zone from Edisto Beach, S.C. to Cape Fear, N.C. where water rises of three to five feet above ground level are possible if the maximum surge hits at high tide. A slightly lesser, but still dangerous, storm surge of one to three feet is projected along the North Carolina Outer Banks.

Areas susceptible to coastal flooding could see damage, particularly if the peak of the storm hits at the time of high tide. This includes Charleston, Myrtle Beach and Wilmington, N.C.

“Flooding from a combination of heavy rain and storm surge could become significant, especially Monday night around the time of the evening high tide. There is a potential for widespread, dangerous flooding to occur in and around the Charleston Metro Area, including Downtown Charleston,” the National Weather Service office serving Charleston stated Sunday night. The high tide in Charleston occurs at about 9 p.m. on Monday.

The Weather Service is advising coastal residents to “[p]lan for life-threatening storm surge flooding of greater than 3 feet above ground” and the possibility of evacuations.

Charleston has seen increasing instances of coastal flooding in recent years as sea level rise and land subsidence combine to make the city more vulnerable. The city saw a record 13 days with high tide flooding in 2019, according to a NOAA report that detailed the increasing frequency of so-called “sunny-day” or “nuisance” flooding that now occurs in the absence of a storm. NOAA defines such flooding as water rising more than about 20 inches above the normal daily high-tide mark.

In low-lying Charleston, storms like Isaias pose a particular hazard since they simultaneously raise water levels along the shore while dumping heavy rains, because water is difficult to pump out once the land is no longer higher than the sea.

While flooding in Charleston is likely, the latest forecast track brings the center of Isaias far enough to the east of the city and then north for landfall. This would prevent a worst-case scenario from occurring there, and instead brings the highest surge to the coast north of the city, from the South Santee River to Cape Fear, N.C..

Over a broad area of the Carolinas, including inland locations, the Weather Service predicts three to six inches of rain and isolated amounts to 8 inches. Where the heaviest rain falls, flash, river and/or urban flooding could occur. Lesser amounts, on the order of one to two inches of rain, is favored in southeast Georgia.

In addition to the wind, storm surge and rainfall hazards, Isaias will also pose the potential for waterspouts and tornadoes as the wind shear within the storm causes some individual storm cells to rotate.

From Virginia Beach to coastal Maine, tropical storm conditions are possible from Isaias between late Monday and Wednesday from south to north. This may include very heavy rainfall, tropical-storm-force winds, dangerous surf and coastal flooding.

Even areas well inland from the coast, including the Interstate 95 corridor all the way west to the southern and central Appalachians, are forecast to receive two to six inches of rain, with isolated amounts up to six to eight inches.

The extremely humid air transported north by Isaias will also interact with a cold front preceding an approaching dip in the jet stream. That will help to focus the rainfall and will probably cause at least isolated flooding issues, particularly in the Mid-Atlantic and along the Appalachians.

In the Virginia Tidewater, Chesapeake Bay and Delaware Bay, a storm surge of one to three feet above normally dry land is predicted as the by-then fast-moving tropical storm zips northward.

The Virginia Tidewater, Delmarva Peninsula, and coastal areas of the Northeast are likely to see wind gusts between 50 and 70 mph. There are signs that the wind field from the storm could strengthen and expand as the storm moves from coastal Delaware to southern New England, owing to its transition into a non-tropical system.

“Isaias is expected to bring widespread sustained tropical storm force winds and wind gusts to hurricane force to the mid-Atlantic coast Tuesday, which could cause tree damage and power outages,” the Hurricane Center stated.

The Weather Service is forecasting wind gusts to 70 to 75 mph along the New Jersey shore into western Long Island and New York City. If these winds materialize, they could result in widespread power outages. There will also be a threat for tornadoes and waterspouts, particularly from New Jersey into parts of southern New England as the storm’s squalls come ashore.

Storm sheltering during a pandemic

The coronavirus pandemic complicates the decisions both of local emergency management officials tasked with ordering evacuations and opening shelters, and residents, who may find themselves forced to use them.

Last week, the American Meteorological Society released guidance on sheltering during the pandemic, stressing that “if you evacuate to a shelter, you are responsible for your health.” The document notes, however, that states and municipalities that open shelters will most probably provide for social distancing and mask use, among other precautions.

They recommended that residents procure and bring their own sanitation supplies while also following Centers for Disease Control and Prevention recommendations.

The Federal Emergency Management Agency plans to rely less on deployed field teams in areas where community spread of the coronavirus is occurring, instead processing damage claims remotely. In addition, storm planning documents encourage officials to consider ordering those not vulnerable to storm surge or other flooding impacts to shelter in place.

Getting to “I” in July: Isaias in historical perspective

Isaias became the ninth named Atlantic storm of 2020, which does not usually develop until closer to early October. It’s the earliest “I” storm on record by more than a week, and the latest domino to topple in a season that has also brought the earliest-forming C, E, F and G storms on record in the Atlantic — Cristobal, Edouard, Fay and Gonzalo. Including Isaias, 2020 has produced five named storms in July, tied for the most on record with 2005.

It is the first time on record that the last week of July has produced two hurricanes (Isaias and Hanna) in the Atlantic.

Matthew Cappucci contributed to this article