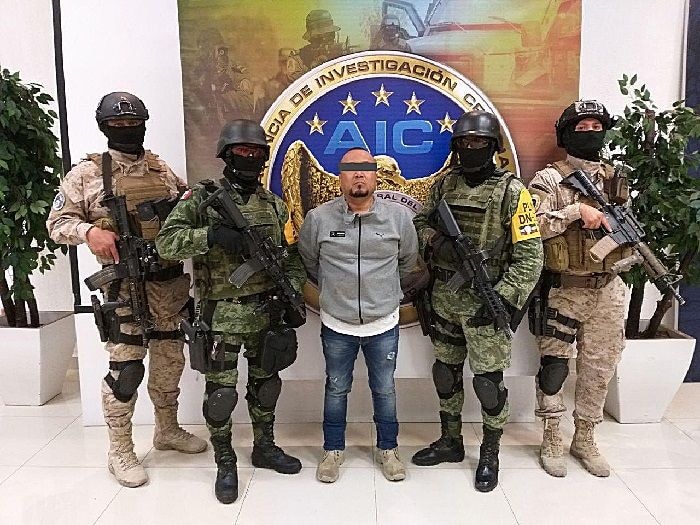 Guanajuato state Gov. Diego Sinhué Rodríguez Vallejo said the operation that led to Yépez Ortiz’s detention Sunday morning was conducted by both state and federal law enforcement, and that a kidnapped business executive also had been freed. Authorities released a photo of Yépez Ortiz wearing a Puma windbreaker and jeans, flanked by soldiers and police. Mexico’s minister of security and public safety, Alfonso Durazo, said Yèpez Ortiz would be charged with oil theft and organized crime.

Under Mexican President Andrés Manuel López Obrador, the government has struggled to articulate a coherent security strategy, even as the homicide rate has soared. López Obrador took office in 2018 after campaigning on a strategy he called abrazos, no balazos — “hugs, not bullets.” He said he would discourage young people from pursuing criminal activity by investing in education, social programs and job development — suggesting that he would not wage war on the country’s cartel leaders.

Last year, the Mexican army staged an operation in the city of Culiacán aimed at arresting Ovidio Guzmán, the son of former Sinaloa cartel leader Joaquín “El Chapo” Guzmán, who is imprisoned in the United States. But soon after soldiers detained the younger Guzmán, cartel gunmen filled the streets of the city, and he was released to avoid more violence.

This year, a video circulated of López Obrador greeting the mother of El Chapo during a visit to Sinaloa. The president called her “an elderly woman that deserves my respect, regardless of who her son is.”

In detaining Yépez Ortiz, the Mexican government has proved its willingness to pursue at least one cartel leader — but it has chosen perhaps the country’s most vulnerable kingpin, whose power was far more localized than other criminal leaders.

That power also appeared to be waning. In June, after the arrest of his mother and sister, Yépez Ortiz released an emotional video in which he teared up while thanking his supporters and threatening his rivals.

Days later, members of the Santa Rosa de Lima Cartel were accused in an attack on a drug rehabilitation center in the city that killed 28 people. That attack, and dozens of others, are believed to have been part of the bloody turf war between Yépez Ortiz and the rapidly growing Jalisco New Generation cartel.

For the Jalisco cartel’s leader, Nemesio “El Mencho” Oseguera Cervantes, Guanajuato is an important part of the drug trafficking route to the U.S. border. Some analysts believe Oseguera Cervantes attempted to reach a detente with Yépez Ortiz in 2017, and Yépez Ortiz’s reported rejection of the overture prompted the conflict.

As the organizations fight for control of Guanajuato, home to the tourist and expatriate enclave of San Miguel de Allende and international automotive factories, the state has been transformed by violence. In the first half of 2020, the state suffered 2,293 killings. It now accounts for between 15 and 18 percent of the country’s homicides, López Obrador told reporters in June.

The detention of Yépez Ortiz could clear the way for the Jalisco cartel’s takeover of Guanajuato. Mexican officials have acknowledged that when a single cartel controls trafficking routes, violence typically decreases. But the Jalisco cartel, which allegedly hired gunmen to try to assassinate Mexico City’s police chief in June, is seen as a growing threat.

In recent years, oil theft has become a major focus of organized crime, costing billions in lost government revenue. In 2018 alone, about $3.25 billion in oil was stolen, according to Pemex, the state oil company, up 5,000 percent from a decade earlier.

The Santa Rosa de Lima cartel and Yepez Ortiz were behind that surge. The large number of refineries and web of pipelines in Guanajuato made oil a natural target for the group. When the government appeared to begin cracking down on oil theft, the cartel launched a campaign of widespread extortion across the state. The 500,000-person city of Celaya briefly ran out of tortillas in 2019 because so many tortillerias had been shut down under the pressure of extortion and violence.

“Excellent news to start this Sunday: the capture of the criminal El Marro in Guanajuato,” U.S. Ambassador Christopher Landau tweeted in Spanish. “Criminals think they are so dynamic and smart, but in the end the good guys will always win.”