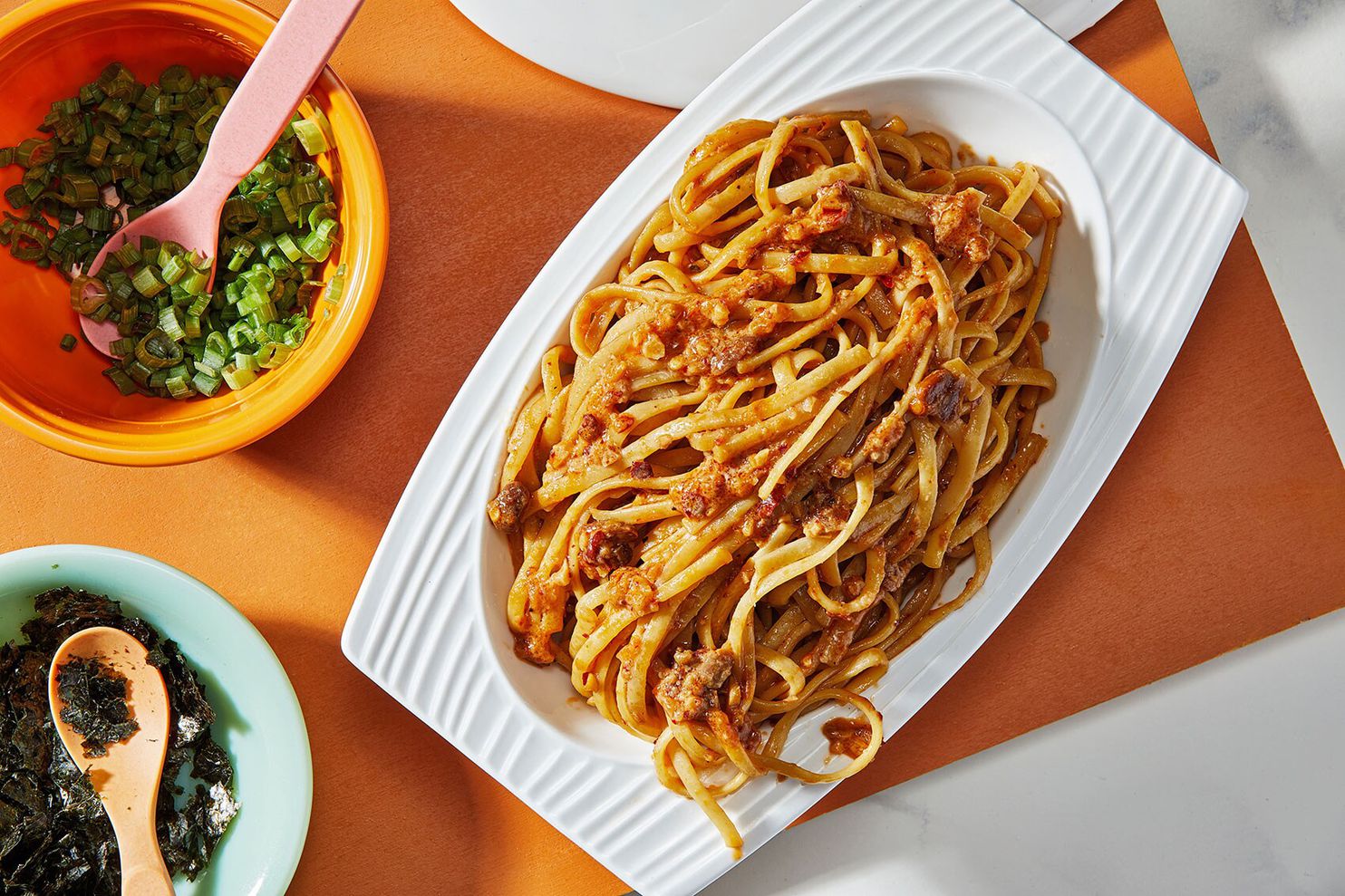 In the early weeks of the pandemic, two distinct camps of home cooks emerged online and among my friends.

There were the sourdough early adopters, let’s call them, who baked bread every day, cranked out pasta sheets at lunch, and met the challenge of carrying on amid the crisis with a sort of soldierly stoicism. I admire these can-do people.

[This spicy shakshuka is all about the sauce]

I myself belonged to the parcel-out the beans crowd, who responded to the shutdown with psychic freakout (my default setting for any crisis, although in this case I legitimately had to fear for my future after seeing my income bottom out) and braced ourselves for the real possibility that we might be forced to subsist for months, if not longer, on our hastily cobbled together stash of dried goods.

This initial panic passed, but as I accommodated myself to this drastically altered existence I began to realize I would have to become a different kind of cook. It wasn’t just that the stores didn’t always have the things I need, or that, with my budget so constricted, I now had to look upon meat and fish as splurges. It was also that cooking three meals a day, every day, was draining and required the kind of meal-planning I had never done before.

I never imagined I would solve most of my problems by reimagining the way I think about sauces.

Remarkably, it has helped me to organize — and stretch — my shopping, strategize menus for the week and save money. It has also enabled me to elevate many pantry items into something wonderful.

Pre-quarantine, I tended to regard sauces as enhancements or accents, and I generally only gave any thought to what the sauce should be after I had settled on a meat or fish. Now, it’s the opposite — the sauce is often the inspiration for the entire meal.

[You can put these homemade sauces on anything]

The sauces I have tapped for this role are not pan sauces or vinaigrettes, or the sort of light, finishing sauces that chefs are fond of applying in pretty drizzles and zigzags. These are bold, zesty sauces, sauces of body and depth. They are also wonderfully versatile and work in a wide variety of preparations and styles.

When I am on top of things, I’ll set aside a portion of Saturday or Sunday afternoon to make a couple of sauces, preparing them in big batches.

Sometimes, I simply reheat a portion of that sauce and build my dish from there. Other times — and this is the fun part — I treat the sauce as a base, adding an ingredient or two to the mix. This way, I can spin out a multitude of dishes and flavors from a single source.

One Sunday, for instance, I made moqueca, a zesty Brazilian stew built with tomatoes and coconut milk. Moqueca is typically a showcase for seafood, but I didn’t have any fish that week. I did, however, have a head of cauliflower, which — after I’d broken it down, spiced it and slow-roasted it — became an ideal delivery system for this gorgeously thick, coral-colored sauce.

A few nights later, I blended some of that sauce with a single roasted pepper from a jar, brought it to a bubble on the stove and cracked in a few eggs — voila! Moq-shuka, as I have since come to call it, a neat twist on the Mediterranean Arabic dish shakshuka. Sometimes, you see moqueca prepared with chicken, and with the remainder of my sauce, I had the idea to create a variation on the sloppy joe, grinding up half a package of chicken thighs, sauteing it in the pan with onions and garlic and tossing it with the sauce.

More recently, I made a batch of romesco, a Spanish sauce of roasted peppers, garlic, almonds, fried bread and paprika, that (with tweaking) I managed to extend to five meals. The first of these was bucatini with a zesty, smoky marinara, which I made by adding half a can of San Marzano tomatoes to a portion of the sauce and pureeing it to a velveteen smoothness.

Two days later, I added chicken stock flavored with Parmigiano rinds to the batch sauce, creating a rich stewing liquid that turned a simple Saturday lunch of canned beans into something that didn’t taste at all like a shortcut. The following Monday, I scored a filet of salmon in my delivery that was more than decent-looking, and a sauce of romesco, olive oil and vegetable stock provided the broth I used to poach it.

These alterations of the base are more than just stylistic; they are a practical necessity. My audience might be a captive audience, but it is also restless. I don’t want to risk pushing them over the edge by giving them the impression that I am performing the culinary equivalent of pounding on the same key.

I have seven batch sauces in rotation right now, but there’s one I am commanded to make weekly, and that’s the sauce I have taken to calling “Umami Bomb” sauce. My kids clamor for it. They can smell it from the next room. And no kidding: miso, Parmesan, chicken stock, bean paste — every item a glorious testament to fermentation and concentrated flavor.

Toss it with ziti or rigatoni, and it tastes like a sophisticated mac and cheese. Add it to linguine, and sprinkle in some crumbled nori, and it’s a neat alternative to carbonara.

“Daddy, is this Japanese or Italian?” my older son asked one night.

Both, I said, smiling, and told them about the Japanese tradition of itameshi, which interprets the dishes of the latter through the lens of the former.

On a practical level, what tradition this sauce might belong to matters less to me than that it ticks off all the boxes on my daily checklist for cooking in quarantine: adaptability, affordability, deliciousness.

Toss this umami-rich sauce with your favorite pasta; or use it to add big flavor to roasted broccoli or cauliflower or grilled chicken.

In a large nonstick or well-seasoned cast-iron skillet over medium heat, heat the oil until shimmering. Add the onion, garlic and a pinch of salt, and cook, stirring, until the onion is softened but not browned, about 4 minutes. Add the miso and doenjang and stir until it resembles a loose paste that can be moved around easily in the pan, 2 to 3 minutes.

Add the chili crisp and chili oil and stir to combine. Add the chicken stock and cook, stirring, until the mixture thickens so that a spoon leaves a wide trail when dragged through, about 5 minutes.

Reduce the heat to low. Add the cheese, a few generous pinches at a time, stirring continuously until it becomes a smooth sauce. Season with pepper, taste and add more salt, if desired. Keep the sauce over a very low heat, stirring occasionally, while you prepare the pasta.

In a large pot, add enough salted water to cover the pasta by about 1 1/2 inches (the more water you add, the more you dilute your chance at the cloudy starch water you want). Bring to a boil over high heat, add the pasta and cook for 3 minutes less than the package directions suggest. Drain, reserving the pasta water. (If you have leftover pasta with the sauce, you will want the reserved pasta water for reheating.)

Raise the heat under the skillet to medium-low. Transfer the drained pasta to the skillet and toss in the sauce until combined. Add about 1/4 cup of the pasta water and stir the sauce-covered pasta for 1 minute. The sauce will become somewhat looser. This is what you want — a wetter sauce where your pasta cooks to al dente. Repeat this process two more times, allowing 1 full minute of mixing between the additions of water, for a total of 3 minutes. The starchy water will act as a binder, enabling the sauce to cling to the noodle.

Remove the skillet from the heat and let the pasta cool for 2 minutes. For little more oomph, garnish with a handful of finely diced scallions and/or crumbled nori.

NOTE: If you plan to reheat the sauce, reserve the pasta water to use when warming.

Recipe from food writer Todd Kliman, a two-time James Beard Award-winning writer and author. He is on Instagram @todd_kliman and Twitter @toddkliman

Did you make this recipe? Take a photo and tag us on Instagram with #eatvoraciously.

Browse our Recipe Finder for more than 9,000 Post-tested recipes at washingtonpost.com/recipes.