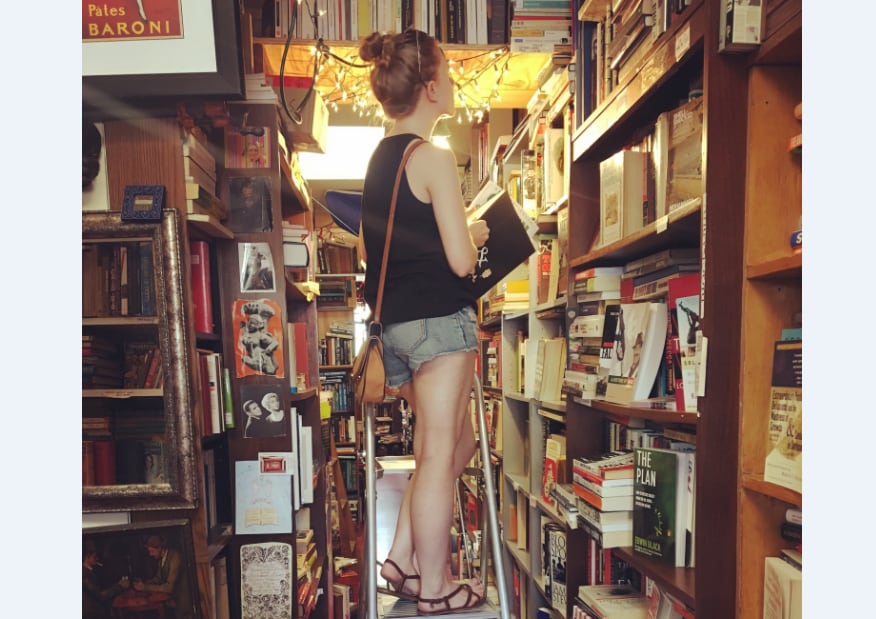 But on occasion, Smreker unearths misplaced gems: photographs that tell a story, a poignant poem or a letter that never got sent.

“I have a fascination with old things because you feel like you’re holding a time capsule,” Smreker said. “Although you don’t know who these people are, finding their things brings you closer to the person that once held the book before you.”

Smreker revels in these rare cases, she said, and makes it her mission to seek out the original owners of the long-lost tokens. Her goal is to reunite them with their keepsake and to learn their story.

To her surprise, she’s had some great success.

Most recently, after more than a year of searching, Smreker managed to find a father and daughter, pictured in a photo booth strip from 13 years ago that was left in a book.

Smreker came across the book, titled “We Don’t Die: George Anderson’s Conversations With the Other Side,” more than a year ago at a Half Price Books in Oklahoma City. Once she discovered the photo strip wedged between two pages, Smreker was determined to find the people in the picture.

Still, Smreker refused to give up. She reached out to local news stations, asking if they would consider covering her search and put a call out to the community to see whether anyone knew the dad and daughter. KOCO-TV aired the story on July 16.

“A few days later, I got a message on Instagram from the wife of the man and mother of the little girl,” said Smreker, who immediately called Maria Meagher, the woman who reached out.

When the photo was taken, the little girl, Sofia Meagher, was 4, and her father, Tom Meagher, was 44. They were at an amusement park — a family tradition whenever they would visit Tom’s parents in Santa Cruz, Calif.

The Meaghers lived in Oklahoma at the time but moved to San Antonio a few years ago.

“We still get the local Oklahoma news,” said Maria Meagher. “I turned on the 10 o’clock news, when they showed a ‘coming up next’ clip, and I swore I saw Tom and Sofia.”

She instantly summoned her family to the television, and after a short commercial break, “sure enough, there they were,” said Maria. “It was such a crazy surprise.”

“I would never have imagined something like this happening to us,” Sofia Meagher, who is now 17, said. “It brought back so many memories from when I was younger.”

Tom Meagher agreed. “It was definitely a little startling to see we were on TV,” he said. “But seeing Sofia so young brought a tear to my eye.”

After connecting with the Meaghers, Smreker mailed them the photo strip, which they said they’re going to frame.

“Emma is a bright light,” said Maria Meagher, adding that her family hopes to meet Smreker in person if they’re ever in Oklahoma. “It was a very nice treat in such a dark time.”

The Meaghers aren’t the only people to whom Smreker has sent lost mementos.

Her captivation with used books and, more specifically, the relics that occasionally lie within them started two years ago, when her husband gifted her a vintage French book. Burrowed between the pages was a crinkled receipt from a cafe in Montreal.

She wondered how the book got from Canada to Oklahoma City, and whose hands had turned the pages before her own.

“I thought about the person who had this book before me and what their day was like,” said Smreker. “Did they buy this book and then stop by the cafe and have a snack while they read?”

As a French teacher, “I also wondered if their first language was French, or if, like me, it was their second language.”

“I started wondering about the history of things I own,” Smreker continued. “I began going through books in my house and finding what little impressions had been left, like notes in the margins. I decided to create a photo documentation project.”

“It started as just a fun hobby for me. I never thought I would gain much of a following,” said Smreker.

But she quickly discovered that many others shared her fascination and were eager to peek at the personal possessions people often unintentionally leave behind.

Over the past two years, Smreker has found hundreds of neat trinkets and reunited several lost items with their rightful owners.

She once found a 127-year-old unpublished handwritten letter in a book of poetry she bought at a flea market. The letter was addressed to the Lancaster Gazette, a newspaper in Lancaster, Ohio.

The letter contained a poem called “Spring, Goodbye,” and was signed by Ed Ruffner.

Smreker started searching on ancestry websites to locate Ruffner’s descendants, and within a day, she found them.

“I learned from his family that he was actually quite a prolific poet and had published things in the paper before,” said Smreker, who scanned a copy of the poem and sent it to Ruffner’s family. “I assumed that the poem did not make it to the newspaper he intended to send it to, and I was hoping to finish the journey for him.”

Smreker contacted the paper (now called the Lancaster Eagle Gazette) and asked about the potential of publishing the poem. Last year, it was printed on the front page.

“It was important to me that his words finally ended up where they were supposed to be,” said Smreker.

She recently found an old photo of two little girls — who appeared to be sisters — cushioned in the pages of “When Madeline Was Young” at a used bookstore in Arkansas.

The image happened to have a name on the back, and after a quick Google search, she found one sister on Facebook and connected with her.

“We got a huge kick out of it,” said Kara Beane, 31, one of the two sisters in the photo. “It’s so nice to see something so simple yet so impactful.”

Smreker said her search for secondhand souvenirs has taught her to appreciate the little things in life.

“We do these tiny little gestures that leave a piece of who we are behind, and we don’t think about it all that much,” she said. “There’s just something romantic about how we are actually connected to so many people we’ve never met before.”