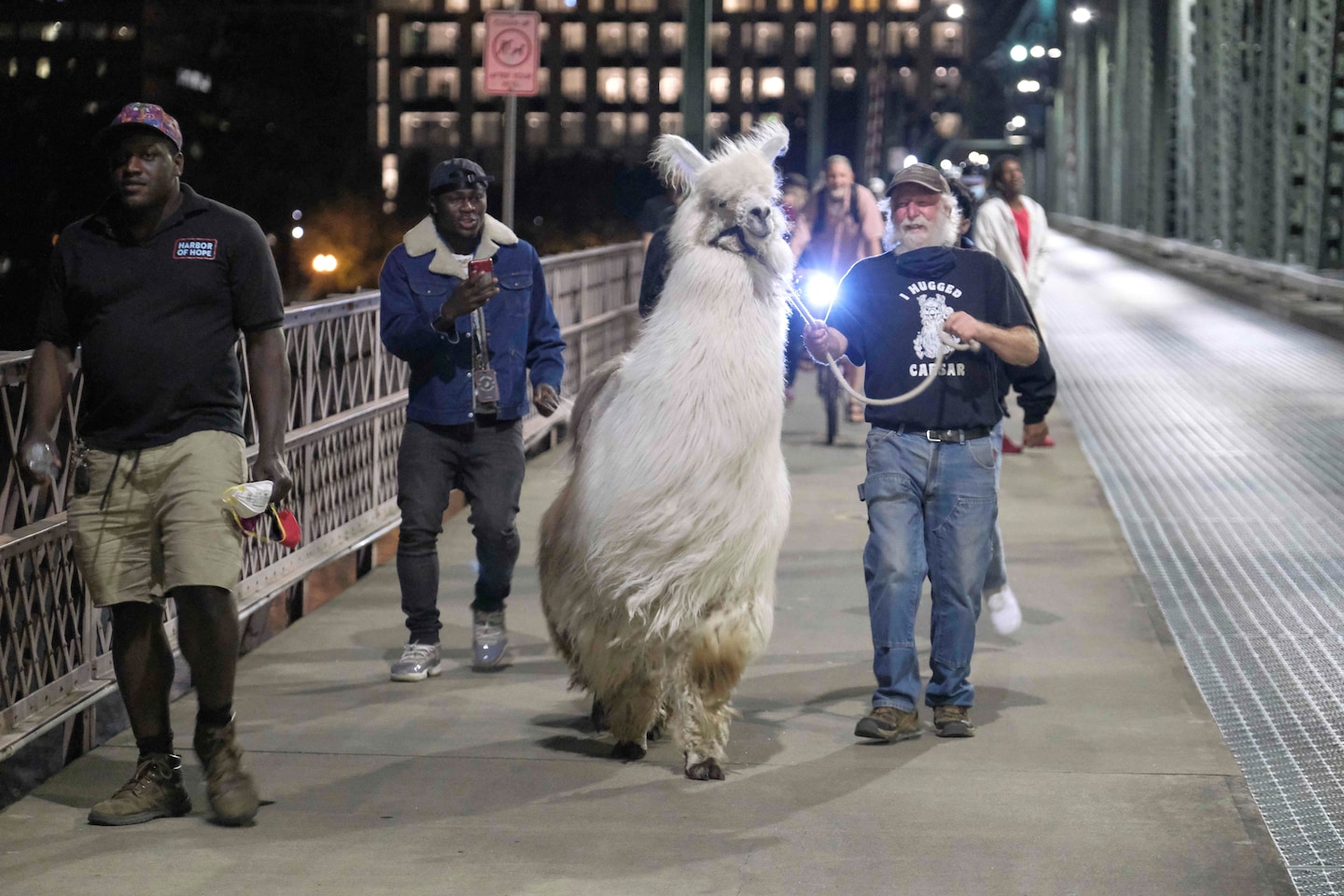 He’s somewhat of a celebrity llama.

Llamas generally are not known to be cozy with humans, and at 5-foot-8 and 350 pounds, Caesar could appear intimidating. But Caesar doesn’t turn from affection or back away from chaos. When people meet Caesar, they tend to melt in his calm presence, said his caretaker, Larry McCool, who lives in Jefferson, Ore., on the Mystic Llama Farm.

“I don’t care how big, how staunch, how intense that somebody is — it could be a big marcher in total riot gear, and he will come up and give Caesar a big hug,” said McCool, 66. “It’s all I can do to just keep him from snuggling.”

Caesar and McCool were at a Portland protest late last month, standing in Pioneer Square with 10,000 protesters when violence broke out in the distance. People were shouting and flash bombs were being deployed by police. McCool said he quickly moved Caesar, emphasizing that he is careful about Caesar’s safety.

He said that when protesters later saw Caesar — his long, regal neck making him the height of a person — they stopped to pet his soft wool. His calm demeanor rubbed off on them, McCool said.

“They’ll be clapping, chanting, stomping, and all of a sudden I’ll get up with Caesar and the next thing I know, everyone will just band around Caesar,” said McCool, who spent four hours there, leaving at 11 p.m.

Police sometimes react to Caesar the same way protesters do, McCool said. During a recent large protest in Portland, Caesar and McCool ambled by a group of Portland police officers who were stationed in a parking lot near the unrest. The officers pet Caesar and asked to take photos, McCool said. The same thing happened at the Salem Women’s March this year.

“Caesar brings calm and defuses tension within these extremely volatile situations because everyone loves him as much as he loves everyone,” McCool said.

So far this year, Caesar and McCool have attended 10 Black Lives Matter protests in Oregon, including five in Portland’s epicenter, to offer support and a tranquil presence to protesters. In recent years, they have attended more than 50 marches in support of a variety of civil and environmental causes.

McCool says he’s never felt either of them has been in danger during the protests.

“We’ve been there and heard the flash bombs going off, we’ve smelled the tear gas, but we make sure that we get out safely,“ he said, adding later, “I will remove him before anything like that could become dangerous.”

When they were at a recent march in Portland, leaders of the Black Lives Matter movement came up to them, concerned about Caesar, to make sure that he was doing okay.

“Everyone is looking out for our best interests as much as we’re there for them,” McCool said. “We don’t want to detract from anything. We don’t want to lessen the magnitude of the BLM movement. We recognize how important it is.”

McCool has owned the Mystic Llama Farm for about 20 years and cared for dozens of llamas. But when he met Caesar in 2015, he immediately noticed that Caesar was unusual.

McCool purchased him and showed him at the Oregon State Fair for a year before transitioning Caesar into becoming a therapy animal.

Caesar genuinely enjoys interacting with people, McCool said, and radiates a sense of warmth similar to some dogs.

“He’s a magical creature,” McCool said. “I wish I could take some credit for him, but he’s developed all on his own. I’ve been his tutor and his guide, but sometimes I’m the one following him.”

When they’re not protesting, McCool and Caesar go to retirement homes to visit residents outside their windows. Before the pandemic, they would go to schools, malls and visit foster children and people with special needs. The visits are on a volunteer basis, though sometimes McCool accepts donations to offset transportation and other costs.

“As a llamactivist, we also do a lot of social and charity functions outside of our presence at protests,” McCool said.

Oregon-based artist AnnMaré Cruz and her toddler son met Caesar in January 2019 while they were recycling their Christmas tree at Mystic Llama Farm. Cruz was taken aback by Caesar’s gentle demeanor with her son, and was inspired to create a drawing of Caesar and McCool, which McCool uses as his Facebook profile image.

“He’s just the softest, most adorable llama that’s lovely to be around — and he gives an especially good hug,” Cruz said. “He inspires a calming presence, one of happiness.”

Another Caesar fan, Trish Conlon, has met Caesar twice — first at the Women’s March in Salem a few months ago and more recently at a Black Lives Matter protest in Salem.

“There’s a ‘lightness’ in the air when he’s around, and that’s what people especially need right now,” Conlon said. “People would see him and just smile. Not that you could see a smile as well, behind a mask — but you could tell that their faces would just light up.”

McCool said he is willing to spend the time and money that it takes to participate in these activism events. It’s about a 150-mile round-trip drive to Portland from the farm where they live, but McCool doesn’t mind making the journey, and Caesar “travels in style” behind McCool’s truck.

“He has his own trailer behind my truck that he travels in, with two inches of foam padding. He doesn’t rough it too much — he’s a pretty pampered llama,” McCool said.

McCool said Caesar is able to go to protests and other events that some people might not be able to attend because of the novel coronavirus or other reasons.

“He’s doing what other people can’t do — he’s able to get out to these events and do this for them if they can’t make the trip themselves. His goal in life and his purpose is to soothe people,” McCool said. “I have to believe that he and I were put together for a reason. I’m not just his caretaker — we’re partners.”