In a bleak economy, these companies are flourishing 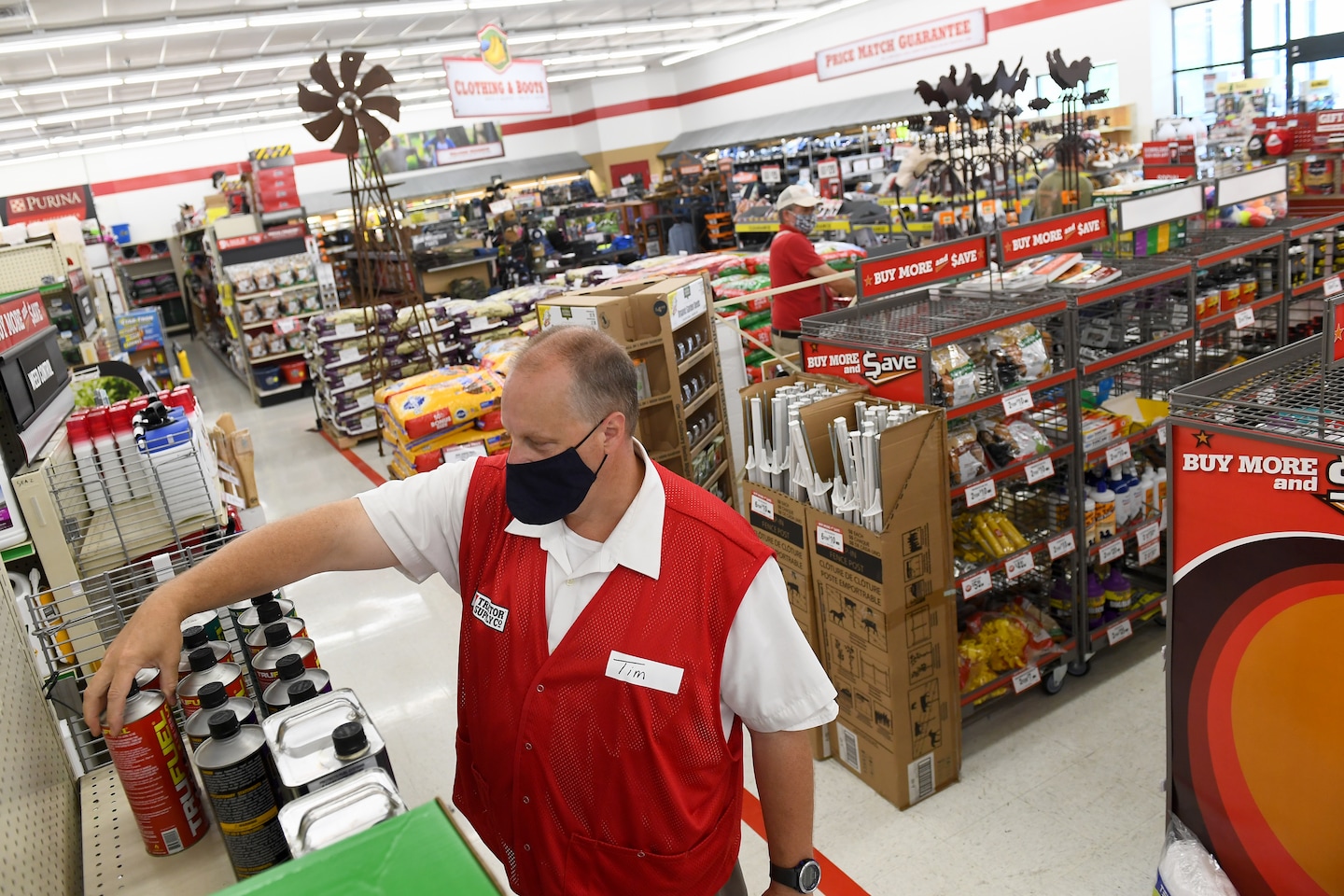 “It’s been very steady,” said Tim Linch, 51, the store’s manager. “Early on, when everybody else was closed, people were coming in just because we were open. I’ve never seen so many people thank me.”

Tractor Supply’s good fortune — second-quarter profits jumped more than 50 percent — not only seems at odds with the overall collapse in business activity across the country, but also reflects the economic remodeling that the pandemic has unleashed. With record sales and earnings, the rural-oriented retailer is among a select group of companies that are prospering despite — or in some cases because of — the pandemic.

The rise of some companies, and the fall of others, comes as the economy struggles to recover from the record 9.5 percent quarterly decline in economic activity over the spring.

But rather than a temporary interruption of normal commerce, the global health scare and subsequent recession is altering spending, saving and investing patterns across the $19.4 trillion economy.

“The longer it goes on, the more lasting the ramifications will be,” said Bill McMahon, chief investment officer for active equity strategies at Charles Schwab Investment Management.

Investors are struggling to distinguish between fleeting and permanent changes. Already, clothiers specializing in attire for offices that people no longer frequent such as Brooks Brothers are sliding into bankruptcy while producers of more casual garb like Lululemon prosper.

In the days ahead, Americans may leave the cities for suburban and rural areas, denting prospects for commercial real estate and boosting the residential market. Cashless payments could finally eclipse traditional currency.

Not all of the changes have solidified. But the emerging new normal will mean less money spent on air travel and more on stay-at-home comforts, which explains disappointing earnings from commercial airline maker Boeing and engine manufacturer General Electric.

When nonessential businesses began shutting down in March, many economists anticipated a brief interlude that would allow the United States to “flatten the curve” of the pandemic before resuming normal life.

In a March 11 Oval Office address, President Trump called the shutdown “just a temporary moment of time.” His administration three weeks later introduced a Paycheck Protection Program designed to provide small businesses an eight-week financial bridge to see them through the maelstrom.

Now, what initially seemed like an economic pause is becoming a more-thorough makeover. Amid the second-quarter carnage that included gross private investment plunging by nearly one-half and consumption expenditures falling by more than one-third, Americans increased spending on just a few categories, including motor vehicles, recreational goods and housing.

David Kotok, chairman of Cumberland Advisors, likens the ongoing transformation to the difference between the Grand Canyon’s northern and southern rims. Much of the view is the same in each place, but the plant and animal life, even the weather, is distinct.

Last month, Procter & Gamble reported strong quarterly earnings, including a 14 percent sales gain in detergents and household cleaners, as Americans scrubbed and cleaned to ward off the coronavirus.

The reshaping of consumption also is leaving a mark on media and entertainment provider Comcast. As consumers hunkered down, revenue for the company’s theme parks evaporated. Attractions such Universal Studios Hollywood remain closed and the company collected just $87 million at its theme park turnstiles, down 94 percent from $1.5 billion in the same period last year.

At the same time, Comcast reported a record second-quarter net gain in cable customers and its highest increase in high-speed Internet hookups in 13 years.

“I am confident in our ability to continue to successfully navigate the impact of covid-19, and emerge from the crisis even stronger,” chief executive Brian Roberts said in a news release.

Work-from-home may be starting to feel like a form of house arrest for millions of American workers, but for some companies it’s become a bonanza. At Tractor Supply, business has been remarkably good throughout the pandemic, said Rose Hernandez, 35, a company veteran who is helping train newcomer Linch.

“Our hips are constantly buzzing,” she said, gesturing to the cordless phone that employees carry on their belts. “The flow is a lot faster.”

Tractor Supply has its roots in the Great Depression, when Charles Schmidt, a 26-year-old floor-sweeper at a Chicago brokerage, launched a mail-order parts business from his home. Eighty-two years later, the companies that are managing to surmount a contemporary landscape of double-digit unemployment and business closures share a few traits.

They are in the right position to capitalize on shifting consumption patterns, as the pandemic obliterates demand for goods or services that require sustained face-to-face contact. Their balance sheets are armored against sudden financial damage. And their management teams demonstrate agility in adapting to a reshaped marketplace.

Tractor Supply ticked all three boxes. Its outdoor focus — offering kayaks, hiking boots and farm equipment — is in sync with consumers’ desire to escape their homes without coming too close to others.

A nascent population shift out of cities as commuting patterns dissolve is bringing the retailer new customers at the fastest rate in company history. These new shoppers are younger, more affluent and disproportionately female. Trying to ride out the pandemic at home, they purchased steel tanks meant for watering livestock and transformed them into makeshift swimming pools while using horse-stall mats for yoga routines.

Tractor Supply boasts a cash reserve of $1.2 billion along with an untapped $500 million credit line. And the company has introduced a new mobile app, website and marketing strategy while hiring more than 5,000 new employees.

Tractor Supply’s stock price is up more than 100 percent since its mid-March low. Its second-quarter sales of $3.2 billion rose 35 percent from the same period last year.

The 13,700-square foot Leesburg store opened in 1997, when surrounding Loudon County was home to less than half of its current 414,000 residents. What was once farmland has rapidly suburbanized in recent years.

When the pandemic hit, the company increased wages by $1 an hour and accelerated an e-commerce push.

Just inside the Leesburg store, a wire rack holds tarpaulins, bungee cords and other items customers have ordered online for pickup. Contactless payment was installed for Apple and Android users, part of a broader information technology overhaul that will roll out expanded WiFi services.

Even as jobs were melting by the millions elsewhere, Tractor Supply added more than 5,000 new employees in the second quarter. In Leesburg, five spots were filled as people who’d seen their jobs eliminated by the pandemic scrambled to regain a foothold in the labor market.

“A lot of the companies they worked for previously aren’t there any more,” Hernandez said.