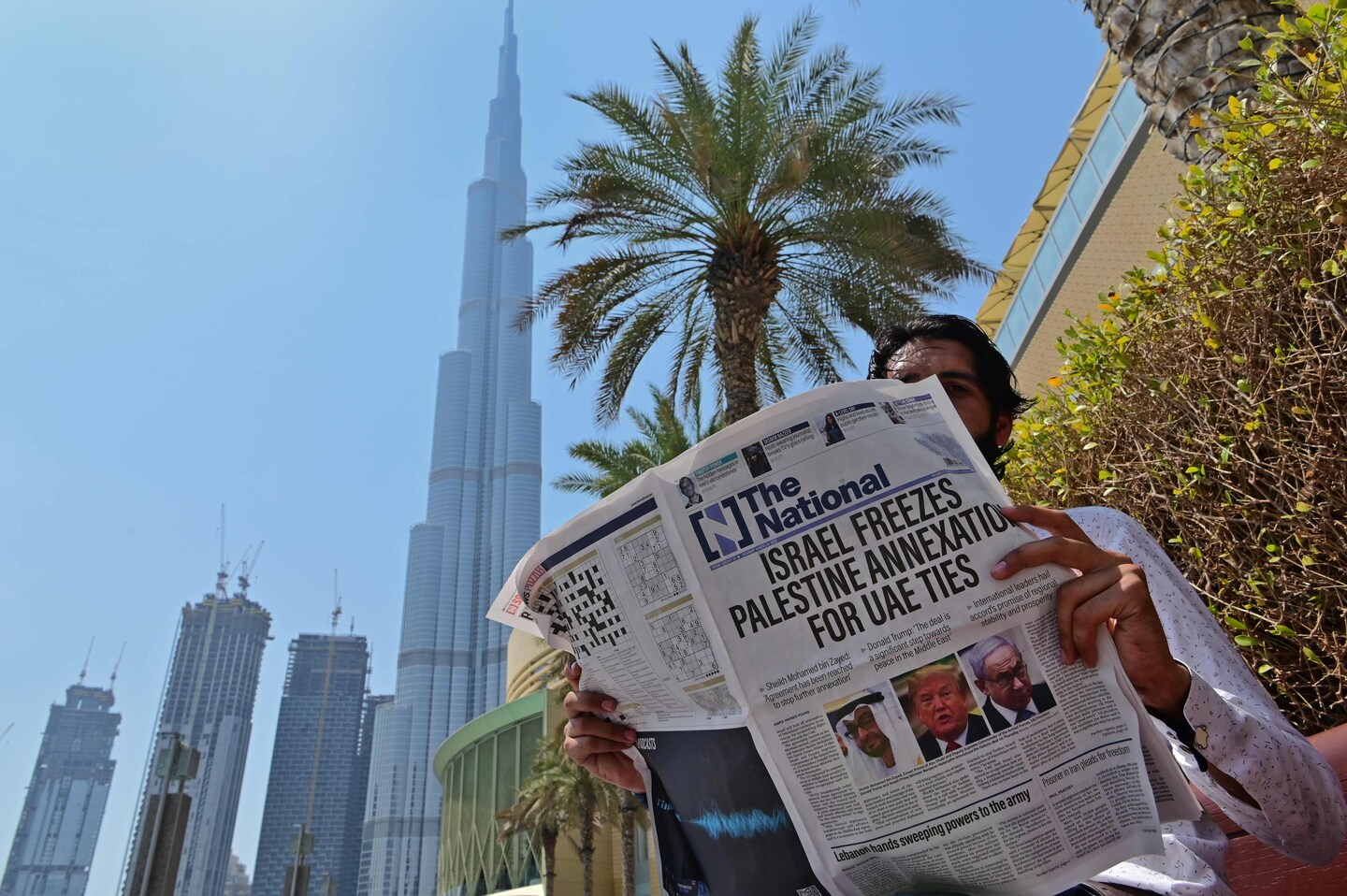 And it didn’t go very well. One of Gold’s colleagues tweeted enthusiastically about the visit, which coincided with an energy conference. An Israeli newspaper ran a story hinting that the mission was about more than solar panels.

The Emiratis “weren’t pleased,” said Gold, the Israeli Foreign Ministry’s director general at the time. “By the time I got back to Israel, I realized we had a crisis on our hands.”

That episode was one step in a delicate, at times awkward process that the two countries have pursued for years in surreptitiously building the diplomatic, security and business ties that culminated in Thursday’s announcement that full diplomatic relations were on the way.

In a surprise deal announced by President Trump, Israel and the UAE agreed to exchange ambassadors, enhance security and commercial ties, and allow direct flights. The UAE would become only the third Arab country to have active diplomatic relations with Israel.

As part of the deal, Israel agreed to suspend its planned annexation of land in the ­occupied West Bank. But the agreement left unaddressed the ­Israeli-Palestinian conflict, which has long underpinned the animosity between Israel and much of the Arab world.

According to U.S. administration officials, other Persian Gulf states are poised to follow the UAE’s lead and establish diplomatic ties. Bahrain and Oman, for instance, which have previously signaled an openness to Israel, both welcomed the agreement.

For Gold and others involved, the breakthrough was the natural culmination of the much quieter courtship.

“I’ve been thinking of how the West went through Hong Kong to get to China,” Gold said of the oblique approach the countries needed to get close. “You don’t have full relations, but you get in for a view of things that interest you.”

Intelligence was an early point of contact between Israel and the UAE, dating to at least the 1970s and continuing ever since, according to Yossi Melman, longtime intelligence columnist for the daily Haaretz.

Every head of Israel’s Mossad intelligence agency since then has had a relationship with his counterpart in the UAE. And as Israeli intelligence officials left the service, many went into security businesses that found ways of selling goods and services to the Emirates and creating some of the first and most important commercial ties between the countries. The pace of those contacts accelerated after Israel and the Palestinians signed the Oslo peace accords in 1994.

“It was a revolving door,” Melman said.

But more than security ties were developing in the early years of contact. A decade before Gold and his Israeli colleagues established a foothold at the International Renewable Energy Agency, Jon Medved, chief executive of a Jerusalem-based venture fund, began making trips to the UAE using his U.S. passport, he recalled.

After he helped launch a tech start-up that developed video ringtones, the firm began signing contracts in the UAE with entertainment and other companies. When he and his team met with their Arab counterparts, their Israeli identity was an open but delicate secret.

“They used to joke, ‘We need you to visit our training center in Lebanon,’ ” referring to a country where Israel has fought multiple wars, he said.

At the time, Medved said, only those Israelis with second passports from other countries dared to make the trip, and only a few deals a year were reached.

During the administration of President George W. Bush, Israeli officials visiting Washington would hold secret hotel room meetings with the UAE’s influential ambassador to the United States, Yousef al-Otaiba, according to Dan Shapiro, who would later become a U.S. ambassador to Israel. Shapiro served on President Barack Obama’s National Security Council and said the White House at that time was kept informed of the meetings.

In early 2010, the contacts came to halt when the UAE accused Israel of assassinating Mahmoud al-Mabhouh, a leader of the militant Palestinian group Hamas, in a hotel room in Dubai, the UAE’s largest city. Emirati Crown Prince Mohammed bin Zayed al-Nahyan cut off most contacts until he was reassured that such a killing wouldn’t happen again and Israel agreed to sell the UAE weapons technology that it had been holding back, Shapiro said.

The Washington contacts resumed, and around 2011 the parties would sometimes allow a White House official to sit in, particularly when discussing the growing threat from Iran. “That was a noteworthy moment, that they were willing to be that open, even with us, about how far they had gotten together,” Shapiro said.

Israel and the UAE, like other Arab countries in the Persian Gulf, view Iran as an adversary, and their shared concerns have drawn them even closer. Both countries strongly opposed the 2015 nuclear deal that the United States and other world powers signed with Iran.

“I found them to be very friendly, very knowledgeable,” Danon said of his Emirati counterparts in an interview. “They said, inshallah, I could help them when I got back to Jerusalem.”

Slowly, the two sides were creeping toward “normalization.” For Israel, that represented the yearning of a newcomer eager to be accepted by its neighbors. To many if not most Arabs, normalization represented appeasement of the enemy.

But while some in the Persian Gulf were uncomfortable, more and more Israelis were finding their way to sporting events and conferences in the UAE.

In 2017, when a 17-year-old Israeli judo star mounted the podium with a gold medal at Abu Dhabi’s international championship, officials replaced the Israeli national anthem with the anthem of the International Judo Federation. But the next year, when an Israeli won again, UAE officials played the Israeli anthem, “Hatikvah,” and the Israeli culture and sports minister, who was present, was caught on camera crying.

The announcement Thursday that the UAE and Israel were ending their historic enmity has fueled speculation about which Persian Gulf country might step forward next.

The foreign ministers of Israel and Bahrain held their first public meeting last year, and Bahrain was among the first Arab states to publicly embrace the Emirati agreement this week. Oman hosted Netanyahu on a state visit in 2018, and the Omani Foreign Ministry called the agreement announced Thursday “historic.”

But Saudi Arabia, traditionally the region’s most powerful Arab country, remains unlikely to pursue ties with Israel in the short term, analysts say. Saudi Arabia has been a key supporter of the Palestinians and was the prime backer of a regional initiative that offered normal Arab relations with Israel in exchange for an Israeli-Palestinian peace accord that included Israeli withdrawal from occupied lands.

Jon B. Alterman, senior vice president of the Center for Strategic and International Studies, said that Saudi Crown Prince Mohammed bin Salman probably supports the UAE’s initiative. But Alterman said there was “every indication that MBS would have trouble embracing it quickly” because of objections from the kingdom’s powerful clerics and because the Palestinian cause, in Saudi Arabia and across the Arab and Muslim world, remains an issue with “moral weight.”

The UAE, however, has developed a reputation for striking out on its own.

In recent years, Israelis have openly been guests at some of the UAE’s most public gatherings. Ten years ago, Gold had to appear by video link at a Abu Dhabi conference. But last year, Medved, the investor, spoke from the dais at the SALT investment conference sponsored by the UAE’s sovereign wealth fund.

Most visibly, Israel was invited for the first time to build a pavilion at Dubai’s Expo 2020, an over-the-top carnival of commerce that attracts trade and industry officials from around the world.

Tel Aviv architect David Knafo designed a seven-gated open-air pavilion and is supervising the Emirati construction firm building it. (The pandemic forced the postponement of the expo until next year.)

“It’s going to have a double meaning now,” Knafo said, referring to the newly formal friendship between Israel and the UAE. “It’s going to mean that we are accepted.”

Kareem Fahim in Baltimore contributed to this report.