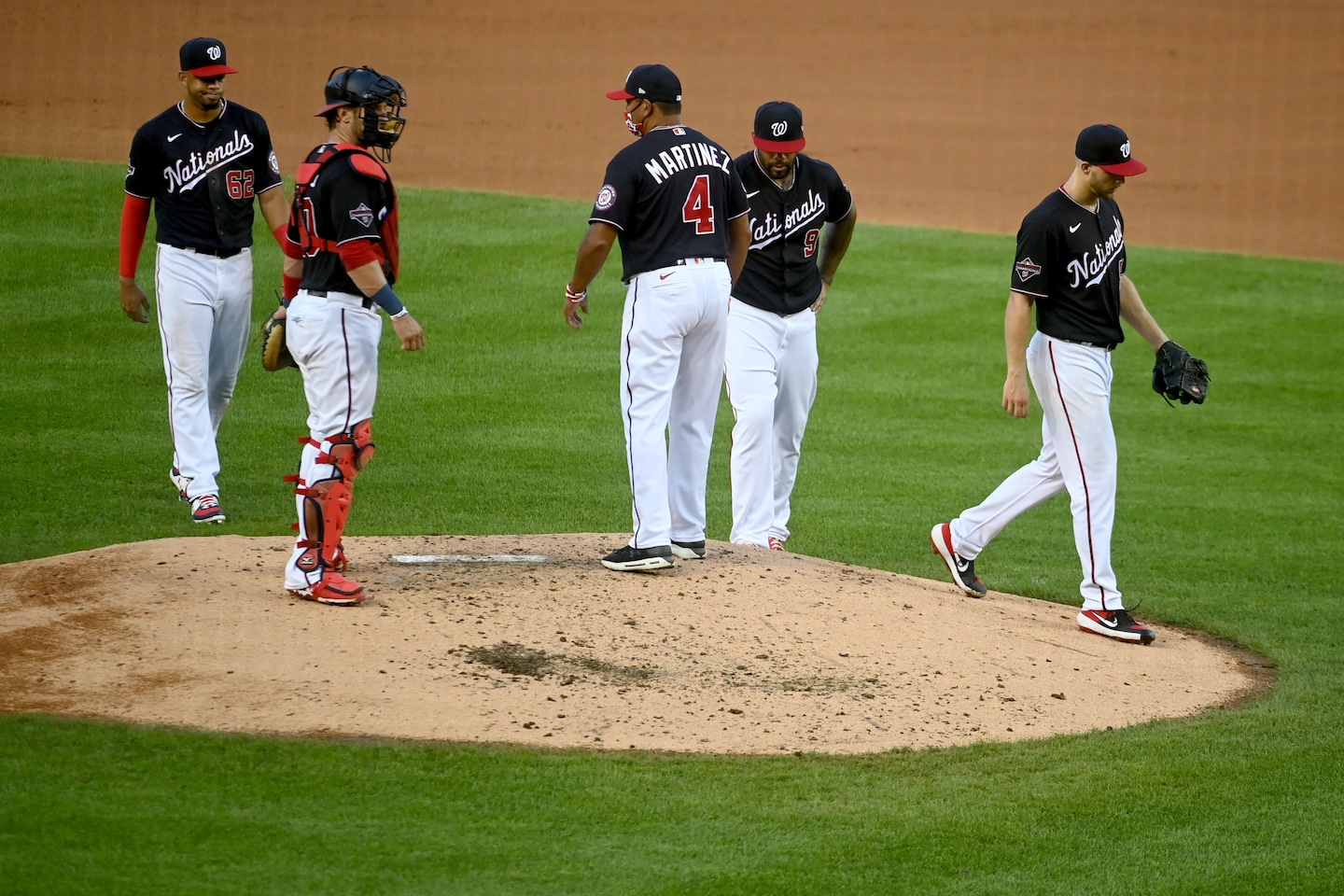 Voth allowed six runs in all, five coming in a crooked fourth that ended with the Nationals in a 7-0 hole. He lasted just 3⅔ innings. His ERA is 6.65 through five appearances.

Juan Soto cracked four hits in five at-bats and Adam Eaton lined a three-run homer in the eighth, but Voth left a steep climb that the bullpen lengthened. The Nationals dropped three of five in this series to a Marlins club that entered on a five-game losing streak. Washington is now 11-15 and, with an expanded postseason field, still in whiffing distance of a playoff spot.

“I’m not going to jump to conclusions tonight,” Manager Dave Martinez said when asked whether he will consider taking Voth out of the rotation. “I don’t do that, as you guys know. I’ll assess everything and I’ll talk to him tomorrow and we’ll go from there.”

Around 2:30 p.m., hours before Voth was rocked, Martinez looked like this on a Zoom call with reporters: hat covering his face, shoulders slack against his chair. He was mimicking his reaction to the club’s latest injury, stretching a list that already included Stephen Strasburg, Starlin Castro, Sean Doolittle, Sam Freeman and Roenis Elías.

And now rookie pitcher Seth Romero is out with a fractured right hand, with Martinez saying he used his hand to break a fall after slipping on the stairs Saturday night. The Nationals put Romero on the 10-day injured list and promoted Ben Braymer, another lefty starter, in his place. Whenever Braymer pitches, he’ll become the sixth player to debut for Washington this summer.

“I’m looking for the end,” Martinez said. “When they tell me everybody is healthy, everybody is good, let’s go, you know? I guess it’s part of the game.”

Only minutes earlier, Martinez deflected a question on his untouched option for 2021, saying he’s too worried about injuries, surgeries, safety during the novel coronavirus pandemic and the Nationals’ next game to even think about his contract. That was probably a small fib. It would be human for him to consider what’s beyond this year. But calling him occupied would be an understatement.

He has integrated protocols and prospects and is trying to steer a team past its uneven start. Then it began this week with another step back.

After his previous start, a clunker in Atlanta, Voth tried to fix his mechanics in five days. That would prove to be too tall a task. The 28-year-old was sharp in the first inning, retiring the Marlins in order. He was sharp again in the second, using an around-the-horn double play to face the minimum. But he stumbled in the third before he slipped an inning later.

“I just need to hone in on my mechanics still,” Voth said. “I’m still tweaking them and figuring them out, to get comfortable with something that sticks and I’m used to.”

The unraveling was swift and painful. Voth seemed fine, even in control, with one on and one down. Then the rally heated up when he hit Jorge Alfaro with a first-pitch fastball. Then it took off with Jonathan Villar’s single, Miguel Rojas’s walk and a single from Matt Joyce that scored two and ended Voth’s night. He left runners on the corners for reliever Javy Guerra, and they scored when Jesús Aguilar punched a double off the wall in center.

That capped Voth’s line at six hits, six earned runs, three walks and three strikeouts. He threw 73 pitches. Guerra allowed another run before Dakota Bacus yielded four across the seventh and eighth. That helped hollow out a steady push, built on a three-run fifth, Soto’s bat and Eaton’s blast in the eighth that accounted for the final margin.

Voth’s starts have often hit a wall in the fourth inning, when he’s facing a lineup for the second time. In his first turn through the Marlins on Monday, he permitted two base-runners on a pair of singles. But in the next trip through, eight batters reached and the scoreboard tilted. Voth has only twice made it to the fifth inning this year.

“The bullpen, we can’t keep doing this every night,” Martinez said, nodding to Voth leaving the relievers with another heavy workload. “We got to start getting quick outs and going deeper in games.”

“I’m extremely frustrated,” Voth admitted. “I know I’m capable of more. I know there’s more in the tank. It’s just I get these at-bats where I’m throwing eight, nine pitches for one batter and then they get a base hit and then I’m fighting again.”

In July 2019, the Nationals watched Joe Ross and Erick Fedde get pummeled in the week before the trade deadline. They sought a depth starter. They agreed to acquire one before the deal fell through. Then, both Fedde and Ross were starting because Max Scherzer was in the midst of missing six weeks with back issues. Now, without Ross and with Strasburg out until 2021, Fedde and Voth are rounding out a rotation that has yet to meet expectations.

That’s most apparent with Voth, who had won the fifth starter’s spot coming out of summer camp. In the weeks since, the Nationals are 1-4 when he takes the mound. In the one win, they scored eight runs and needed seven relievers.

In a news conference Sunday, General Manager Mike Rizzo repeatedly vowed to be aggressive at the trade deadline, saying he and ownership remain committed to winning back-to-back titles.

As is, the rotation is without Strasburg and is depending on Voth and Fedde to make two of every five starts. That could run counter to the team’s ultimate goal.