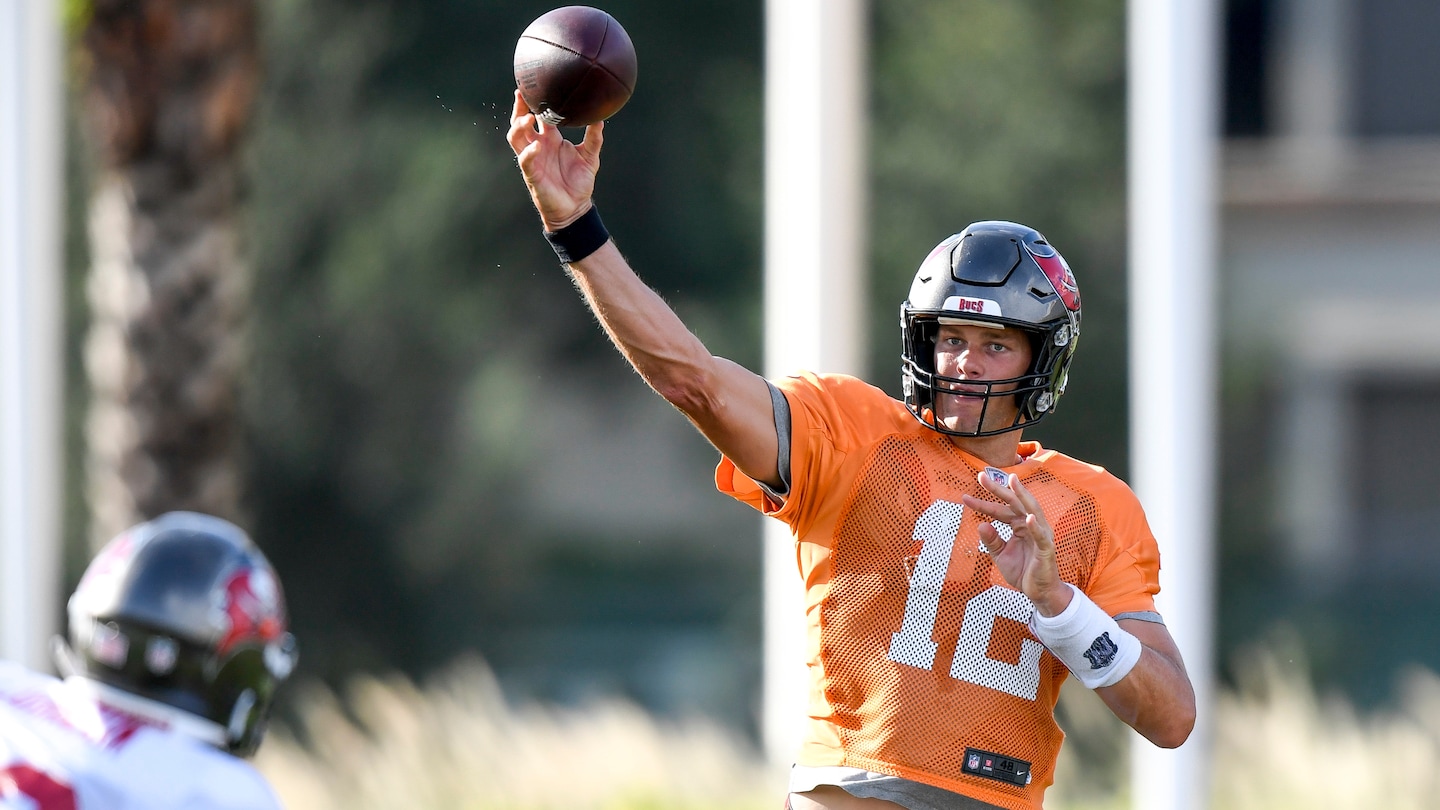 The focus has been on whether there will be a season and, if so, what it might look like. There has been little time to ponder the on-field story lines — the actual football amid the tests, distancing, mask-wearing and contact tracing. So now that teams have begun full-speed practices in preparation for a season set to begin Sept. 10, here is a look at 10 on-field issues worth tracking between now and Week 1:

Brady, Gronk and the Bucs

When Tom Brady decided in March to leave the New England Patriots and sign with the Tampa Bay Buccaneers, the effects of the pandemic were just beginning to be seen and comprehended. There was no way for the six-time Super Bowl-winning quarterback to know that his transition period to his new team would include no official on-field practices during the offseason.

Brady has been joined in Tampa by former Patriots tight end Rob Gronkowski. Yet he acknowledged during a video conference call with reporters in early August, “We’ve got a lot of work to do in a very short amount of time.” There is plenty of talent around Brady. The setup is promising — if he and Coach Bruce Arians can pull things together quickly under these demanding circumstances. All eyes will be on Brady when the Buccaneers open the season Sept. 13 in New Orleans.

Can Brady win without Coach Bill Belichick? Can Belichick win without Brady? The debate about whether the Patriots’ dominance was more about Brady or more about Belichick is pointless. They were historically successful together, and whatever happens after their parting doesn’t change that. Still, the comparisons undoubtedly will be made.

The task is daunting for Belichick. At quarterback, he must choose between Cam Newton, the former league MVP signed to a modest contract following his release by the Carolina Panthers, and second-year pro Jarrett Stidham, with Brian Hoyer also in the mix. Newton is new to the offense, but Stidham reportedly is dealing with a hip injury. Meanwhile, Belichick must deal with a roster weakened by offseason departures and player opt-outs.

But he’s Bill Belichick. Don’t make the mistake of counting him out.

The league and the NFL Players Association crafted an altered structure for training camps, featuring a gradual increase in activities, to account for the lack of on-field work by players during the offseason. The NFL agreed to eliminate the preseason entirely, as the NFLPA had sought. The number and severity of injuries suffered during training camps will be followed closely by the league and the union. The elimination of preseason games reduces the likelihood of unheralded rookies making season-opening rosters. There also will be scrutiny of the quality of play early on.

These aren’t the best circumstances for a prized rookie quarterback: The learning curve is steeper than ever. That will make things even tougher for Joe Burrow, the top selection in the draft, as he tries to turn around the Cincinnati Bengals, presumably as a starter from the beginning of his rookie season.

The Miami Dolphins can take a more patient approach with Tua Tagovailoa, who was chosen fifth as he returned from a hip injury that cut short his final season as Alabama, because Ryan Fitzpatrick can be a place-holding, temporary starter. Rookie-year expectations for Burrow and Tagovailoa should be adjusted accordingly.

The all-remote offseason, altered training camp schedule and elimination of the preseason work against Ron Rivera in Washington, Mike McCarthy in Dallas, Matt Rhule in Carolina, Kevin Stefanski in Cleveland and Joe Judge with the New York Giants. The NFL’s new head coaches have had little time to get their programs in place and fewer opportunities to interact in person with players unfamiliar to them. It’s never easy to win in Year 1. It will be even tougher this season.

Is the Cowboys’ window closing?

The Cowboys’ failure to sign quarterback Dak Prescott to a long-term contract extension puts them in jeopardy of being in the same situation Washington was in before parting with Kirk Cousins. Prescott can be retained with the franchise tag, but at some point that approach becomes too expensive and too unwieldy under the salary cap. If the Cowboys are going to break through and reach the Super Bowl with Prescott, they might have to hurry up and get it done soon, new coach or not.

The Green Bay Packers drafted Aaron Rodgers’s eventual replacement at quarterback, Jordan Love, rather than using their first-round pick to bolster the roster around him in a bid to reach another Super Bowl. This issue isn’t going away. This feels like the beginning of the end for Rodgers in Green Bay, much like it was the beginning of the end for Brett Favre with the Packers when they drafted Rodgers in 2005. What remains to be seen is how long it takes for that to play out — and how Rodgers and the Packers fare during this awkward transitional time.

Philip Rivers made far too many mistakes in a 20-interception final season with the Los Angeles Chargers, and his move to Indianapolis was overshadowed by Brady’s relocation to Tampa Bay. Rivers, 38, faces the same challenges Brady does, but he won’t have to endure the same level of scrutiny. He lands with a team that has an excellent coach in Frank Reich and an offensive line capable of being among the NFL’s best. This could be a move that works out well for both Rivers and the Colts, who are attempting to return to contender status after a disappointing 2019.

The Chicago Bears are calling it a quarterback competition. But they wouldn’t have brought in an accomplished veteran such as Nick Foles if they were optimistic about how things were going with Mitchell Trubisky. Even if Trubisky opens the season as the starter, expect Foles to get a chance at some point relatively early.

There is off-field chaos and controversy for the Washington Football Team. Rivera must try to turn things around under unkind circumstances. He plans to continue coaching even after revealing Thursday that he had been diagnosed with squamous cell carcinoma, a cancer that the team said was in an early stage and located in a lymph node.

But the team does have one feel-good story: the return of quarterback Alex Smith from the life-threatening complications of what seemed to be a career-ending leg injury suffered in November 2018. If Smith plays another NFL game, it will be among football’s greatest comebacks. Even if he doesn’t, he has come much closer than most people expected. He is a veteran as respected as they come, having been credited with aiding Patrick Mahomes’s rapid development to NFL greatness in Kansas City.

It’s not clear how he fits in the quarterback mix alongside Dwayne Haskins and Kyle Allen. But whatever happens from here, Smith has done remarkable and inspirational things just to get to this point.

More on the NFL: