Fantasy football appears to be losing out to 2020’s cold, hard reality 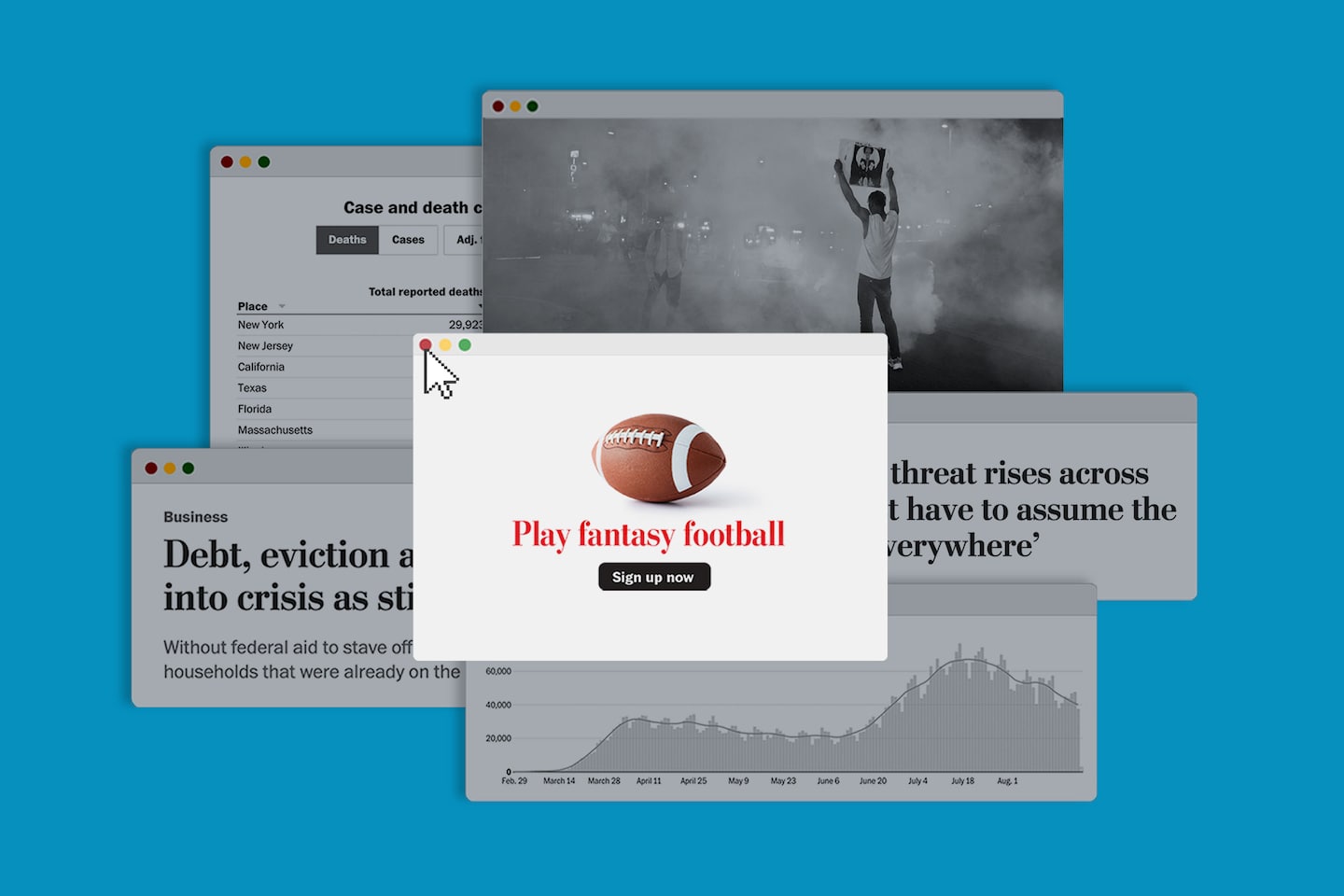 “But this year, I just haven’t done anything,” Clapp said. “For whatever reason, the enthusiasm I’ve had in previous years for fantasy is still not there.”

The NFL regular season is less than three weeks away, which means it should be prime time to prepare for fantasy football, a satellite obsession for millions of fans. Last year, for example, ESPN said more than 1.6 million teams were drafted on its website alone during its two-day “Fantasy Football Marathon,” after almost 2 million during the same event in 2018. But interest in fantasy football in 2020, like so many sporting diversions, has been disrupted.

Mike Hall, president of MyFantasyLeague.com, estimated in a phone interview this month that his site’s revenue was “down, probably about 25 percent right now.” According to Google Trends, the volume of searches for the term “fantasy football” was roughly one-third what it had been in an equivalent time period in each of the previous four years.

Clapp, 32, a copy writer and resident of the Boston area — as well as the commissioner of a fantasy football league for the past 17 years — was able to point to at least one major reason for his sudden loss of interest: the novel coronavirus pandemic.

“It makes no sense to invest all this money, and get my hopes up and strategize and put in the time to do these drafts, when we don’t know if the season’s going to happen,” he said recently in a phone interview. “If it starts, will it stop? Will it be prematurely shortened because of covid-19?”

Concerns about the NFL’s ability to stage a full season amid the pandemic, with an on-time starting date of Sept. 10, have likely had major impacts on participation, several figures within the fantasy industry noted. Other developments gripping the country, including an economic recession, a presidential election and months of protests over racial inequity, also have made fantasy football feel far less compelling.

“It’s ugly,” Joe Dyken, who runs the website Fantasy Football Nerd, told The Washington Post via email earlier this month. “We are down 60% from where we were at this time last year.

“I’ve heard from many of our members, and it’s a combination of a few factors. COVID is the biggest issue. Some of our members have lost their jobs and their discretionary income is simply not there. Some are concerned that there won’t be a season, so they’re holding off until they feel confident that the NFL will indeed kick off. We even have some members who have voiced their frustration about players kneeling, and they are refusing to watch the NFL.

“Throw an election into the mix,” Dyken continued, “and like I said, it’s ugly.”

“I think the biggest factor is that the rhythms of news have been so interrupted,” Patrick Daugherty of the fantasy news site Rotoworld said in an email last week. When the sports world shut down in mid-March in an effort to slow the spread of the virus, the NFL was forced to scrap typical offseason activities such as minicamps — and consequently, the tantalizing media reports that often emerged from them. In their place was an offseason conducted largely out of sight and, for many football fans, out of mind.

“The ‘no offseason’ is usually not a cliche,” Daugherty said of the typical NFL calendar. “It’s a fine-tuned machine choreographed to make sure NFL fans are getting news basically every week of the offseason, save for late June-late July. We just didn’t have that this year.”

Referring to the fact that the pandemic radically altered the schedules for other sports leagues, Daugherty added: “I think a lot of sports fans — like myself — kind of base their internal calendar off of sports, and this year all the signifiers are out of whack.

“At a time where you should be getting hyped about a third-round rookie’s long practice touchdowns, instead we are getting playoff hockey tweets at noon on a Wednesday. We are missing those subtle nudges that say, ‘Hey, it’s time to start your fantasy preparation.’”

Two officials with league-hosting sites pointed to coronavirus-related opt-outs by NFL players as having an unnerving effect on their customers. Scott Fish, a longtime figure in the fantasy industry, cited the July 29 announcement by Damien Williams, the starting running back of the Super Bowl champion Chiefs, to sit out the season as one that “sent shock waves” through the fantasy community.

“Everything was busy/normal earlier in the summer, but during that week or two of major uncertainty, league activity died,” Fish said via email of SafeLeagues, the commissioner-service site he runs.

Hall also said his site’s numbers were “very steady until about mid-July.” [The author is a paying customer of MyFantasyLeague.com and also participates in an experts’ league on FantasyFootballNerd.com.]

Officials with ESPN and CBS Sports, two of the biggest players in the fantasy league-hosting field, declined to comment on how 2020 sign-ups at their companies compared to previous years. But Chris Towers, a fantasy analyst for CBS Sports, said in a tweet this month that a check of Google Trends “confirms my suspicion that interest in Fantasy football is way down relative to this time last year, even accounting for the later season start.”

Dave Richard, another fantasy analyst for CBS Sports, offered anecdotal evidence. “The first time I noticed that Fantasy Football managers might be losing interest this year was when my friend Lennie, who I’ve annually played Fantasy Football with since we went to college in the late 90s, said he didn’t want to play,” Richard wrote in an email. “More friends in my longest-running league followed suit.

“We agreed on an altered format for this year to keep everyone together, but that’s how I knew people would have a harder time getting excited to play Fantasy Football.”

Clapp said the draft for the league he runs is “hanging on a by a thread, we don’t know if we’re going to have it.”

Hoping for a rally

It likely hasn’t helped that MLB postponed its Opening Day, originally set for March 26, to July 23. As some have pointed out, that captured the attention of the many who play both fantasy football and baseball, and subsequent, schedule-scrambling coronavirus outbreaks among MLB teams could have instilled dread in those fearing the same problems when the NFL kicks off.

However, MLB is forging ahead, and the success of the “bubbles” set up by the NBA and the NHL could provide additional reason for a sunnier outlook for the NFL’s 2020 campaign.

“Currently with so much uncertainty in the sports world most fans have a ‘see it to believe it’ mentality,” Brad Evans, an analyst for FTNFantasy.com and SXM Fantasy Sports Radio, said in an email. “Once people turned on their TVs, shook off the disbelief and viewed real-life [baseball and basketball] action unfolding again on their screens, traffic and subscriptions across our sites spiked. Fantasy football is following an identical path.”

“Now with less than a month to Texans-Chiefs [which starts the NFL season] and COVID positivity rates reportedly under 1 percent across the league,” Evans added, “I fully expect sign-ups to rocket in short order.”

After seeing an alarming drop at his website earlier this month, Dyken reported last week that with training camps generating news, and with the prospect of an NFL season looking more realistic, “traffic and subscriptions are thankfully on a healthy rise!”

Fish, though, noted that he still gets “daily emails with people concerned.” He added, “I would say the overall feel is that of hesitancy paired with there just being more important things going on in the world.”

Instead of trying to figure out which NFL players’ stocks are on the rise, Clapp has taken up investing, which he likened to fantasy football as a form of “legalized gambling, in a way.” He said he has also enjoyed “really reconnecting with friends and family during the work-from-home period, and just kind of trying to be present with people in my life, versus cramming all this time and energy into fantasy sports.”

That’s not to say that he isn’t looking forward at all to football, it just may be more the real-life kind than the virtual version.

“Once there is some certainty as we approach Week 1, that first Thursday night game, and it’s looking more and more like it’s gonna happen, I could see myself definitely being a little more interested than I am now,” he said. “But when something is so uncertain — and you’re really having a hard time seeing it come to fruition — it’s just hard to have that same level of enthusiasm and passion.”