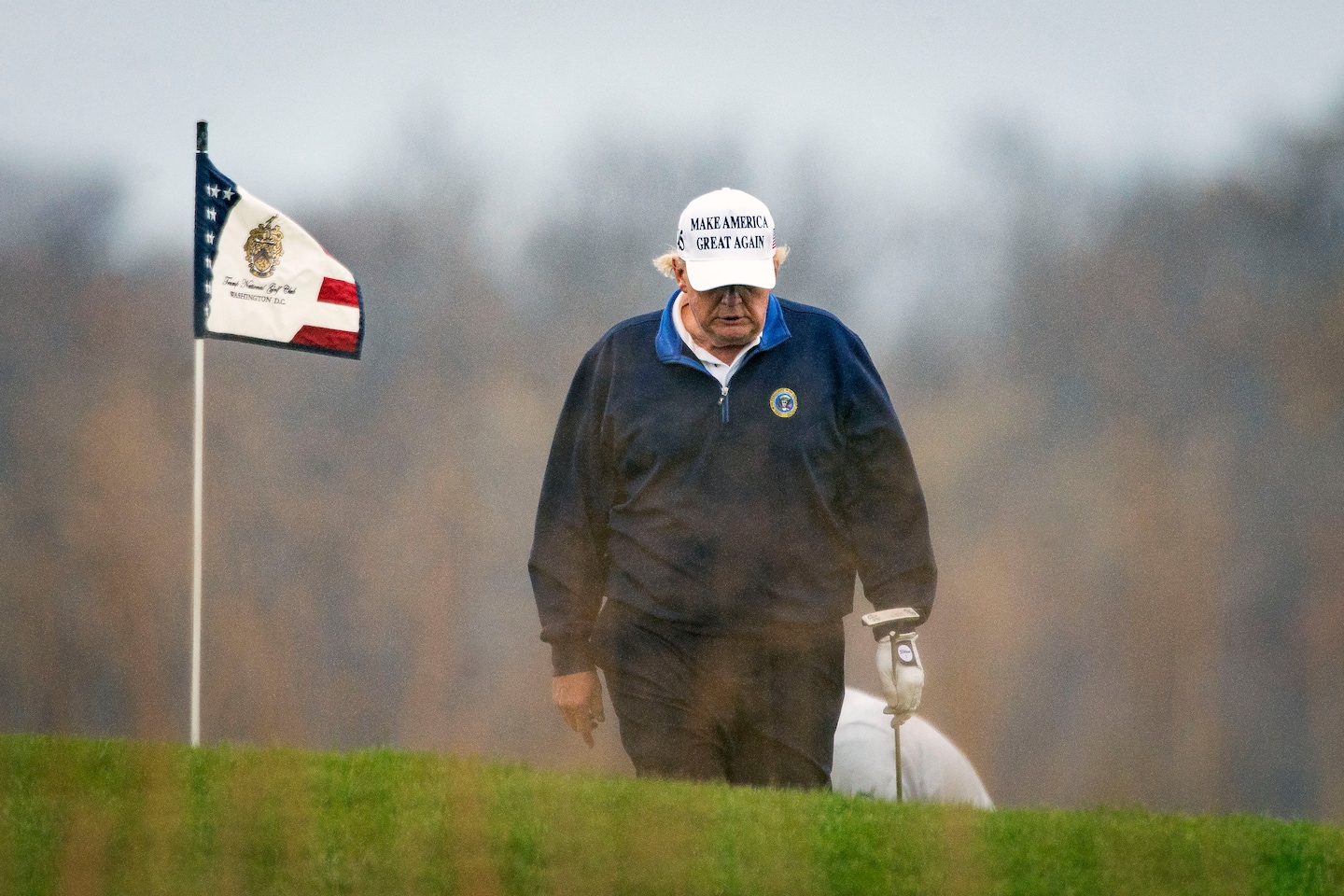 This year, the American president is a reluctant attendee. After days of noncommittal silence, the White House finally confirmed late Friday afternoon — less than 24 hours before the global summit’s scheduled start — that President Trump would participate.

It’s just the latest reminder that during this once-in-a-century health and economic emergency, world leaders have struggled to develop a common response. Trump initially wanted to hold this year’s annual Group of Seven summit at Trump National Doral, his Miami-area hotel and golf club, then backtracked amid criticism and rescheduled it for the presidential retreat at Camp David before eventually canceling altogether. Trump also skipped a pair of summits with Asian leaders that were held last weekend via videoconference.

The G-20 now moves into the spotlight with expectations remarkably low, given the stakes. On Saturday and Sunday, the G-20′s annual conclave is expected to finalize a framework for granting poor nations debt relief and little else.

“I don’t imagine there will be a huge amount of progress made,” said Douglas Rediker, chairman of International Capital Strategies, a financial advisory firm.

With signs that the global economic recovery is stalling, some influential voices are calling for intensified cross-border collaboration.

The head of the International Monetary Fund, Kristalina Georgieva, warned the G-20 that uncoordinated crisis spending would cost two-thirds more than a joint approach. And she urged its members to prepare an ambitious roster of synchronized infrastructure investments to help complete the recovery, once the pandemic is tamed.

Business leaders and prominent Democrats, meanwhile, want President-elect Joe Biden to call together world leaders early in his administration to craft a joint response to the pandemic’s intertwined health and economic dangers. Failure to coordinate global distribution of a coronavirus vaccine, some say, could hobble any global rebound as richer nations power ahead of poorer ones.

“A sustainable economic recovery cannot be achieved anywhere unless we defeat the pandemic everywhere,” Georgieva wrote Thursday on the IMF blog, adding: “We can build the impetus for growth, jobs, and address climate change, far more effectively if we work together.”

The G-20 was launched in 1999 to bring together finance and central bank officials from traditional and emerging powers. But in late 2008, as the global economy unraveled, Bush called an emergency leaders summit.

The first-time forum quickly emerged as the crisis management cockpit for presidents and prime ministers. After the second summit in April 2009, Obama gushed that the leaders had achieved “a level of tangible, global economic cooperation that we’ve never seen before.”

Today, that heads-of-state harmony is just a memory. And Trump’s well-known distaste for multilateral negotiations is only part of the reason. Even before Trump took office, the G-20 in recent years had earned a reputation as an ineffectual talking shop, rather than an organization that wielded genuine heft.

The souring between the United States and China, the world’s two largest economies, has further complicated global cooperation, while the pandemic has prevented the personal contact that symbolized the leaders’ activism in the last crisis.

“The G-20 lost its way years ago. But it’s definitely been worse in the Trump era,” said Matthew Goodman, of the Center for Strategic and International Studies, who helped coordinate Obama’s summit appearances. “There’s no sense now of the common purpose that was there in 2008-2009.”

Indeed, Trump — whose official schedule has been almost empty since he lost the Nov. 3 election — skipped two virtual summits of Asian leaders last weekend. (Early Friday morning, he made a brief video appearance at another Asia-Pacific gathering.)

The group’s eclipse could end once Biden is inaugurated in January. Already, prominent Democrats such as former treasury secretary Larry Summers have called for the president-elect to convene an early G-20 leaders summit.

Biden, who promised during the presidential campaign to “rally the world” to combat shared challenges, is likely to do so, several analysts said.

“I would expect that to happen,” said Tim Adams, president of the Institute of International Finance, an industry group. “This is the first time in the modern era we did not have a strong visible coordinating heads-of-state response.”

A spokesman for the Biden transition did not respond to a request for comment.

Elements of the business community are eager for the United States to reengage with a host of international bodies, such as the World Trade Organization, and would welcome a more active crisis-fighting stance.

“There’s an important role for the U.S. in leading the world on a coordinated economic response, as the U.S. did in 2008-09. All indications are that President-elect Biden and his team understand that well,” said Joshua Bolten, president of the Business Roundtable, which represents the CEOs of the nation’s biggest companies.

Talk of a stepped-up U.S. effort comes as the outlook for the global economy remains troubled. The IMF said last month that it expects global output to shrink by 4.4 percent this year and make only “a partial and uneven recovery next year.”

In a matter of months, the pandemic could drive as many as 150 million people into extreme poverty, reversing two decades of steady progress in alleviating the suffering of the world’s poorest people, according to the World Bank.

While global coordination has lagged, individual countries this year have spent freely to compensate for the damage the pandemic has caused. The United States moved within weeks of the shutdown in March of nonessential businesses to approve approximately $3 trillion in aid for individuals and businesses.

European nations, both separately and through their shared union, have spent a comparable sum. The Japanese government plans more spending on top of the more than $2 trillion it already has committed.

Officials from the Treasury Department and Federal Reserve this year also have worked in tandem with their counterparts in Europe, Japan and elsewhere to ensure that financial markets work smoothly. In March, the Fed reprised a tool it had used to great effect in 2008, agreeing to provide central banks in countries such as Australia, Brazil and Mexico with as much as $60 billion in dollars apiece in return for foreign currency.

“Finance and central bank officials, including from the United States, have done a great job trying to mitigate the economic fallout from the pandemic and ensuring that the financial system moderated rather than amplified shocks,” said Daniel Price, managing director of Rock Creek Global Advisors.

What has been missing is consistent coordination by heads of state. The $11.5 trillion that G-20 nations have allocated — even more than during the 2008-09 crisis — is not part of a single road map. As individual governments have charted their own course, the resulting imbalances threaten to inflame political sensitivities. A sharp increase in U.S. government spending fueled an economic rebound that sucked in imported goods, while some U.S. trading partners spent less. Every month since April, the United States has incurred a larger trade deficit than in the same month in 2019.

The United States this year blocked the creation of $1 trillion in new crisis financing capacity for the IMF, fearing that some of the money would flow to countries such as China or Iran. And a World Bank initiative to suspend debt service payments for the poorest countries initially failed to include China or private-sector lenders. So far, the Debt Service Suspension Initiative has saved 43 poor nations $5 billion, which Summers has derided as using a “squirt gun” to extinguish a raging fire.

“The G-20 unfortunately has been much more of a bystander in this crisis,” said Lipsky, a former IMF official. “This is it for the G-20. If it’s not going to act now, what’s the point?”

This weekend’s summit is expected to approve a new framework for debt relief, which would for the first time include both China and the world’s banks.

But, as was the case 12 years ago, the summit will occur as leaders anticipate the arrival of a new U.S. president.

The departure of Trump — the most protectionist U.S. president since the 1930s — could facilitate intensified cooperation, including a renewed G-20 pledge to avoid new trade barriers.

But there will remain points of friction. Biden’s plan to limit government contracts to goods “Made in the U.S.A.,” for example, already has sparked objections from U.S. trading partners.

“There is some tension between domestic industrial policies and working cooperatively with allies,” said Kelly Ann Shaw, a former Trump White House official who is now a partner at Hogan Lovells. “But we are facing so many challenges, international coordination is going to be key.”

When a business owner dies without a succession plan, everyone is thrown into turmoil