Give in to pandemic cravings, starting with a homemade cheesesteak sandwich 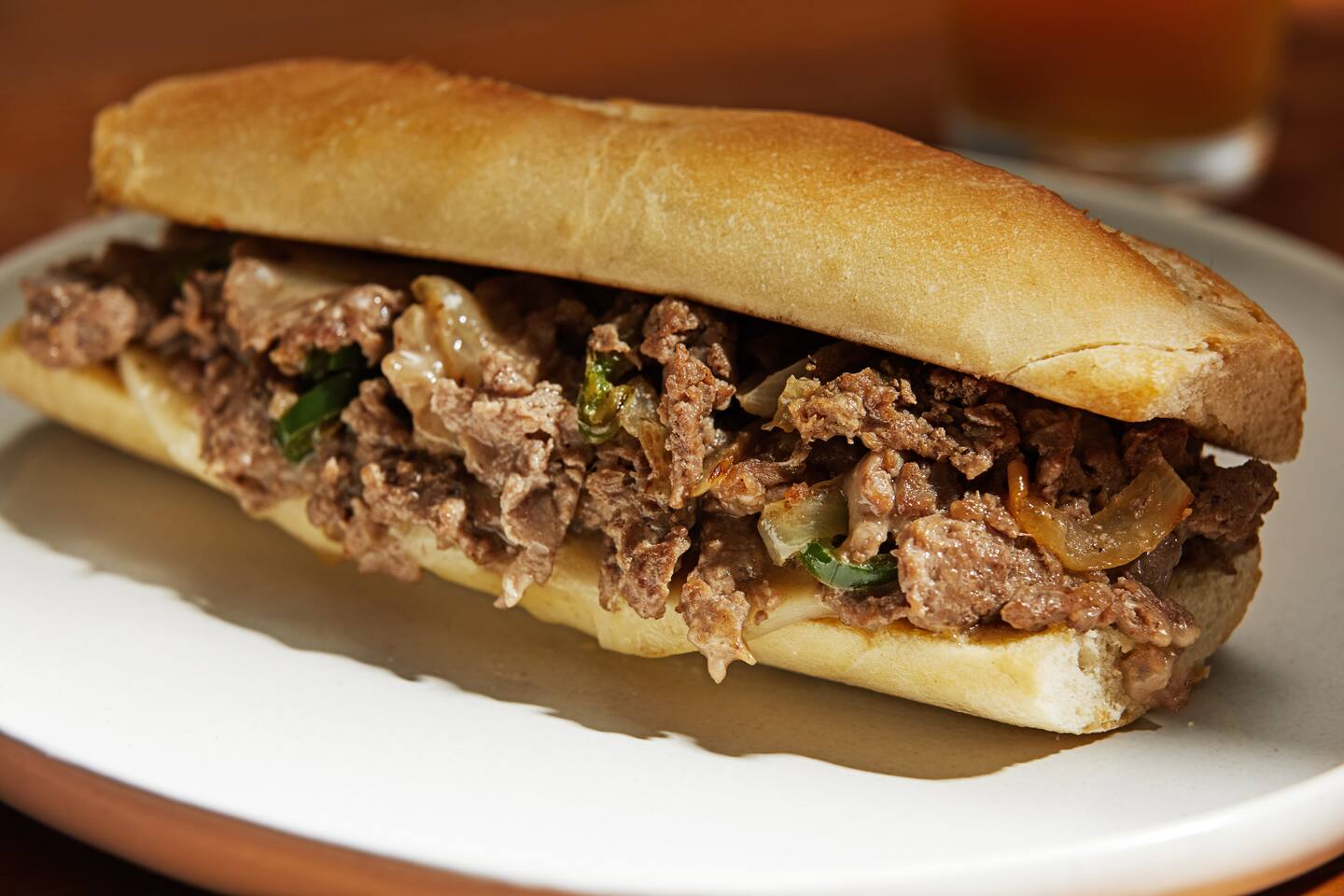 As many of us did, I channeled my covid anxiety into cooking and eating, using the pandemic as a pretext — okay, an excuse — to abandon dietary discipline temporarily, especially in the carb department. What I craved the most were savory comfort foods, especially ones I never made at home because I considered them verboten, such as an overstuffed Italian sub with its fringe of shredded iceberg, hot dogs with snappy skins and cheesesteaks packed with meat and gooey cheese.

People have strong feelings about cheesesteaks.

Philadelphians, who lay claim to the sandwich, barely let you utter the word unless you have the birthright and disdain people who use the implicit — and therefore silent — adjective Philly before cheesesteak. The basic requirements: a crusty hoagie roll, preferably from Sarcone’s Bakery; shaved rib-eye steak, griddled; and cheese, your choices being provolone, American or Cheez Whiz only. It may also come “wit” or “witout” sauteed onions, provided you leave the word onions out of your order.

My benchmark cheesesteak was at Trio Pizza on Q Street in Dupont Circle in D.C., which closed in 2005 to make way for Hank’s Oyster Bar. In the early 1980s, I lived a few doors east of it, and it was a dependable, late-night satisfaction after hitting the bars — it was open until 3 a.m.

Scale and get a printer-friendly version of this cheesesteak recipe here.

The cheesesteaks there were so popular (especially with police officers, who know where the best sandwiches are) that the automatic slicer constantly moved to and fro, shaving off thin slices from an enormous, bright red hunk of boneless rib-eye, the de rigueur cut of meat because of its superior flavor and marbling.

On the griddle were sub rolls splayed open and toasting and multiple piles of meat sizzling in various degrees of doneness, the cook using a metal spatula to break up the meat — but mercifully not chopping it into smithereens — before adding cheese and, if requested, onions and peppers. Each pile got a final squirt of Worcestershire sauce. My standing order: double meat, double provolone and no sauce, because it made the sandwich, stuffed in its Styrofoam coffin, soggy in an awful, watery way, not in a lovely, greasy way.

In the early pandemic days, takeout, even for cheesesteaks, wasn’t an option. I wasn’t convinced it was safe for restaurant staff and my husband, also high-risk, and me. (As we learned more about the coronavirus, and restaurants instituted safety measures, my worry abated. Risk of getting the virus from eating or handling food, or from its packaging, is low, according to the Centers for Disease Control and Prevention.) So putting my skills as a former chef to use, I set out to satisfy my cravings at home.

First I had to source the ingredients, and that presented problems.

The pandemic caught me unprepared. As a food writer and restaurant critic, I ate in restaurants often. When I cooked, I shopped for fresh ingredients, going to one store for the best this, another for the best that, priding myself on the low inventory of my refrigerator, freezer and pantry. Early attempts to have groceries delivered or to order them online and pick them up failed — there were no slots available. Now I had to be a once-a-month, one-stop shopper to lower the possibility of viral exposure.

As I made my way stealthily through Giant Food on my first pandemic stock-up, Mick Jagger’s refrain, you can’t always get what you want, looped in my brain.

Because of a beef shortage, there was no rib-eye available, and I wasn’t willing to compromise. The bread aisle was a wasteland of mediocrity offering pale, spongy, factory-made sub rolls, but no crusty bakery-style ones. I bought a bag of generic sub rolls at the deli counter while stocking up on four pounds of Boar’s Head picante provolone cheese, whose sharpness provides flavor and umami that vapid mild provolone does not. I vacuum-sealed the cheese in half-pound batches and froze the rolls and put the cheesesteak craving on a back burner.

In July, while at a Washington butcher for something else, I found frozen shaved rib-eye and revived my cheesesteak-making quest. My first efforts were on the right track, but the meat had a funky aftertaste. Much better in flavor and quality were the fresh Whole Foods boneless rib roast ($14.99 per pound) that I trimmed, froze and shaved on my Waring Pro home slicer, and the shaved, trimmed, rib-eye ($24.99 per pound) that I bought from the Organic Butcher in McLean, Va.

A grocery store sub roll is fine, but I happened upon something I like better. (Philadelphians, prepare to take to Twitter and the comment section, indignant.) I had done a curbside pickup from Bread Furst bakery in Northwest D.C. and had a French baguette on hand. I buttered and toasted an eight-inch section in a stainless-steel skillet over high heat (it mimics a griddle) and set it aside.

Into the pan went thinly sliced onions and jalapeños with rib-eye slices, seasoned liberally with Diamond Crystal kosher salt and freshly ground black pepper, draped over them. (I like the peppers’ subtle kick of heat — my sandwich, my choice.) As the meat cooked, the vegetables steamed and caramelized slightly underneath. Using a metal spatula, I combined the steak and vegetables and then melted an embarrassing six slices of picante provolone into them before stuffing the lot into the roll.

The result was sublime simplicity. To me, the baguette — even a grocery store one, is better than a bad grocery store hoagie roll because it absorbs the cheesesteak’s juices without falling apart.

Abundant salt and pepper are all you need to let the meat and cheese shine.

The cost of my homemade cheesesteak, about $15, compares to that of the various restaurant and ghost kitchen options now available across Washington, before tax, tip and delivery charges.

Sadly, though, I fell victim to the food writer’s paradox. Having made and sampled more than a score of cheesesteaks to perfect the recipe, I’ve grown weary of them. Now that I can always get what I want, it no longer gives me what I need.

Pro tip: Separate and lay out the rib-eye slices on film wrap before you start cooking to avoid peeling them apart at the last minute.

In a small ramekin or bowl, combine the salt and pepper. Halve the baguettes lengthwise but not all the way through. Spread 1 teaspoon of butter evenly over each interior side.

Heat a 12-inch stainless-steel or cast-iron skillet (not nonstick) over high heat for 2 minutes. Working in two batches, open the rolls and toast them, buttered sides down, until golden, 60 to 90 seconds. (Press down on the rolls with a metal spatula if need be, so the entire surface gets toasted.) Lightly toast the other side for about 30 seconds. Transfer each roll open-faced to a plate; leave the skillet over the heat.

Add the onions to the skillet in two piles and top with the jalapeño slices. Drape half the meat over each pile and season with the salt and pepper mixture. Allow the steam from the onions to cook the meat until nearly well done, using the end of a metal spatula to spread the piles out wider, about 2 to 3 minutes. Then use the spatula to flip each pile and cook any remaining pink out of the meat, about 1 to 2 minutes. (If you like the steak chopped up, use the spatula to do that here.)

Drape half the cheese over each pile and let it melt entirely, 1 to 2 minutes, using the spatula to combine the meat, cheese, onions and jalapeño and aid the melting. Using the spatula, spread cheesesteak filling evenly over the rolls. As you close each sandwich, use the end of the spatula to stuff the meat into it so that it doesn’t spill out.

Cut the cheesesteaks in half with a serrated knife and serve.