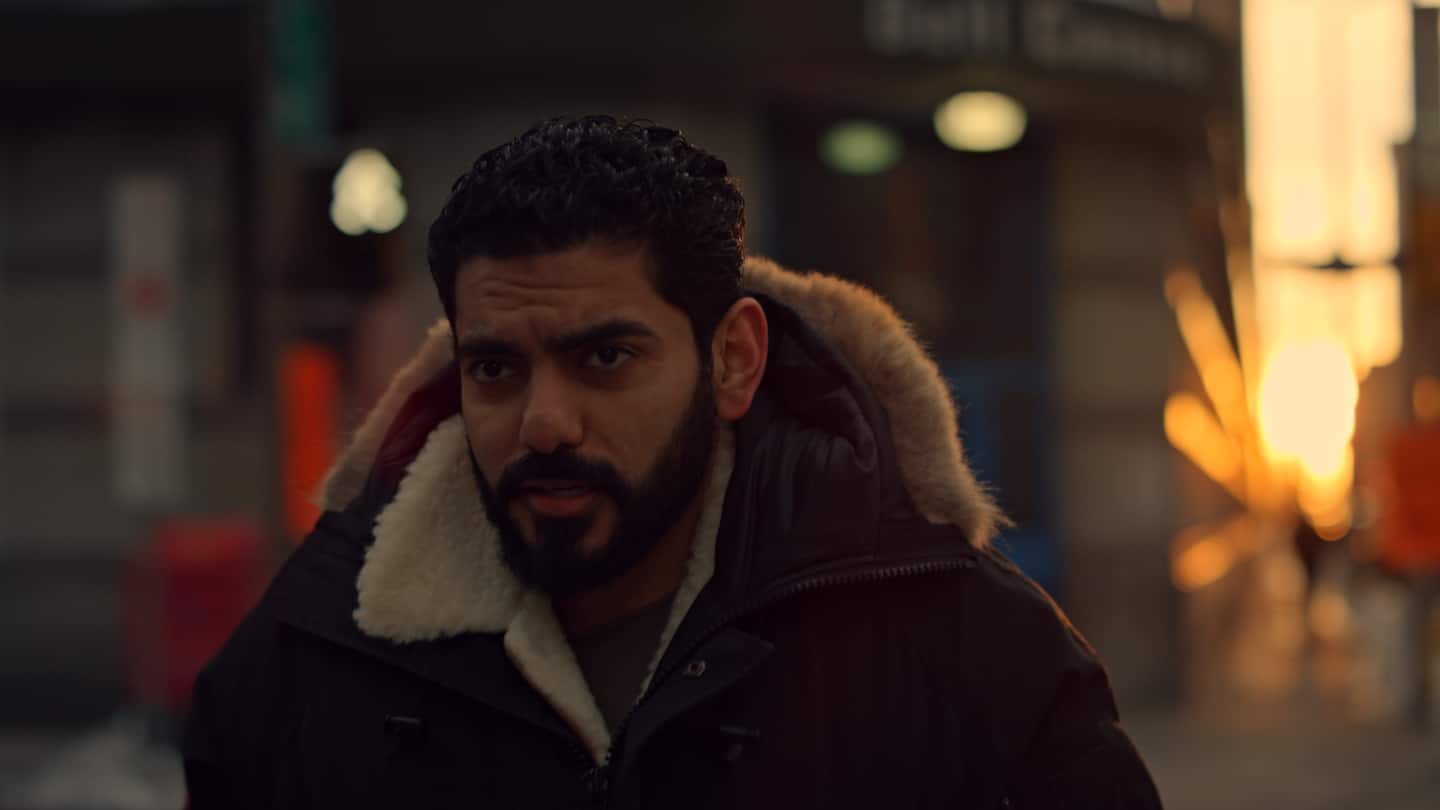 A close friend and partner-in-activism of the late Washington Post columnist Jamal Khashoggi, Abdulaziz has been continuing Khashoggi’s reformist mission, issuing critical social media posts even as the Saudi authorities have threatened him and thrown his brothers in jail. Now the activist’s story, little known in the United States, could become more widely publicized with the release of “The Dissident,” a documentary that tells his and Khashoggi’s story.

The film was released on video-on-demand over the weekend by Briarcliff Entertainment, an independent distributor, after big Silicon Valley streamers Netflix, Amazon and Apple, as The Post reported, passed on the film, possibly not to offend the Saudi government.

Briarcliff has released the movie in 175 theaters and on many digital rental platforms, including iTunes on Apple TV and Amazon Prime Video, which collectively reach more than 150 million U.S. homes. The movie won’t, however, get the same marketing push had a streamer acquired it outright and also will require customers to pay separately, potentially reducing its audience. (Amazon chief executive Jeff Bezos, who is featured in the film as an alleged hacking victim of the Saudi government, owns The Post.)

Briarcliff, run by film veteran Tom Ortenberg, conducts little business in the Middle East. Ortenberg says the company has received no threats to date. The firm’s financial exposure is also limited: It spent less than $500,000 for rights, according to a person familiar with the negotiations who was granted anonymity because he was not authorized to speak about them, far lower than the $5 million to 10 million a streamer can pay for a documentary.

Shadi Hamid, a senior fellow at the Brookings Institution, said that any targeting of a distributor would probably come in the form of business restrictions in the kingdom. Abdulaziz should be more concerned, he said: The activist’s family could be subject to further retribution.

Directed by Bryan Fogel, who made the Oscar-winning Russian doping documentary “Icarus,” “The Dissident” turned Khashoggi’s killing at Istanbul’s Saudi Consulate — an act the CIA thinks was ordered by Saudi Crown Prince Mohammed bin Salman — into a cinematic event at last year’s Sundance Film Festival. The movie, which is funded by the Human Rights Foundation, earned such fans as Hillary Clinton, while critics raved about its style and import.

But the late journalist is only a piece of the narrative. “The Dissident” also tells of a less-expected figure — Abdulaziz, who not only is seeking to continue the columnist’s work but provides a kind of alternate history, reminding what Khashoggi might have kept doing had he not been killed.

In an interview over a secure video link, Abdulaziz described his current life.

“I have six phones on my desk because my phone was hacked [by the Saudi government] in 2018,” he said. “I can go to a restaurant or movie theater, but I can never tell anyone where I’ll be.” In his mind, he says, play constant images of Khashoggi, who evidence indicates was slowly asphyxiated by a team of agents and dismembered with a bone saw.

Abdulaziz was speaking from an unidentified location in Montreal. Even on Canadian soil, he has watched as dangers lurk around every corner. He has been forced to resist numerous attempts to lure him back to his homeland, where he thinks he will be arrested and tortured, even fending off prominent Saudi figures who have come to retrieve him.

His friends and two of his brothers have been jailed in his home country to apply pressure on him to return.

Yet he is continuing Khashoggi’s work under the constant threat of death, tweeting to more than half a million followers (Twitter is the rare source of independent information in the kingdom) and posting videos on YouTube that garnered more than 30 million views last year. Abdulaziz is part of a small but influential group of Saudi dissidents that also includes such figures as Loujain al-Hathloul, the activist who last month was sentenced to nearly six more years in prison for her work on behalf of women’s rights.

“I made this film for Omar and Loujain,” Fogel said. “I made it for all the people who are suffering because they speak of freedom.” He says he hopes Abdulaziz’s unblinking stance will prompt other young people to take up activism. He also wants to show that Khashoggi’s tale offers not just tragedy but a legacy.

Abdulaziz began his activism in his early 20s, attracting attention with his cogent video posts, in Arabic, criticizing Mohammed and the Saudi government; he fled to Canada when he learned Saudi authorities were seeking him out. Abdulaziz would link up with Khashoggi in a kind of marriage of complements: The elder journalist guided him with his insider knowledge of the kingdom; the youthful activist contributed his knowledge of social media and reaching young people in a country where more than 40 percent of the population is younger than 25.

In March 2018, with Abdulaziz’s profile growing, the Saudi government dispatched a prominent lawyer and talk-show host to Montreal, coercing Abdulaziz’s brother to come along for added leverage. The men tried to entice Abdulaziz to return to Saudi Arabia with promises of a talk show, Abdulaziz said, and then urged him to visit the Saudi Embassy in Ottawa to “renew his passport.”

The activist consulted Khashoggi, who told him it was dangerous to do either of those things. He counseled him to refuse. Abdulaziz stayed put, and the lawyer and host returned to the kingdom. Abdulaziz’s brother Ahmed was subsequently arrested and jailed along with 23 of the dissident’s friends. Another brother was later arrested. Abdulaziz has continued to tweet.

He paused. “All these threats are just motivating me.”

“It’s a very precarious position he’s in — he’s very exposed,” Browder said in an interview. “The Saudis have all the resources in the world. And we know how they go after their enemies.”

Browder, who has worked pro bono to spread word of the film in Washington, is thought to be under significant threat himself from Russian authorities for campaigning for sanction-based anti-corruption laws known as “Magnitsky laws,” named for his lawyer allegedly killed by Russian authorities. Browder says that he thinks Abdulaziz is in a predicament he knows well.

“The human body doesn’t have the capacity to live in fear full time; you become accustomed to risk and adrenaline levels go down,” he said. “You almost have to train yourself to be vigilant.”

While Mohammed has said he is a reformer, the nonprofit Freedom House ranked Saudi Arabia seventh-worst in political rights and civil liberties among the world’s 49 countries considered “not free,” noting “extensive surveillance” and “the criminalization of dissent.”

Abdulaziz says the censorship situation has gotten worse, particularly with the flies that pervade the domestic Internet.

“You can see their work everywhere. You’ll be on Twitter at 6 a.m. and see messages about Selena Gomez, and then at 8 a.m. about the Weeknd,” he said. “And then at 10 a.m., suddenly it’s ‘MBS is the most beautiful person in the world’ from so many places, just to make sure everything looks great and nobody hears any criticism.”

Abdulaziz says he thinks a new administration in the White House might press the regime harder on these issues. Already there are signs that there will be a greater holding of Mohammed to account on Khashoggi, a campaign promise of President-elect Joe Biden. And Saudi Arabia last week ended the long-running Qatar blockade in an apparent gesture of conciliation.

Experts are only slightly optimistic.

“A lot of this depends on how much internal will the new administration has to confront Saudi Arabia, and I don’t know that they do. They will have their hands full with a new Iran deal, and they don’t want the Saudis to make their lives miserable on that,” said Hamid, the Brookings expert. “For anyone expecting a significant shift, unless there is serious pressure on the U.S., I don’t think it happens,” he said.

One way to raise the heat globally, he noted, would be “The Dissident.” That could be tricky internationally, since without a major streaming deal the movie must be released through a cross-section of distributors and release dates in various countries, from Turkey to the United Kingdom (there are no current plans for Saudi Arabia). There is a strong possibility, Fogel says, the film will get a release window on Amazon in the United Kingdom after its theatrical release there this spring. An Amazon U.K. spokesman did not respond to a request for comment.

In the meantime, Briarcliff is using outdoor and online advertising to drive people to rent the film on digital platforms.

“There’s a lot of competition on-demand. But you can also keep your movie out there for a long period of time,” Ortenberg said.

He said Abdulaziz’s saga was a main reason he bought the film.

“Omar’s story is virtually unknown in most of the world. That needs to change,” he said.

The activist said he is not seeking attention, just a chance to do his work without worrying about his family. He received another warning from the RCMP only a few days ago — he asked not to reveal its specifics — and his brothers remain in jail because of his tweets. He says he last communicated with his father in August, when messages to him began going unreturned.

Abdulaziz thinks that his father has been threatened with punishment if he speaks to his son.

“It’s better for all of them not to talk to me,” the activist said with a shrug, but a tear could be seen welling up on the screen.

He said thinking about Khashoggi is one of the few things that makes the pain bearable.

“I can hear Jamal’s voice. I can hear him saying, ‘We have a message to send. Let’s unleash the bees.’ ”