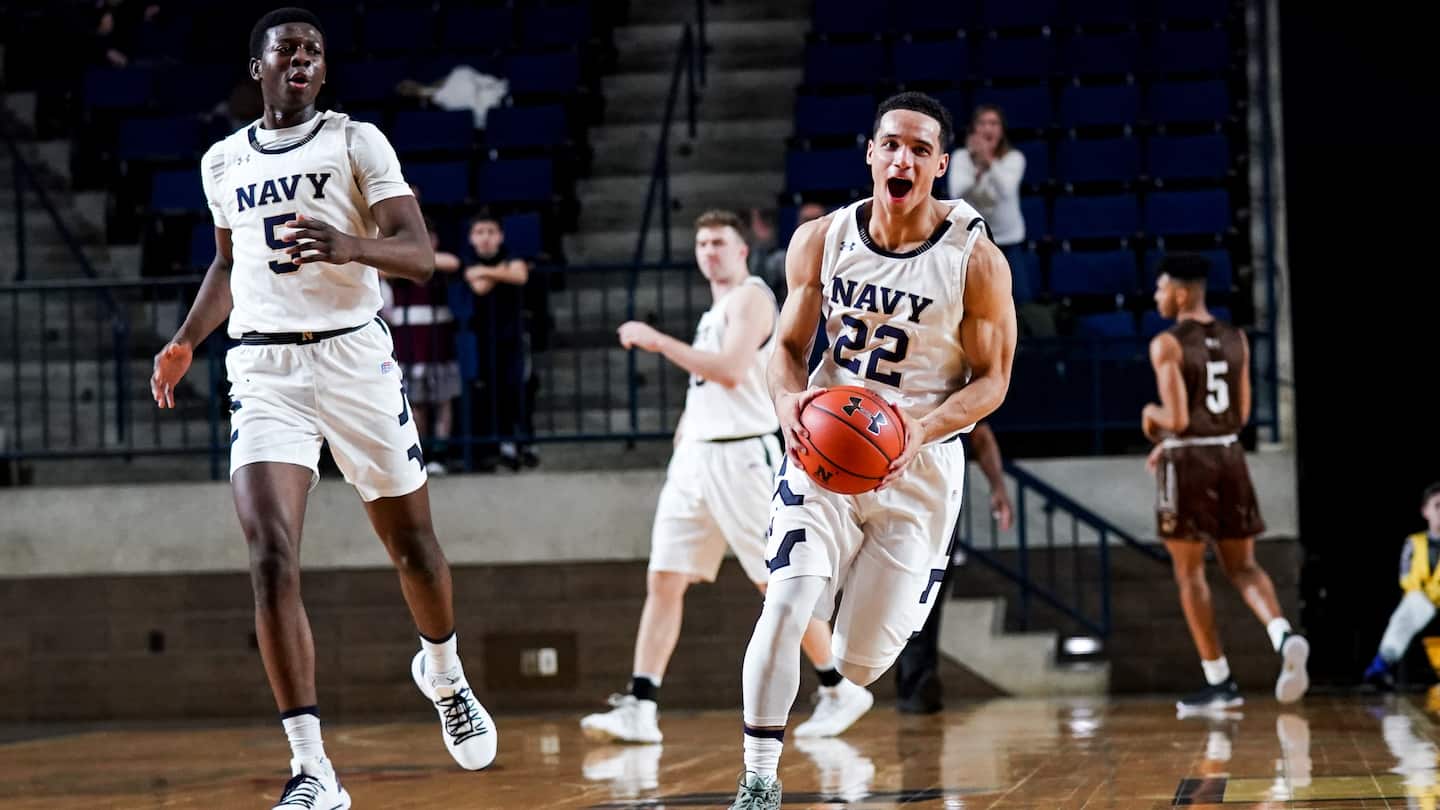 “My parents always told me to use basketball, not let basketball use me,” he said Monday on a Zoom call while sitting in his dorm room at Bancroft Hall. “Basketball gave me the opportunity to be here, and I will always be grateful for that.”

“Here” goes well beyond being the captain of the Midshipmen, currently 9-1 overall and 6-0 in the Patriot League. He also leads the team in scoring (18.6 points per game), assists (2.9) and steals (1.6). He hit the winning basket in the final seconds of a game at Bucknell and scored 34 points Saturday in an 87-86 overtime win over American.

Not bad for a 6-foot guard who had attracted exactly zero interest from Division I schools after his junior year of high school.

But basketball numbers don’t begin to describe Davis’s “here.” He’s not only the captain of the basketball team; he was elected captain of the academy’s 33 varsity sports captains. He will graduate in May with a degree in ocean engineering and then go to the Massachusetts Institute of Technology to get a graduate degree in applied ocean science and engineering before being assigned to an aircraft carrier, where he will be responsible for making sure all of the equipment on the ship works.

In short, as good as he is at basketball — and he’s very good — it isn’t close to being the thing he does best. “He’s a once-in-a-generation kid — not just player,” Navy Coach Ed DeChellis said. “I’ve certainly never coached a kid who was accepted at MIT before. If he chooses to stay in the Navy, I can see him being in an important leadership position in the future. Regardless, he’s going to do something special.”

Navy’s initial interested in Davis came not from his basketball abilities. He was No. 1 in his class at Kickapoo High in Springfield, Mo. His parents, Adrian and Christina, played basketball at Division II Missouri University of Science and Technology. Adrian was an engineer; Christina majored in biology.

“We are definitely a family more comfortable with the sciences, numbers,” Cam Davis said, laughing. “English, history, not so much.”

Impressed by the student, Navy’s coaches began tracking the player. Davis played on an elite AAU team in the summer of 2016, one that included Michael Porter Jr., who went to Missouri for one season before being selected with the 14th pick of the 2018 NBA draft.

“Cam didn’t start, but he played a lot, and you could see he belonged,” DeChellis remembered. “We loved his competitiveness. There was no doubt in my mind he’d get better every year in college.”

DeChellis had that right. Davis came off the bench as a freshman for a very good 20-12 Navy team and averaged 5.2 points. A year later, he was up to 9.8. Then, in his junior season, DeChellis put him at point guard and he thrived, averaging 16.3 points while becoming the team’s clear-cut leader.

This season began with a win over George Washington and a loss at Maryland. Not long after came a trip to Georgetown. “On paper, there’s no one who looks at us and looks at them and thinks we’re going to win,” Davis said. “We aren’t going to overwhelm anyone with our size or our athleticism. But we went in there believing we could win, and we did what we had to in order to win. It meant a lot to us, because it told us we were good, not just that we thought we could be good.”

The winning streak is now at eight, including a 6-0 start in the Patriot League. The Mids last won a Patriot League title in 1998. “I honestly think we can be one of those Cinderella teams, like UMBC was in 2018,” Davis said. “Our goal is to win the Patriot League and get back to the NCAA tournament. But the dream doesn’t end there.”

Navy has had two close calls in league play. The first came at Bucknell, when the Mids blew a 12-point lead late and trailed by one in the final seconds. They ran their “Victory Drill,” a play they work on at the end of practice every day. The ball came to Davis at the foul line with the option to find an open man or shoot. He had space, so he shot — swish.

“I’ve practiced that shot since I was 7 years old,” he said. “We run the play every day to the point where we’re sick of it. But I’m glad the coaches made us do it, and I know we’ll keep on doing it.”

The other close call was Saturday against American. Navy trailed by 11 before rallying to win in overtime. Davis had a career-high 34 points, insisting, “I played a small role in the comeback.”

And Michael Jordan contributed to the Bulls’ six NBA titles.

In this strangest of basketball seasons, Navy will play archrival Army four times, beginning with two games this weekend in Annapolis. For all the talk about mutual respect and a shared mission — all true — the intensity when the schools play in any sport is often off the charts.

“The games will be bloodbaths,” Davis said. “There will be sharks in the water on both sides. They’re good; we’re good. That will make it that much more intense.”

Army is, in fact, also good. The Black Knights are 8-3 overall and 4-2 in the conference, and they’re coming off a sweep of Boston University, last season’s Patriot League tournament champion.

As much as Davis would like to play his final basketball game in the NCAA tournament, his goals go well beyond the sport.

“I’ve loved this game since I was 5 years old,” he said. “… Basketball is a beautiful game, but I’ll have no trouble walking away when this season’s over.

“I think all of us at Navy and at Army have a responsibility to lead our country in the years to come. In the last few months there’s been an increase in social awareness in a lot of ways, but we still have a long way to go. I don’t see what’s gone on as negative or feel disappointed about what’s happening. I’m optimistic. I see where we are right now as an opportunity, and I’d really like to be part of the group that changes the world, that moves us in the direction of the finish line. I think there will be history books written about what we do and how we changed the narrative of a country that was founded on racism. I want to leave a footprint here at the academy, but not just as a basketball player.”

For the next few weeks, though, Davis’s focus will be on basketball. When it’s over, he’ll walk away with a smile on his face.

“What basketball has done for me isn’t a cul-de-sac; it’s an avenue that will keep on running long after I stop playing,” he said. “It’s opened so many doors for me. But when it’s time to lay the dog to rest, you lay the dog down. I know I’ll walk away, fully satisfied.”

There aren’t many athletes, no matter how high they climb, who can say that. Then again, Davis is anything but a typical athlete.