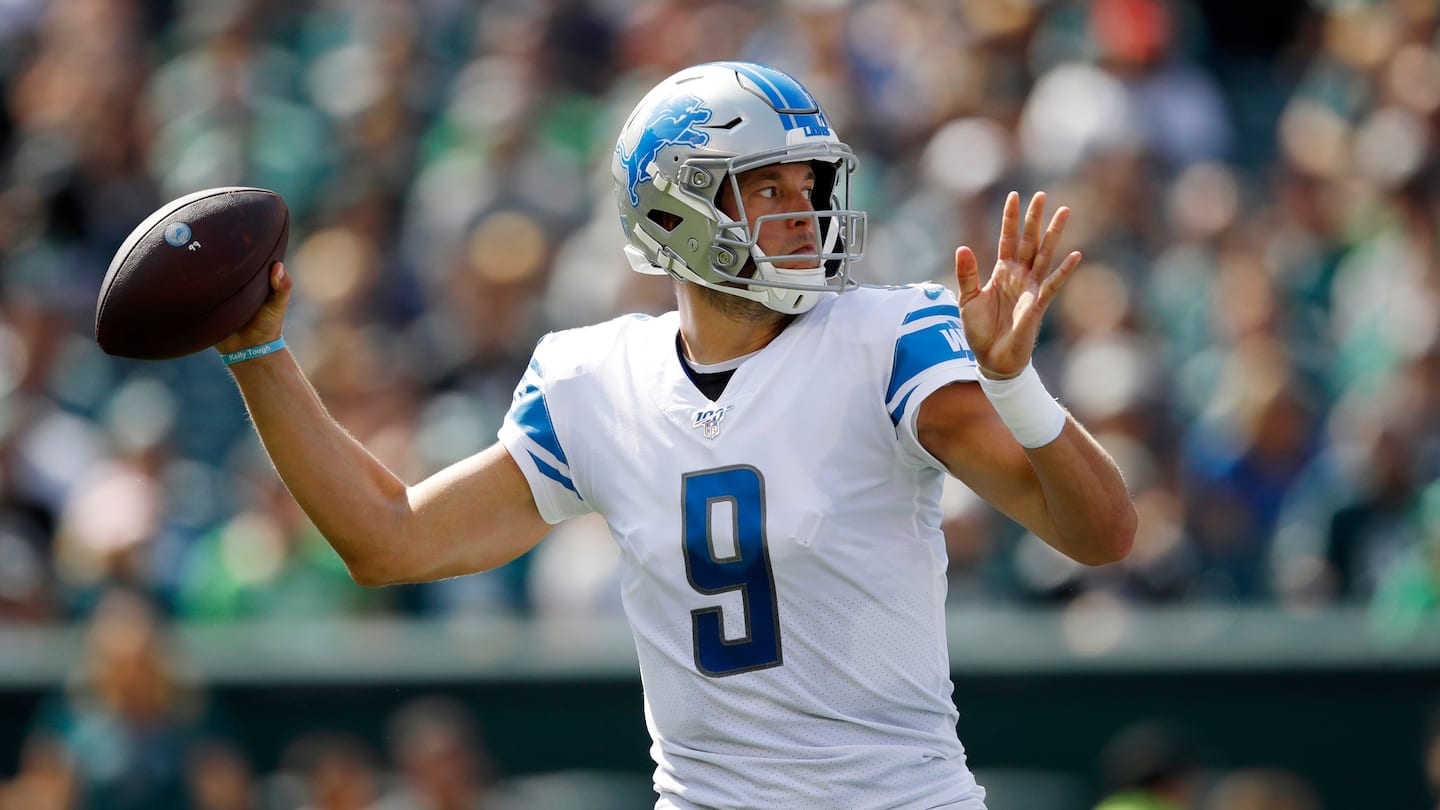 The coach and his new brain trust, general manager Martin Mayhew and executive vice president of football/player personnel Marty Hurney, have several options for bringing in a new quarterback. They could trade for a veteran, sign a free agent or draft a prospect at No. 19 (or earlier, if they trade up).

One of the most sensical veteran choices is Detroit Lions’ longtime quarterback Matthew Stafford, who will turn 33 on Feb. 7. The Lions granted Stafford’s request to leave Detroit this offseason as the organization undergoes its third overhaul of his tenure. The No. 1 pick in 2009 is one of the most talented players at his position and age to become available via trade in some time.

What’s the scouting report on Stafford?

He is still considered to be one of the better quarterbacks in the NFL, with one of the league’s strongest arms, 12 years of experience and unquestioned toughness. He put many of those traits on display in a win over Washington last fall when he threw for 276 yards, three touchdowns and no picks.

For someone who takes deep shots and has a big arm, he has done a relatively good job of not turning the ball over; his 1.9 percent interception rate last season ranked 14th of 35 qualified passers. He’s also proven capable of winning late, having led 31 fourth-quarter comebacks in his career.

One of Stafford’s relative weaknesses is accuracy. He’s never completed better than 67.2 percent of his passes, a middling number in the modern NFL. In 2018, Peyton Manning broke down film on Stafford and chided him for staring down receivers, saying, “Even though if you know you’re gonna throw it out there to the right and to the flat, look left to start, or look down the middle. Don’t let those defensive linemen know where you’re going.”

Overall, though, Stafford is arguably one of the best 10 or 15 quarterbacks in the league, and a player capable of providing a significant upgrade for Washington.

But didn’t he struggle with injuries?

Yes, and he’s also one of the game’s toughest quarterbacks. Last season, he started all 16 games despite rib, thumb, ankle and neck injuries. The only time he missed games due to injury over the last decade was in 2019, when he suffered multiple broken bones in his back and sat out the team’s final eight games.

Injuries are not expected to limit Stafford in 2021. And even if they did, he’s shown no reticence to play when hurt. In Week 15, with the Lions out of playoff contention, Stafford played through torn cartilage in his rib cage that gave him body spasms.

How would he fit in Washington?

Stafford would immediately upgrade the position for Washington. The team has plenty of issues to solve on offense — filling out its receiver corps behind Terry McLaurin, re-signing right guard Brandon Scherff, etc. — but quarterback is the most important.

Last season, a low-ceiling offense was limited by its quarterback play. Even Alex Smith, who excelled at the intangibles and the Xs and Os battle before the snap, struggled. His 80.4 passer rating ranked 31st of out of 35 qualified quarterbacks. Stafford, with a better supporting cast, ranked 14th (96.3). It remains to be seen whether Smith will return to Washington, but it is highly unlikely that the team could afford to retain Smith and add Stafford.

Stafford has a team-friendly deal with two years and $43 million remaining. In 2021, he’s owed $20 million, and in 2022, $23 million. This is manageable for Washington, which has about $35 million in cap space this season and could create more by releasing Smith or reworking his deal ($23.3 million cap hit this year). Stafford’s contract will rank about 19th in average annual value for quarterbacks in the next two seasons, according to Over The Cap.

Perhaps most important: Even if the salary cap falls to $175 million per team as a result of the NFL’s lost revenue due to the pandemic, Stafford will still only account for about 11 percent of it — allowing Washington plenty of room to address other positions on the roster. It is possible, however, that Stafford, who will have a voice in Detroit’s trade process, could insist upon getting a new contract as part of any deal.

Which other teams will be in the Stafford sweepstakes?

Indianapolis, San Francisco, New England, Denver and New Orleans could all pursue Stafford. The Colts would seem to be the strongest contender, with plenty of cap space and a championship-caliber roster coming off an 11-5 season. This includes, importantly, depth at skill positions and an elite offensive line.

What would it take for a trade to get done?

It appears likely that a trade for Stafford would likely require a first-round pick in addition to another second- or third-rounder, based on the number of teams expected to be interested. Other teams have higher first-round picks than Washington, such as Denver (No. 9), San Francisco (No. 12) and New England (No. 15), but Washington has an extra third-round pick (No. 74) from last year’s Trent Williams trade that could help the team in putting together a trade offer.