How many Americans are unemployed? It’s likely a lot more than 10 million 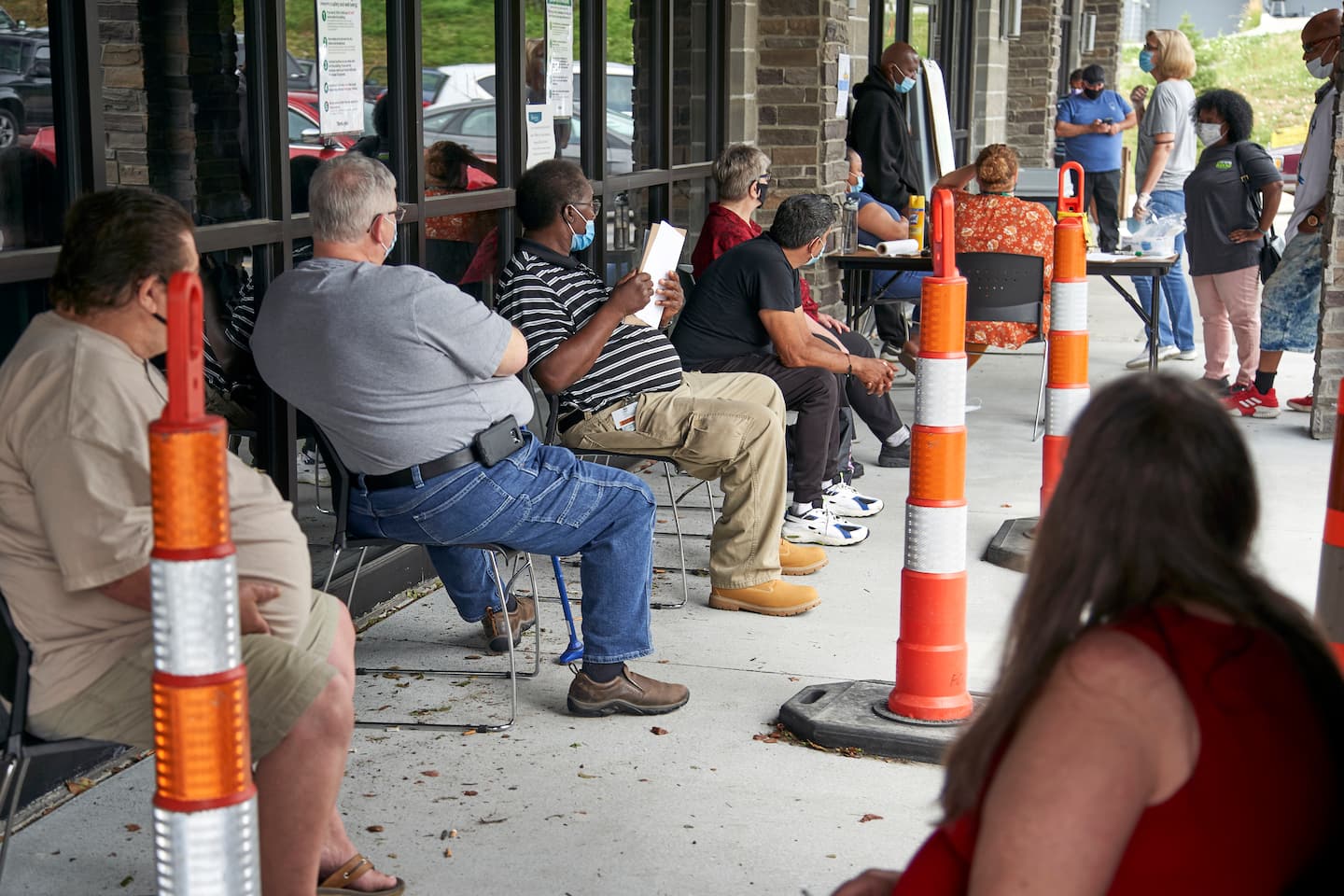 But there’s another government data source that indicates a much higher number of unemployed. Every Thursday, the Labor Department reports how many people are receiving jobless aid from the government. The latest data indicates 18.3 million people were receiving weekly unemployment payments through Jan. 30. That figure fluctuates a bit week to week, but it has hovered close to 20 million for the past few months. Top White House officials often cite this number when they talk about the economic pain the country is still facing and make the case for another round of aid, including more stimulus payments to individuals.

There’s a big gap between 10 million and nearly 20 million unemployed. It creates a lot of confusion. Both figures have major flaws right now, and experts say 10 million is probably too low and 20 million is too high. Neither figure is an accurate portrayal of how many Americans have been knocked out of jobs in this deadly pandemic, some economists say.

Why is there such a big gap in the data?

The first thing to understand is how each figure is derived. The 10.1 million unemployed data point comes from a survey of 60,000 households the Census Bureau collects each month. All the adults in the household are asked a series of questions about whether they are employed full or part time, if they are looking for work or if they have given up and stopped looking for a job. To be considered officially unemployed, someone must have searched for a job within the past month.

In normal times, this monthly survey works pretty well, but these are not normal times. Response rates to this survey have fallen during the pandemic, and low-income families that have been hit hardest by the pandemic and job losses have been the least likely to respond, census researchers found.

Another unusual challenge of this pandemic is a lot of people aren’t sure if they are truly unemployed or just on an extended absence from work. The Labor Department has been open about a “misclassification error” in which some people who should have been marked as “temporarily unemployed” were instead classified as employed but “absent” from work for “other reasons.” This issue makes the unemployment figures look better than they are.

The last big issue is a lot of people have simply stopped looking for work during the pandemic. To be counted as unemployed, a person has to have actively searched for a job in the past month. About 5 million people have ceased looking, including many mothers who had to quit work or stop hunting for jobs to care for children learning from home, while schools are closed. That’s why a lot of economists say the 10.1 million figure probably underestimates the true number of people who are unemployed in this pandemic.

Given the flaws in the monthly jobs report, many economists, Wall Street analysts and government officials began relying on the Labor Department’s weekly report on how many Americans are receiving unemployment insurance. It seemed like a more straightforward report, but it also turned out to have its own big drawbacks that probably overstate the number of people on unemployment.

First off, the data comes from each state, and many states have had severe problems processing unemployment applications. Second, the data each state sends to the Labor Department is about how many claims were processed in the prior week. Often times, states have processed four, eight or even 20 weeks of unemployment claims for the same person all at once. So instead of counting that as one person on unemployment, it can look like 20 people on unemployment in that week’s data.

The nonpartisan Government Accountability Office issued a scathing report in November about how unreliably and probably inflated the weekly jobless claims data is. The top issues cited were: backlogs, fraud and inconsistent data reporting state by state. The GAO pointed out states struggled especially to report accurately on the “Pandemic Unemployment Assistance,” a program Congress created in March to give unemployment to gig workers, self-employed and people who had to stop working to care for kids at home or sick relatives. Consider that Ohio just reported 232,016 new PUA claims versus 10,156 the week before. Meanwhile, Colorado reported zero PUA claims last week.

“All of this means we need to invest in our data systems,” said Shierholz, the former Labor Department economist. “The problems with weekly unemployed data are unacceptable and can never be allowed to happen again.”

A final hitch with claiming about 20 million people are on unemployment is that some people receiving that government aid have a job, but it’s only part time. Those people are also eligible for some unemployment aid. States do not say how many people are in this situation.

So how many people are unemployed?

All of these issues with the usual go-to data sources have led many economists to come up with their own estimates for how many people are unemployed.

Federal Reserve Chair Jerome H. Powell recently said he thinks the true unemployment rate was “close to 10 percent in January,” implying about 16 million workers are unemployed among the 160 million Americans in the labor force. He generates that figure by taking the Labor Department’s count of the unemployed (10.1 million) and then adding back people who were misclassified as employed but “absent” from work (just under 1 million) and people who dropped out of the labor force (about 5 million).

Economist Mary Daly, head of the San Francisco Fed, also dismissed the official unemployment data as too low in a tweet Wednesday. “What is the real unemployment rate? Not 6.3%,” she wrote. “How can we know? Look around. Millions of people on unemployment benefits. Lines at food banks. Countless workers out of the labor force taking care of families.”

Coming up with an alternate estimate is tricky. Jason Furman, President Barack Obama’s former chief economist, estimates the unemployment rate right now is probably 8.3 percent — or about 13.3 million unemployed. He takes the official unemployed count (10.1 million) and then adds back the people who were misclassified as “absent” from work (just under 1 million) and then about half the people who dropped out of the labor force (he uses 2.5 million for this — fewer than the Fed’s calculation because he points out that more people always drop out during downturns, so he doesn’t think it’s appropriate to use the full amount).

Doug Holtz-Eakin, former head of the Congressional Budget Office and adviser to GOP presidential candidate John McCain, says he is focusing on how many people are employed now versus pre-pandemic.

The employment-to-population ratio was 61.1 percent before the pandemic hit, meaning 61.1 percent of adult Americans had jobs. That plunged to 51.3 percent in April and has rebounded only partially to 57.5 percent in January. Using Holtz-Eakin’s preferred metric, nearly 10 million people are still out of work amid the pandemic.

Holtz-Eakin says he does not fault the Labor Department for the data quirks right now. There was no precedent for this, and the statistical agencies are doing the best they can to adjust.

“The statistics are as good as you can get,” Holtz-Eakin said. “The difficulty is the environment we are in during a pandemic. The problem is not the people doing the surveys.”

Shierholz, the former Labor Department economist, says she thinks the best answer to how many people are still affected economically by the pandemic is 25.5 million.

She comes up with that figure by taking the 10.1 million officially unemployed and then adding 3.5 million who didn’t respond to the survey or were misclassified, 5.1 million who dropped out of the labor force and then 6.8 million who have experienced some sort of cut in hours or wages. This is a much more expansive way of looking at who has been hit by the pandemic. Without that pay cut category, Shierholz estimates nearly 19 million people are unemployed.

The bottom line is the United States lacks great data on such a fundamental question right now: How many Americans are unemployed?

Many economists urge federal and state governments to improve the unemployment system — and the tracking of who’s getting unemployment money each week. That would give the best real-time indicator in future downturns. But right now, statisticians are simply doing the best they can in a pandemic.

The corporate minimum tax could hit these ultra-profitable companies

The most-regretted baby names, and more!

Kalorama house is on the market for $4.5 million