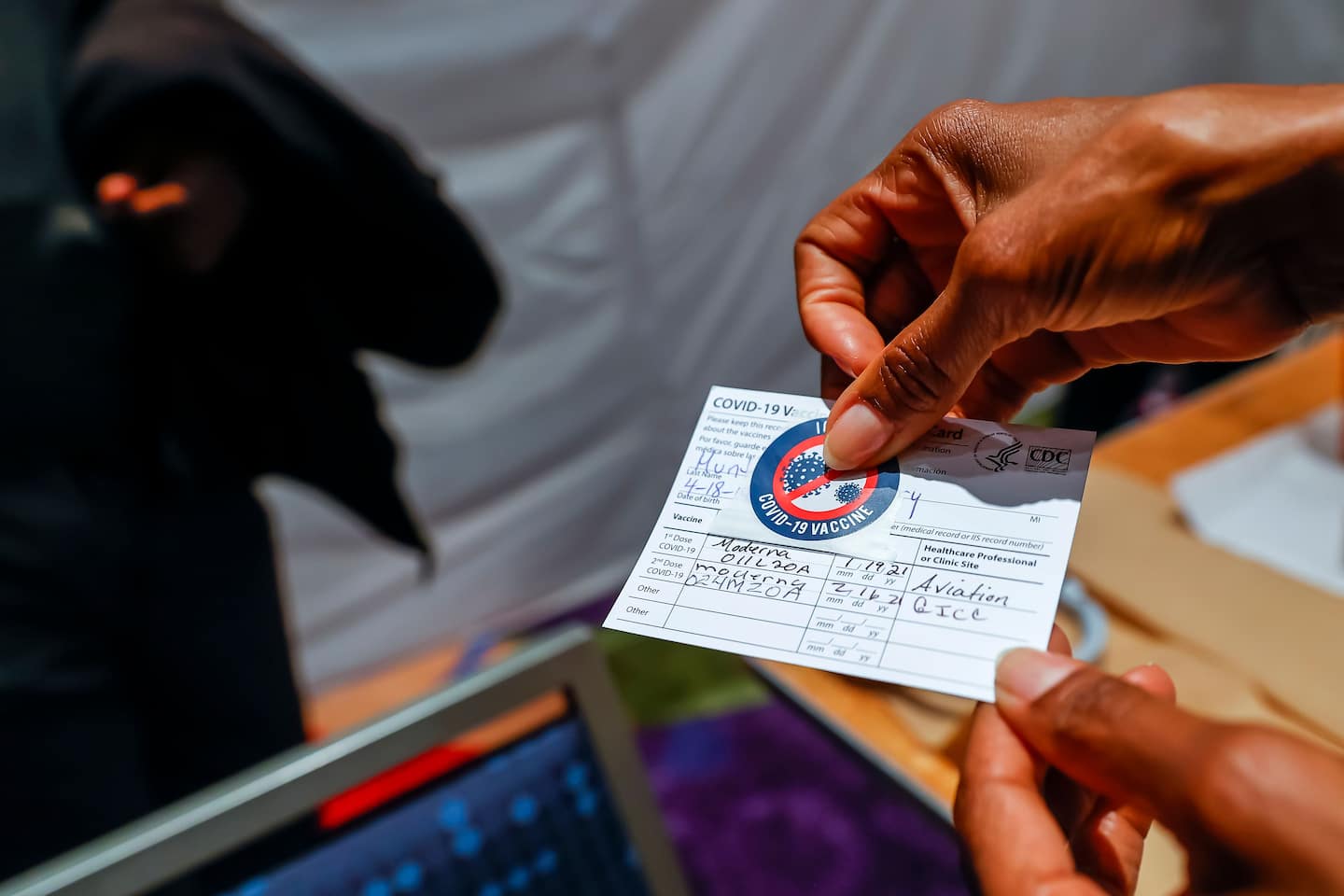 So when is it okay to ask and, more important, mandate that people inoculate themselves for the greater good?

If I’ve been vaccinated against the coronavirus, would it be appropriate to let a potential employer know that, to make me a more desirable job candidate?

In fact, Art Caplan, a professor of bioethics and head of the division of medical ethics at New York University School of Medicine, thinks the vaccine will become “a ticket to hiring.”

“Some businesses are going to be able to make a convincing ethical case that you better be vaccinated to protect your co-workers and protect your customers,” he explained. “I think it will become pretty routine.”

Sharing vaccination status with an employer is also legal.

Some candidates may even think it makes sense to offer that information when applying for certain jobs, particularly ones that involve significant travel, sales or interacting with the public, said Dan Kadish, a senior associate at Morgan Lewis in New York.

It’s what a potential employer does with that information that matters.

Could a potential employer choose to hire me — or not hire me — based on my vaccination status?

Attorneys say that when it is necessary for the job, yes, it would be legal for employers to make hiring decisions based on whether applicants have been vaccinated against the virus. However, health-care labor and employment attorney Kevin Troutman noted that employers who are screening applicants based even partly on their vaccination records should be holding current employees in similar positions to those same standards.

“They’ve got to be able to establish and prove why it’s a job-related requirement,” Troutman said.

Still, even though it may be legal to hire, or not hire, certain applicants, possible ethical questions could come into play, assuming potential employers use solely that vaccination information when doing their hiring, said Amber Clayton, director of the Knowledge Center at the Society for Human Research Management in Alexandria, Va. For instance, she said, a potential employer may not be aware that a qualified but unvaccinated applicant could not take the vaccine because of a disability or religious reason.

How would this apply to me if I, as an individual, want to hire someone?

The rules are different for private citizens hiring, say, a nanny, a housekeeper or a contractor to build out that home office.

Because federal nondiscrimination laws do not typically apply to individuals, they would have even fewer restrictions on asking potential employees about their vaccination status and making hiring decisions based on it. Still, Troutman, a member of the covid task force at Fisher Phillips in Houston, said it would be prudent to check state laws, especially as vaccines — and the state legislation surrounding them — evolve.

What about my current employer — could she ask me whether I’ve been vaccinated?

Yes, at least from a legal standpoint.

When an employee has not been vaccinated, however, the employer must be careful not to pry as to why, particularly in situations in which vaccinations are voluntary and not required for the job.

“What we are cautioning employers not to do is to ask for additional information,” said Kadish, who is one of the leaders on the covid compliance and counseling team at Morgan Lewis. He explained that further questioning could inadvertently lead to a medical inquiry protected under the Americans With Disabilities Act (ADA). “Those types of medical inquiries are only permitted where they are necessary for the job,” he said.

If I’m not vaccinated, could my employer require me to get the vaccine?

It may depend on the job, but yes. Employers can legally require employees to get vaccinated, assuming they can establish it is a legitimate job requirement and assuming they make reasonable accommodations for workers who cannot take the vaccine because of disabilities or religious reasons.

“The thought process is the vaccine stops people from having severe illness or developing severe complications from covid-19, and so it could help the individual from becoming a direct threat to themselves or others in the workplace,” Kadish said.

But Kadish added that rather than mandating vaccinations, some employers have started offering incentives such as gift cards and additional paid leave to encourage their workers to get the shots.

Could the legality of this change depending on the state?

“It most certainly can and we think most likely will,” Kadish, the attorney at Morgan Lewis, said.

“Currently across the country, there are dozens of different state bills pending that would have something to do with a mandatory vaccine or prohibition on mandatory vaccine,” Kadish added.

There is legislation pending in a handful of states that addresses vaccine mandates and employment practices concerning vaccination. And once law, state legislation will supersede federal guidance on the matter.

Kadish said employers need to be aware of the rules in their states, especially in big states such as California, Illinois and New York, and locations where employers have a large number of employees.

Legality aside, are these vaccine questions ethical?

Now that depends on whom you ask.

Caplan, with the New York University School of Medicine, said although employees are under no moral obligation to answer the vaccine question, “I think employers can and will be asking. It’s going to become more routine, particularly with vaccines starting to get more widely distributed. They’re going to ask, ‘Have you had covid?’ ‘Have you been vaccinated?’ ”

He said that some businesses in particular will want to be able to say their workers are vaccinated.

“Morally, I think to reassure people it’s safe, businesses will want to make sure everybody is vaccinated and protected to encourage people to get back on a cruise boat, an airline, go back into a gym,” he said.

But Jeffrey Kahn, director of the Johns Hopkins Berman Institute of Bioethics, disagrees. He said he does not think it is ethical to ask employees whether they have taken a vaccine because many of them have not had the opportunity to get one.

“A lot of people would like to be vaccinated but can’t yet,” he said. “So until we’re in a situation where everybody who wants to be vaccinated is able to, it really makes it wrong to ask people because you’re effectively saying, ‘We will give an advantage to people who somehow either have fallen into the groups that have access already or people who’ve managed to find a way to get vaccinated even though they don’t seem to qualify yet.’ ”

Still, as more people get vaccinated, Caplan said the question is going to be a common one.

Bustin’ loose from the pandemic: A birthday party with D.C. power brokers shows what celebrations might look like