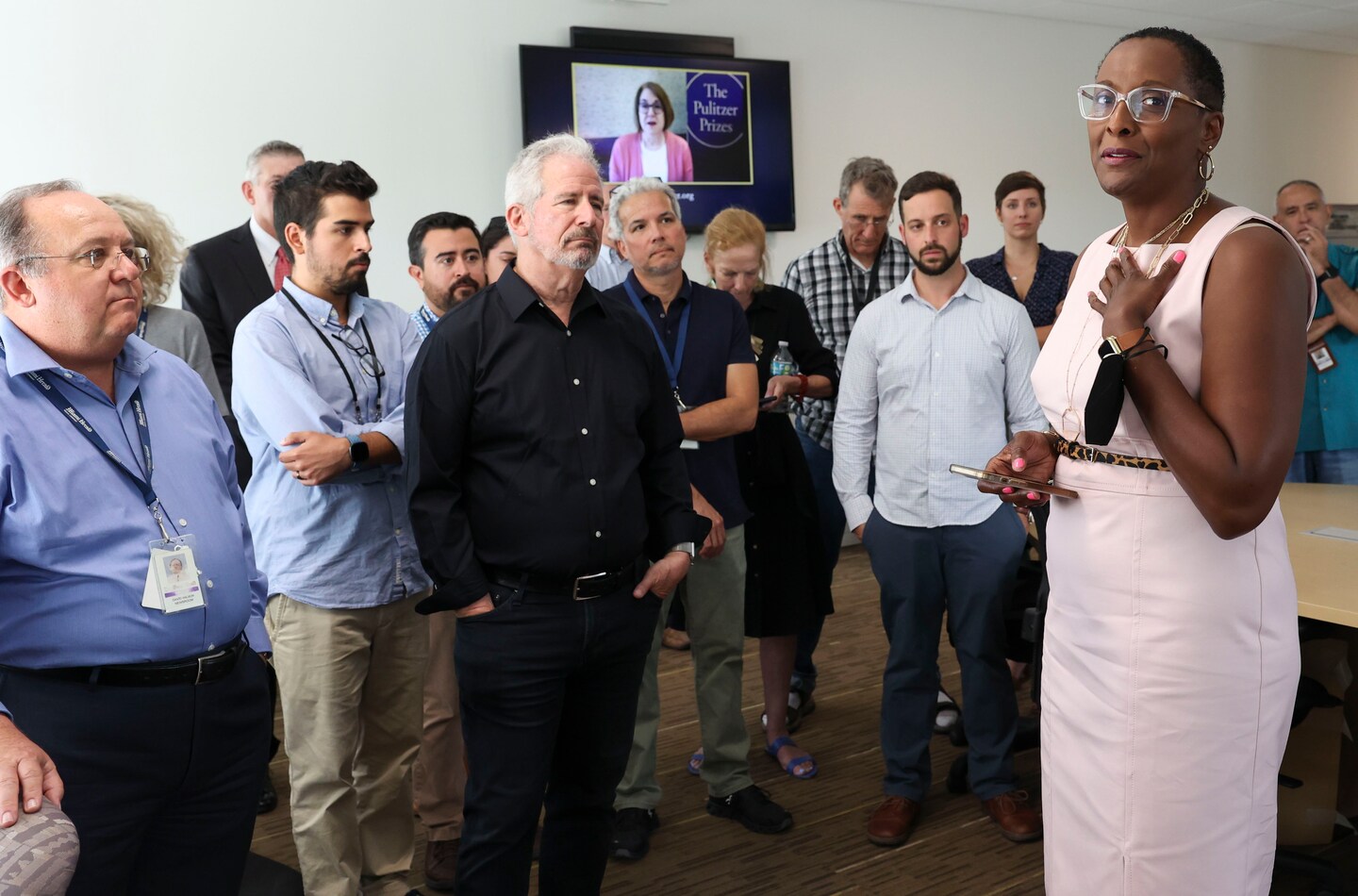 If so, congratulations: You’ve won a Pulitzer Prize, journalism’s highest honor and a distinction that confers $15,000, a free lunch and perhaps the most underrated perk of all: a carefully edited citation, complete with copious (read: extraneous) adverbs and adjectives, praising your work. That flowery language — a blast of flattery that humble old you would never dare formulate — is sure to be quoted in the fawning Pulitzer media coverage, your speaker bio and perhaps even your obituary.

Jennifer Senior, a staff writer at the Atlantic, won this year’s Pulitzer in the feature category for a, well, let’s let the Pulitzer people describe it: “For an unflinching portrait of a family’s reckoning with loss in the 20 years since 9/11, masterfully braiding the author’s personal connection to the story with sensitive reporting that reveals the long reach of grief.” Now that’s some feature-style citation writing. Saul Pett of the Associated Press, were he alive today, might envy Senior’s treatment, considering that his 1982 citation in the same category consisted of these seven words: “For an article profiling the federal bureaucracy.”

Reached by phone, Senior referred questions about the description to the Atlantic’s editor in chief, Jeffrey Goldberg.

“I think it does a pretty good job,” Goldberg told the Erik Wemple Blog. “It certainly means they read it.” The Atlantic may well have earned the highest honor ever accorded to a piece of anniversary journalism, a category that veers toward the predictable and sentimental. “It’s a testament to the strength of Jen Senior’s writing and reporting that what technically could be categorized as an anniversary story won a Pulitzer.”

Marjorie Miller, administrator of the Pulitzer Prizes, says that people have a lot of options when it comes to reading material, a dynamic with implications for the citations for both traditional journalism and the book categories. “We want to make sure that they are really evocative, and try as best as you can to tell people what the book is about so they want to read the book or the journalism,” says Miller. There’s been a movement to make the citations “stronger over time,” she noted.

A dip into the archives provides some supporting evidence for Miller’s point about the shift. The Post on Monday won the Public Service prize — which awards a gold medal instead of cash — for “its compellingly told and vividly presented account of the assault on Washington on January 6, 2021, providing the public with a thorough and unflinching understanding of one of the nation’s darkest days.” (Reporters who flinch stand no shot with the Pulitzer board.)

Compare that flourish with the citation for The Post’s public service award from 1973: “for its investigation of the Watergate case.”

“It reflects an understated style that was prevalent back in that time,” The Post’s Woodward, sounding unaggrieved at this historic slight, told the Erik Wemple Blog.

That understated style came through in the category of “Telegraphic Reporting – National,” which celebrated the work of the Baltimore Sun’s Dewey L. Fleming, “For his distinguished reporting during the year 1943.”

Full-throated endorsements aren’t an exclusively modern thing, however, as this 1933 citation for Associated Press reporter Francis A. Jamieson makes clear: “For his prompt, full, skillful and prolonged coverage of news of the kidnapping of the infant son of Charles Lindbergh on March 1, 1932, from the first announcement of the kidnapping until after the discovery of the baby’s body nearby the Lindbergh home on May 12.”

Pulitzer juries — generally a half-dozen journalists — sift through mountains of submissions in arriving at their nominations for finalists. Before handing off their choices to the all-powerful Pulitzer board, they take a first whack at the citations. Tone is a key consideration. “Clearly you don’t want to overstate the case because that would run contrary to the core principles of journalism, of telling the truth,” says Jeffrey Good, a veteran journalist who has worked on four Pulitzer juries. “In my experience, when we were effusive, effusiveness was warranted.”

Scrolling through archival Pulitzer citations yields hints of journalistic sensibilities that have gone the way of the afternoon paper. The notion, for instance, that newspapers orchestrate advocacy “campaigns” runs strong in early Pulitzer citations in the public service category. The Indianapolis News won that recognition in 1932 for “its successful campaign to eliminate waste in city management and to reduce the tax levy”; the Whiteville News Reporter and Tabor City Tribune of North Carolina secured the same prize in 1953 for “their successful campaign against the Ku Klux Klan, waged on their own doorstep at the risk of economic loss and personal danger, culminating in the conviction of over one hundred Klansmen and an end to terrorism in their communities.”

Such “campaign” references in the public service citations remained robust through the 1960s and then petered out (with one each in 1971 and 1983). Matthew Pressman, who chronicled 20th-century journalism currents in his book “On Press: The Liberal Values That Shaped the News,” writes via email: “With the increase in accusations of political bias against the news media starting in the late ’60s, journalists — and especially managers — at mainstream newspapers didn’t want to be seen as ‘campaigning’ for anything.” (Pressman cautioned that he’s not privy to the Pulitzer board’s rationale for its diction.)

“[N]ot a conscious stylistic departure,” notes Deputy Administrator Edward Kliment, who points out that “campaign” still occasionally pops up in the “editorial writing” category. “It may have more to do with changes in the descriptions used by journalists.”

Heavier rotation of adverbs and adjectives in public-service citations started in the 1990s. Whereas the board was once content to credit reporting that merely “examined environmental threats and damage,” it began to hype shoe-leather efforts such as a “detailed and unflinching examination of systematic problems within the U.S. Immigration and Naturalization Service” or a project that “coherently and comprehensively covered the tragic events [of Sept. 11], profiled the victims, and tracked the developing story, locally and globally.”

Which is to say, modern Pulitzer citations might not survive the red pen of your Hemingway-loving high school English teacher.

“I’m a verb kind of girl,” says Miller, who came to the Pulitzers from the linguistically spare pastures of the Associated Press. Even so, Miller espouses no plans to amend the Pulitzers’ florid citation style. “My feeling is, it’s not broken,” she says. Which translates to: If you can’t overuse adverbs and adjectives to laud the country’s best journalism, when can you overuse adverbs and adjectives?

Plus, laying it on thick enchants the people who produced the award-winning work. “We live in a more emotional age. I think I prefer the descriptive slash effusive style,” says Goldberg.