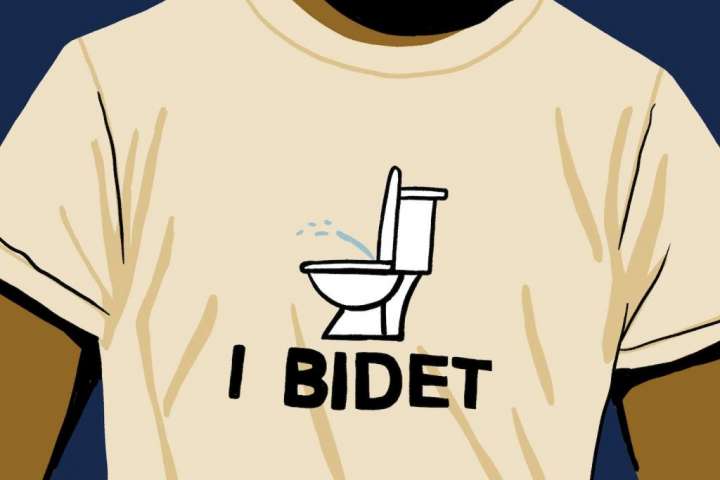 Fourteen years ago, my then-girlfriend used a mystery plant — it looked like parsley and smelled like mint with anxiety — to make guacamole. That was my introduction to cilantro. Since then, I have become a cilantro truther. I put it on everything it makes sense with: tacos, rice, salads, sandwiches, pizza. I even once sampled a cilantro-flavor kombucha, which tasted … well, can something taste demonic?

The reason for this relatively late introduction to my palate is simple: I just didn’t have the exposure. When I was growing up, my parents didn’t use it in our meals. Also, I’m from Pittsburgh. And if you’ve never been, you should know that “I’m from Pittsburgh” is an acceptable answer for everything from “Why can’t you pronounce ‘hallelujah’?” to “Why is your La-Z-Boy in that parking spot?”

But once I became aware of it, and a fan of it, it became a part of my life. Which tends to be how life works for most people. And this is why it is baffling that I do not currently own a bidet.

I first encountered one on a week-long trip to Rome the summer after my freshman year. We were staying at a campus-like villa with a few other college-age sports teams, and I was amused by the weird second toilet in each bathroom. I just assumed that it was an Italian custom to poop with company. (They’re very affectionate people!) But then, one of our coaches told us what it does.

Of course, 19-year-old me’s first reaction was, well, ignorant and embarrassingly homophobic. It had a “suspect” purpose (cleaning your butt), a “suspect” function (spraying water in said butt to clean it) and anyone who dared use it would be victim to an avalanche of jokes. But then one day I decided to use it. And it felt like (stay with me) the time in third grade I first saw the Crayola 64 box. I thought there was only one shade of blue. But then I saw cadet blue. Aquamarine! Mother f—in’ periwinkle! And yes, if it’s not explicit enough, the bidet experience — the radical chill of the stream between my cheeks, the utter bliss of the speck-free booty cleanse — changed my life like an 8-year-old discovering turquoise.

Now, when there’s a bidet available, I bidet. I bidet hard. I bidet like the bidet owes me money. I bidet like today’s the last bidet. I own T-shirts that say “I bidet.” (I don’t actually. But I would if someone gave me one.) I’ve even once pre-bideted, you know, before anything happened. Which felt evolved. But was just messy. Admittedly, my affinity for the bidet isn’t just about function and pleasure. It’s also just a fun word to say. You haven’t lived until you’ve asked a hotel concierge for their recommendation of the city’s finest bidets. And if they ask “What’s a bidet?” and you explain, you’ve just added another member to Team Bidet. Big Bidet should really be giving me royalties now.

Now, when there’s a bidet available, I bidet. I bidet hard. I bidet like the bidet owes me money.

Which is why it’s puzzling that I can’t saunter into one of the bathrooms in my house, and bidet the night away. I have no reason not to own a bidet. I haven’t always been able to afford a bidet. I mean there were times I couldn’t afford toilet paper. (Those days were dark!) But I can now. There are three bathrooms here, which means one of them could be the designated bidet depot. We could have a family bidet. Which would make us the bidet family.

I do wonder if my kids could handle the bidet. It’s like how we don’t give them much candy, because we don’t want them to get hooked and then have to wean them from it. And bidet addiction is a real thing. I’d have to ease them into it. Have them watch some tutorials. Maybe even some testimonies from people who got so deep into the bidet that they returned soaked, shivering and lost. But I think the best way is to tell them it’s like riding a bike. Except instead of a seat, you’re riding a stream of water up your butt. (Maybe I need to workshop that intro some more.)

I think I just don’t think of bidets as something possible for someone like me to own. It’s like buying one would signify some sort of performative metamorphosis. Or would make me a poseur, like I just decided one day to wear leather pants. There’s nothing stopping me from buying the bidet of my dreams. I’ve denied myself too long.

As Langston Hughes once said, “Hold fast to dreams, for if dreams die, life is a broken-winged bird that cannot fly.” I think he wrote that on a bidet.