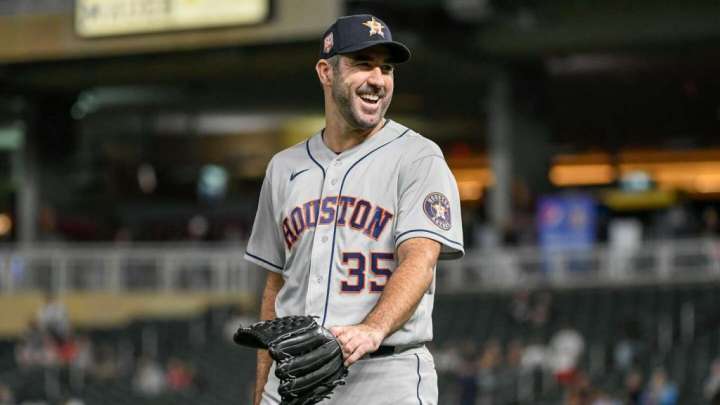 But 39-year-old Houston Astros ace Justin Verlander seems perfectly comfortable admitting the rare fury he once relied on no longer defines him. He needed it then. He doesn’t need it now, not after undergoing Tommy John surgery at 37, when most starters would be counting down to retirement rather than willingly embarking on an 18-month recovery process. He isn’t consumed by it now, with a young daughter at home and the benefit of a year away to remind him what baseball costs those who master it.

“It was always baseball, baseball, baseball for the longest time,” Verlander said. “I still put in all the same amount of work and intensity, but I think maybe just like having the game almost taken away from me, enjoying my life outside of baseball with my daughter and my family, then coming back to it — I’ve just got this new side of me.”

He nearly no-hit the Minnesota Twins this month, the best performance in what became an 11-game Astros winning streak during which the team allowed 10 earned runs. Yet the big news in the Astros’ clubhouse that day was not that Verlander nearly become the third pitcher in major league history with four no-hitters to his name. It was that he had made a joke in the middle of that outing — a surprise because Verlander never allowed much interaction with teammates during starts, let alone humor.

“I never would have done that before. I think that just kind of comes from enjoying it in the moment more,” he said. “I’ve always enjoyed it. I love competition, but so much so that I was blinded by it.”

Dusty Baker returns to D.C. with a red-hot team and an ever-open heart

After the Washington Nationals snapped that winning streak with a 13-run outburst Saturday, it fell to Verlander to secure a series win for the Astros, who began Sunday tied for first in the American League West with the suddenly potent Los Angeles Angels. He worked around a 30-pitch first inning to hold the Nationals hitless into the fifth as Houston secured an 8-0 win. He ended Sunday tied for fourth in the majors with 45⅔ innings pitched, seemingly uninhibited by the fact that he is coming off the kind of surgery that forces much younger pitchers to limit their workloads.

“I wouldn’t say I’m surprised. I would say I’m pleased,” Verlander said of his early success. “If I were surprised, all the hard work I did, what was I doing that for? But it’s nice when you put in that much work to see the results and see the results immediately.”

Verlander paused and knocked on the wooden locker in the visitors’ clubhouse.

“I don’t know how long it will continue,” he added. “But if I could draw it up, work hard and come out of the gate strong, that’s how I would draw it up.”

No one in baseball would have blamed Verlander if he came back a slightly lesser version of himself — if he didn’t average nearly 95 mph on his fastball as he did 15 years ago, if he couldn’t handle the same innings load early in the season as he may have a decade ago. But Verlander would have blamed himself.

In fact, he does blame himself for some of the areas in which he has “struggled” this season — namely that he is not getting nearly as many swings and misses as he did in his prime. Entering Sunday’s start, hitters were swinging and missing on just 14.7 percent of his fastballs, less than half the rate at which they were whiffing in his Cy Young Award-winning 2019 season. That year, Verlander struck out more than 12 batters per nine innings pitched. This year he is striking out eight batters per nine innings. Verlander said he is working “on the swing-and-miss stuff” and emphasized that whatever satisfaction he has with his results so far, it isn’t enough that he is content to be less than he believes he should be.

This is Verlander at 39 — unsatisfied but unburdened by the all-consuming emotional investment the game once required. He still wears his big headphones on start days to shut out teammates and reporters. He spent the hours before Sunday’s warmups hunched over a computer in the video room, chewing on a blue pen he occasionally used to take notes, sipping on coffee and internalizing a game plan.

But when Astros catcher Martín Maldonado had a question about his wine preferences, Verlander pulled off one earphone and responded. He never would have done that in the past, not after a bad season in 2008 left him fuming one morning during an equally disappointing spring in 2009. He carried the anger into a start against the New York Yankees and something clicked.

“That’s when I started full headphones, don’t talk to anybody, like, ‘Don’t bother me; I’ve got a f—ing job to do.’ And I still do that,” Verlander said. “Now it’s less angry and more my routine. I’m not as angry at the world, fuming, get the [heck] out of my way all day. Now it’s just me reminding my body, ‘Hey, today is work day.’ ”

Dusty Baker has managed plenty of Hall of Fame starters with distinct pregame habits, from Greg Maddux to Max Scherzer. Asked about Verlander, Baker struggled to explain what differed.

“They’re all different, but there are a lot of similarities,” Baker said. “Highly competitive. Very studious. They really concentrate on doing their homework.”

Analysis: This MLB season, the ball is making everyone batty

Verlander said he didn’t do as much homework before. Early in his career, he didn’t seek out the data that is so prevalent now, in part because most of it wasn’t as readily available. Looking back, he said, he regrets it. Maybe he could have been even better.

A few seconds later, he changed his mind.

“Maybe I don’t regret it,” Verlander said, realizing as he spoke that part of what helps him put the numbers to work now are the instincts he developed when he was young and had to think his way through things.

“The first 10 years of my career, it was just watch video, see swings, read swings, react — this dance between me and the hitter. That doesn’t happen as often nowadays. But I think it’ll become more en vogue again. You’re seeing guys work on feel more again. I mean, the great guys always do.”

Verlander purposely didn’t watch the Astros during the 2021 season until they made it to October. He didn’t need to be immersed in competition as he would have in his younger years. Even his hours on the golf course were less peppered with frustration than they used to be, more fun than frenetic. Now, he says, he would love to somehow climb from his current total of 231 wins and reach that coveted 300 mark, though he knows time is working against him and losing nearly two full seasons to injury didn’t help.

“But I don’t need a big shiny medal at the end of the race to keep running,” Verlander said. “I’m just running because I enjoy running.”

“Well, sprinting,” he corrected himself. After all, just because he appreciates the chance to race more now doesn’t mean he can’t win.