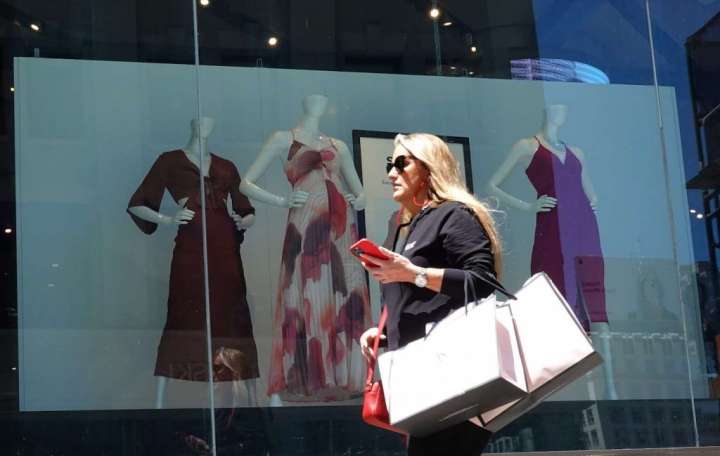 Retail sales jumped 0.9 percent in April, a sign that consumers are still spending despite rising prices, according to Commerce Department data released Tuesday.

The broad-based increase drew on a burst of activity at car dealerships, where sales jumped 2.2 percent. Gasoline sales fell 2.7 percent as pump prices eased from earlier highs, although they remain a whopping 37 percent higher than they were in April 2021. The Commerce Department also revised its March numbers higher, from 0.5 percent growth to 1.4 percent.

“The desire to spend is strong among U.S. consumers. … Americans have broken the shackles of covid and aren’t going back,” said Harris Financial Group managing partner Jamie Cox.

Inflation eased slightly in April, with prices rising 0.3 percent, compared with the previous month, according to the Bureau of Labor Statistics. But prices remain at a 40-year high after climbing 8.3 percent from a year ago.

The Federal Reserve has raised interest rates twice this year in a bid to cool off inflation, and five more hikes are expected. Rising rates have been a major drag on stocks markets this year, but the solid momentum in consumer spending suggests the economy can handle any bumps, analysts say.

“Numbers like this call into question any forecasts of a 2022 recession in the United States,” Cox said.

“The solid performance in the quarter is even more impressive as we were comparing against last year’s historic growth and faced a slower start to spring this year,” chief executive Tad Decker said in a news release.

Walmart saw its revenue increase 2.4 percent to $141.6 billion for the quarter, but the company’s favored measure of profit fell nearly 0.9 percent. Its adjusted earnings per share came in at $1.30, missing Wall Street’s expectations by 18 cents, according to Refinitiv data reported by CNBC.

Chief executive Doug McMillon said the results reflect the “unusual” business environment as the company has worked to navigate the economy’s pandemic-inflicted swings.

Walmart found itself overstaffed as the omicron variant of the coronavirus subsided in March and April, McMillon said. The company had hired more workers to compensate for covid-related absences, but those who were on leave came back sooner than anticipated. “It just took some time in March and April to get wage costs in line with sales,” McMillon told investors.

Fuel prices have been elevated for several weeks, after the Russian invasion of Ukraine sent oil prices soaring. On Tuesday, the U.S. average for a gallon of gas stood at a record $4.52 per gallon, according to AAA, which is more than $1.50 higher than it was a year ago.

And for the first time, AAA said, the average is at least $4 per gallon in every state.

Meanwhile, consumer sentiment slumped to its worst point in 11 years in early May, according to a widely followed survey from the University of Michigan.

“The April spending splurge is keeping the recession winds at bay for now, but for how long is the question,” said Chris Rupkey, chief economist at FWD Bonds. “Gasoline prices are going back up in May and that will likely hold back consumers from making discretionary purchases or a night out with fine-dining. Stay tuned.”