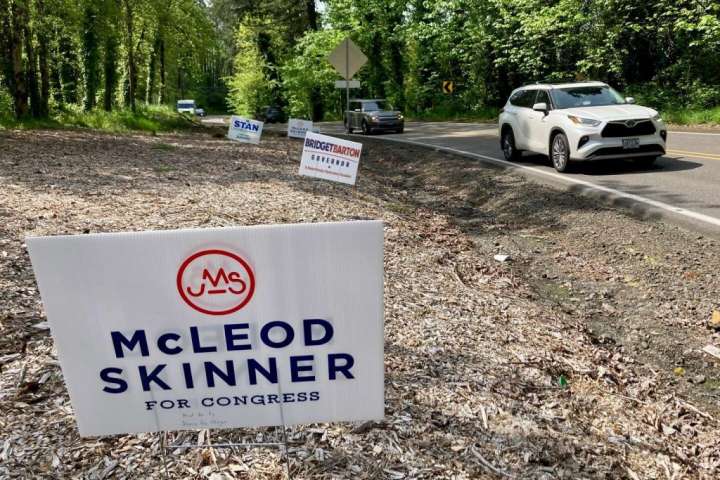 Some Democrats allied with the party’s more center-left wing won key primaries on Tuesday, but progressives appear to have come out on top in other races. That split decision is likely to heighten the increasingly tense divide between those camps in the party.

In their effort to move the Democratic Party left, progressive groups and politicians, such as Rep. Alexandria Ocasio-Cortez (D-N.Y.), often target primaries in Democratic-leaning areas, where whichever Democrat wins the primary will likely win the general election. That’s how Ocasio-Cortez and other members of the “Squad” got to Congress in the first place, after all.

To blunt the left, groups such as the Democratic Majority for Israel and Mainstream Democrats that favor more moderate policies are now also investing heavily in these primaries, effectively trying to prevent any more AOC-ish Democrats from being elected.

On Tuesday, there were four U.S. House primaries where the left wing and the center-left competed hard: two in North Carolina, one in Pennsylvania and one in Oregon. Each side appears to have won two races. Center-left-backed Valerie Foushee and Don Davis won the primaries in North Carolina. Meanwhile, it appears likely that progressive-backed Summer Lee in Pennsylvania and Jamie McLeod-Skinner in Oregon will win their primaries, though these races have not been called yet. (Center-left-backed Rep. Conor Lamb lost the Democratic Senate primary in Pennsylvania, but the winner, Lt. Gov. John Fetterman, is not firmly in the party’s left wing.)

Each of these races had their own individual dynamics, but looking at the results broadly, there is good news and bad news for both camps.

For progressives, any victory in a competitive primary is a major achievement. Progressive candidates are usually opposed by wealthy donors, business groups and incumbent Democratic politicians.

Lee, in particular, faced a barrage of negative ads funded by more centrist groups in the last weeks of the campaign. McLeod-Skinner was running against the preference of President Biden, who followed the traditional norms of party politics and endorsed the incumbent, Rep. Kurt Schrader.

And Lee and McLeod-Skinner both ran campaigns that suggested they had learned from the failures of past unsuccessful progressive campaigns, most notably Sanders’s 2016 and 2020 presidential runs.

But Lee is winning by less than 1 percent of the vote, a huge decline from the 25-point lead that she had in late March, according to a poll released by her campaign. The flood of spending from the center-left to help Steve Irwin nearly defeated Lee. A similar influx of campaign cash was likely a major factor in the victories of Davis and Foushee.

Rank-and-file Democratic voters are not totally aligned with the left ideologically, even in heavily blue areas. Most Democratic voters are not committed progressives or centrists — they are not that tuned in to the differences between the party’s factions. So a bunch of ads in favor of one candidate and bashing another can make a huge difference. So can endorsements from key Democratic leaders, such as the backing of Davis from G.K. Butterfield, the retiring congressman from the district.

And it’s not just the money and endorsements. Many left-wing Democratic candidates have criticized the party’s establishment in harsh ways in the past. But Democratic primary voters like the Democratic Party. Some of the anti-Lee advertisements prominently featured her past comments critiquing the party. That’s a big weakness of many progressive candidates.

Tuesday’s results leave both sides in an interesting position. The left has heavily invested in this primary strategy — trying to boost the broader progressive cause by getting charismatic, very liberal figures elected in races for city council, mayor, prosecutor, state legislative and the U.S. House in heavily Democratic-leaning areas. It’s hard to say that strategy isn’t getting results. Lee is likely to be a Squad-like member of the House. A victory of McLeod-Skinner over Schrader would suggest that the progressive wing can defeat incumbents who break with party orthodoxy too much, potentially keeping more conservative Democrats in line in the future.

But with the party’s centrist wing now really contesting those races, this primary strategy might no longer be viable, or at least not as viable as it once seemed. It wasn’t just Tuesday night that the center-left was winning many of these contests. More centrist Democrats won the mayoral races in Buffalo, Minneapolis and New York last year, and recently knocked off Nina Turner, a co-chair of Sen. Bernie Sanders’s 2020 presidential campaign who ran for a U.S. House seat in Ohio.

The party’s center has already blunted the left, and it has a lot of advantages in these intraparty fights. More centrist candidates are able to more easily and quickly get big funders on their side, because the left wing of the party is very antagonistic to the wealthy. And the left is also facing the power centers of the Democratic Party. Democratic leaders such as Biden and House Speaker Nancy Pelosi (Calif.) don’t generally weigh in on primaries, but when they do, they are backing the more-moderate candidate over the left-wing one. Many of the most powerful pollsters and consulting firms in the party are working on these campaigns against the left, which would not happen if Biden or Pelosi were strongly opposed to that.

Now this fight moves to other states. Next Tuesday is the runoff between Rep. Henry Cuellar of Texas, who has the backing of Pelosi and more centrist groups, against progressive-backed Jessica Cisneros. On June 7, San Francisco voters will decide if they are going to recall progressive prosecutor Chesa Boudin, as more centrist Democrats want.

The most important contest in American politics is, of course, between the Democrats and the Republicans. But the Democrats are having a far more interesting and consequential intraparty fight than the Republicans, who are increasingly all Trump-like. On the Democratic side, there is a real divide: Does the party want a few more AOCs, particularly in very blue areas, or more-traditional Democrats in basically every seat?