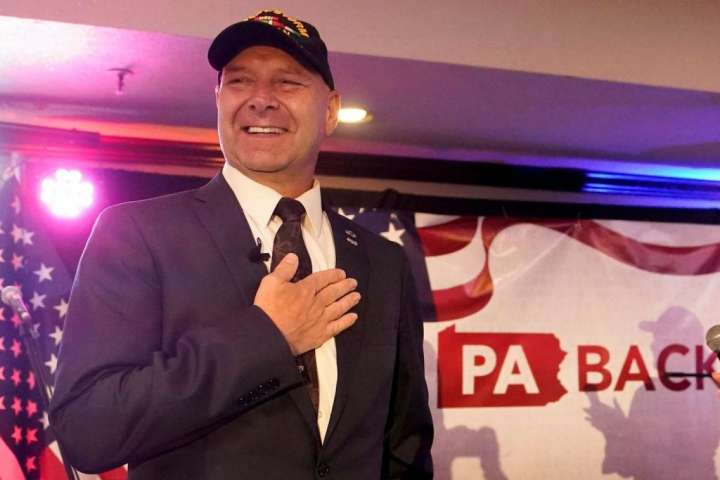 What matters most about Tuesday’s Republican primaries is not the scoresheet of how well candidates endorsed by former president Donald Trump did. What counts is how far to the right the GOP’s electorate has veered. This should scare everyone who lives outside the fever swamps.

The most important and frightening outcome is the decision of Pennsylvania’s Republicans — by a big margin — to make extremist state Sen. Doug Mastriano their party’s nominee for governor.

Mastriano is the fringe of the fringe. He is an ardent 2020 election denier — “insurrectionist,” my Post colleague Greg Sargent argues, is not too strong a word — who attended Trump’s rally that preceded the Jan. 6 riot, organized buses to take Pennsylvanians to it and wanted the state legislature to overturn the popular vote for electors committed to Joe Biden. He spoke at a QAnon event last month, at which conspiracy theorists presented him with a ceremonial weapon they called the “sword of David.”

Yes, democracy itself will be on the ballot this fall when Mastriano faces state Attorney General Josh Shapiro, the Democratic nominee. In a state where the governor appoints the secretary of state who oversees elections. Mastriano said he would “reset” the state’s voters rolls so everyone would “have to re-register.”

That this may be illegal does not deter Mastriano. He is so radical that Trump did not endorse him until three days before the primary, when polls showed he was likely to win. The latest returns showed Mastriano with 44 percent, to 20 percent for former congressman Lou Barletta, his nearest rival.

In the state’s marquee contest for the Republican U.S. Senate nomination, only a tiny fraction of the vote separates the Trump pick, celebrity doctor Mehmet Oz, and former hedge fund executive David McCormick.

McCormick, who served in the George W. Bush administration, tried desperately to recast himself in the Trumpian mold, but it sure looked fake. As the Wall Street Journal’s conservative columnist Gerard Baker wrote this week, “if he’s a genuine populist, I’m the patriarch of Constantinople.”

The fact the race was so close reflected the strength of rival candidate Kathy Barnette, a conservative media personality who campaigned extensively with Mastriano. Barnette, an authentic radical right voice, won a quarter of the vote, roughly seven points behind the two leaders, and likely took more votes from Oz than from McCormick.

It is delicious, by the way, that the GOP primary may be decided by those mail-in ballots that Trump so despises. “Here we go again,” Trump posted on his social media platform on Wednesday. “It is a BIG MESS.” For the GOP, it is.

Not for nothing did President Biden’s statement warmly endorsing Lt. Gov. John Fetterman, the landslide Senate Democratic primary winner, refer to the GOP contest as “a malicious, chaotic primary campaign to be the most extreme.”

“Whoever emerges” as Fetterman’s opponent, Biden added, “will be too dangerous, too craven, and too extreme to represent Pennsylvania in the United States Senate.”

Biden’s statement was a welcome sign that he and Democrats may be embracing the idea that the most important issue on November’s ballot — in Pennsylvania, but also nationally — will be the extremism that has seized the Republican Party. Trumpism is metastasizing.

As my Post colleague Dana Milbank reported this week, a new study has found that 1 in 5 Republican state legislators are affiliated with far-right groups. Ideologies that were once marginal and beyond the pale are now so important in the GOP that establishmentarians (hedge fund managers even!) have to give them respectful attention.

Those looking for positive signs pointing to a bit of Republican independence will be eager to point out that Trump’s endorsement does not guarantee victory. Trump-backed Rep. Ted Budd won the Senate nomination in North Carolina by more than a 2-to-1 margin over a former governor, but didn’t Rep. Madison Cawthorn, another Trump favorite, lose? Well, sure, but Cawthorn was burdened with so many scandals you could barely keep track of them — and he was defeated by less than two percentage points.

Republican voters in Nebraska last week and in Idaho on Tuesday declined to entrust their party’s gubernatorial nominations to Trump favorites, but both were extremely weak candidates.

The bottom line is that Trump was strong enough to drag the unlikely Oz candidacy close to the finish line — despite the split vote on the far right — and to clear the way for Budd. As important, non-Trump candidates of the McCormick stripe are forced to demean themselves by claiming to honor a man who plainly despises them and to pretend allegiance to his worldview.

And it underscores the virulence of the Trumpist contagion that a candidate such as Mastriano can win going away on the basis of a direct assault on democracy — even as a feckless GOP establishment proves itself powerless to stop a candidacy it knows is lethal. This is what voters need to ponder in November.

An earlier version of this column misspelled Gerard Baker’s name. This version has been updated.

The new Israeli coalition is not to blame for Palestinian violence

The ups and downs of the U.S. News & World Report rankings

A ‘Draft Raskin’ effort might be Democrats’ best shot in 2024