The Supreme Court search for a leaker springs its own leak 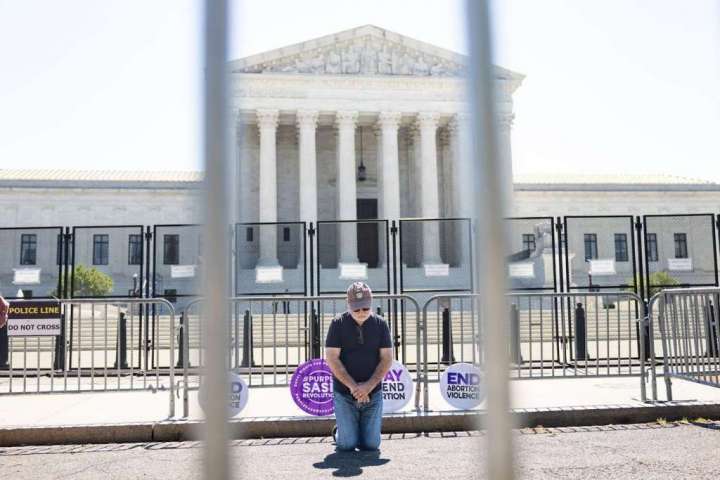 Frustrations appear to be mounting at the Supreme Court four weeks after Politico published a leaked draft opinion by Justice Samuel A. Alito Jr. which would overturn Roe v. Wade. As reported by CNN’s Joan Biskupic, officials at the high court are moving to “require law clerks to provide cell phone records and sign affidavits,” an alarming development that has prompted some clerks to consider lawyering up.

The scoop by Biskupic rests on “three sources with knowledge of the efforts” — meaning that the contours of the leak investigation are leaking. Chief Justice John G. Roberts Jr. announced that investigation, directed by Supreme Court Marshal Gail Curley, one day after Alito draft hit the Internet. “To the extent this betrayal of the confidences of the Court was intended to undermine the integrity of our operations, it will not succeed,” said a statement from Roberts.

Cellphones these days don’t observe boundaries, harboring data and information from people’s personal and professional lives. The invasiveness of the court’s digital pat-down, reports Biskupic, is unclear at this point. Given the implications of the probe, it’s no wonder that the clerks — each justice has a contingent of four — are “freaking out,” said CNN chief legal analyst Jeffrey Toobin.

The Supreme Court leak investigation doesn’t carry the consequences of the national security leaks that have made headlines over the years. Those commonly involve disclosures of classified information and constitute violations of federal law. The Supreme Court investigation, by contrast, appears to be confined to an employment matter; if outed, the leaker may lose his or her job and perhaps be subjected to blackballing in the legal community or, depending on ideological circumstance, hailed as a hero. There’s nothing classified, after all, about a Supreme Court draft document; it contains arguments, not revelations about confidential intel sources.

“If all they did was print it out and give it to Politico, there is no crime that is committed,” says Mark Zaid, a lawyer who has represented clients in government leak cases.

Phones are a logical starting point for those seeking to limit unsanctioned communications. During his eventful tenure as White House press secretary during the Trump administration, Sean Spicer grew concerned that staffers were leaking information, including plans to hire Republican operative Michael Dubke as communications director. So Spicer instituted random phone checks for his team members, news of which leaked quite promptly to Politico.

For another example of how leakers respond to anti-leaking efforts, dial back to the Trump-era State Department, which drafted a memo for then-Secretary of State Rex Tillerson on the perils of unauthorized disclosures. It promptly found its way to The Post.

Thanks to this dynamic, the quest to punish the Politico leaker may turn out to be the most-leaked-about thing the Supreme Court has done in some time.

In his statement, Roberts called the leak of the draft opinion “an affront to the Court and the community of public servants who work here.” Demanding a handover of cellphones, too, could prove to be an affront to the Supreme Court’s workforce. Biskupic reports that the investigative steps under consideration applies to clerks. But what about the justices themselves and administrative staff who may have had access to the material? “To be fair, they should ask all the justices for their personal cellphones,” says Zaid, who says that if he were a Supreme Court clerk, he would now be talking to fellow clerks about “why none of us should turn over our personal cellphone data to the government.”

After the draft opinion was published by Politico, commentators speculated on just who would run the risk of breaking the Supreme Court’s norm against disclosing the organization’s work product before it was released through long-standing procedure. Perhaps it was someone concerned that the conservative five-justice majority behind Alito’s draft was in danger of fraying — and the leak might serve to cement it. Perhaps it was someone who wanted to raise alarm on the left about the apparent demise of Roe.

Whatever the case, this has been a leaky time at the court. In addition to the original draft opinion, there have been additional, anonymously sourced stories on internal goings-on over the past few weeks, including Biskupic’s piece. Perhaps the investigation — along with any sanctions it may impose — will stifle the loose-lipped activity and return the court to its tradition of less astounding leaks.

Perhaps not, too. “Presumably, whoever did it — other than it being an accident or a very serious inadvertent mistake — one presumes it was motivated by very strong ideologies on either side,” says Zaid. “And if that’s the case, there’s nothing that’s going to stop that from happening again in the highly partisan, polarized environment that we’re in.”

N.C. newspaper continues coverage in the dark after substation attack

Miss Manners: Can I tell visiting relatives they’re in the way?