In Barre, Vt., granite is a way of life — and beyond 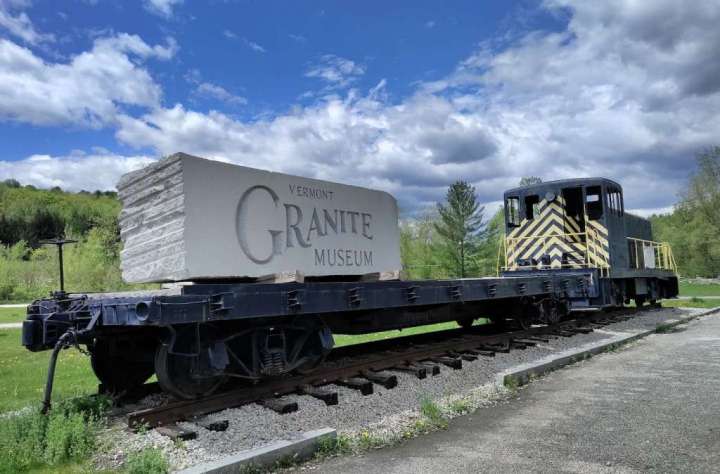 If one’s final earthly travel destination is a graveyard, then the penultimate stop might well be Barre, Vt., the self-proclaimed “granite center of the world.” Here, in the scenic foothills of the Green Mountains, are the quarries that produce many of America’s most sought-after tombstones.

Business is booming. The pandemic’s “excess mortality” has meant increased demand for quality granite to be quarried, then crafted into memorials. Moreover, as aging baby boomers realize they won’t live forever, they often embrace their own mortality by purchasing “pre-need memorials.”

Even if you don’t like the idea of picking your own tombstone, Barre (pronounced “Barry”) is worth a visit. You’ll gain an appreciation for what you may have previously taken for granted, or simply preferred not to contemplate — namely, gravestones. You’ll learn about their fascinating history, along with the remarkable industry and craft required in creating them. Most fundamentally, you’ll be exposed to the geological story behind the sturdy stone that carvers use to immortalize human transience.

In Vermont, a haven for dogs and the humans who love them

Although small (population less than 10,000), Barre is easy to find, just seven miles from the state capital of Montpelier. Signage for Exit 6 on Interstate 89 lets you know this is where the “Granite Quarries” are. You then might drive along Quarry Street or Stone Road on your way to a place called Graniteville. Along the way, you may pass the Cornerstone Pub & Kitchen, spot fence posts made out of granite and catch sight of what otherwise would be unremarkable commercial signs, such as for lawyers’ offices, engraved in granite.

Granite, granite, everywhere — highlighting the town’s economic raison d’etre and the stone artistry of its residents. In front of the public library stands a stone statue of Charles Dickens’s Mr. Pickwick. Another statue — of the poet Robert Burns, next to the Vermont History Center — was erected by the 19th-century Scottish masons who brought their stonecutting skills to Barre. On the other side of town is another, equally imposing statue personifying the Italian stonemasons who also brought their skills to Barre.

The European immigrants brought with them a tradition of organized labor, and Barre became the headquarters for the Quarry Workers’ International Union of North America. Still standing on Granite Street is the old Socialist Labor Party Hall, listed on the National Register of Historic Places in 2000.

Rock of Ages — not the hymn but a quarry company with a visitor center of the same name — is perhaps Barre’s single biggest tourist draw, typically attracting more than 100,000 visitors annually. In the fall, when the leaves turn colorful, attendance peaks. But in mid-May, on the very first day it opened for the summer season, my wife, Pat, and I were pleased to find not much of a crowd. In fact, ours was one of only three cars in the caravan that Roger, the tour guide, led from the visitor center to the huge Rock of Ages excavation site called the E.L. Smith Quarry.

Still, Roger jotted on an index card the number of cars and the number of occupants in each car, so he could be sure that he could account for everyone at tour’s end — that no one had fallen and vanished into the massive hole in the ground. Covering about 50 acres and almost 600 feet deep, it lays claim to being the world’s largest operating deep-hole quarry for dimension stone. (Crushed stone — gravel — is the product of other quarries.)

Now retired after having worked most of his life in the quarry, Roger knew whereof he spoke. He explained that the granite quarried here — known as “Barre Gray” — is known worldwide for its fine grain, even texture and superior weather resistance. Its unique proportions of quartz and feldspar (granite’s main ingredients) make it especially hard while also exceptionally receptive to intricate carving and sculpting.

The granite was formed as intrusive igneous rock approximately 350 million years ago. Called a pluton by geologists, the Barre granite formation is calculated to be four miles long, two miles wide and 10 miles deep. Based on what had been extracted since the Barre quarries began operation in the 19th century, Roger estimated that “it would take 4,500 years to extract all the granite.”

Things to do in Burlington

Perched on the quarry’s edge was a chain-link fence to prevent visitors like us from falling in. I had seen many quarries over the years, but nothing like this. As if guarding a precious artwork, the fence barrier seemed to make the scene that much more spectacular, even otherworldly. The quarry’s sheer sides, where blocks and slabs had been cut away, looked like a huge canvas of abstract art, with oxidized water stains dripping like paint. At the very bottom was a turquoise pool, this seemingly out-of-place color created by granite sediments and crystals in the water when slabs of rock are cut. Framing the scene in the far distance, the distinctive outline of Camel’s Hump, Vermont’s third-highest peak, punctuates the horizon.

About five miles away is the Vermont Granite Museum, housed in a renovated manufacturing shed that dates from the turn of the last century. Although massive (about 30,000 square feet), it was called a “shed” for its open layout and cathedral-like ceiling. Machinery to cut and move the granite blocks was powered by a dam and turbines on the nearby Stevens Branch of the Winooski River. A railroad spur, leading directly to the shed, could then transport the finished stonework. Today’s visitors are transported back in time through hands-on exhibits and collections of rock specimens and old tools, even industrial rollers made of granite.

Nearby Hope Cemetery showcases local granite and the artistry it spawned. Established in 1895, the 65-acre, parklike setting is a splendid example of the 19th-century garden cemetery movement, which favored burials in rural, nonsectarian settings. The coincident, ever-more-popular use of granite for tombstones and memorials created an outdoor museum of sculpture. The once-prevalent sandstone slates and marble headstones proved much less enduring than granite.

I’ve been called a tombstone tourist for past pilgrimages to the dead-celebrity-populated burial ground Père Lachaise in Paris and Cimitero Acattolico, the Roman cemetery where the poet John Keats’s gravestone famously reads, “Here lies One Whose Name was writ in Water.” But you don’t have to be a melancholic taphophile to appreciate the artistry on display in Hope Cemetery, such as a Pietà-like statue and realistic representations of violins and airplanes. It’s the “Uffizi of Necropolises,” in the words of Vermont folklorist Joseph A. Citro. All of the monuments are made of Barre Gray, and virtually all have been sculpted by Barre stonemasons — some for their own graves before they died.

For Pat and me, who had lost one old friend to covid-19, a lone granite memorial in Hope Cemetery seemed especially poignant. Erected on the centenary of the 1918 pandemic, it commemorated the many Barre residents who had died of the flu. They had suffered disproportionately because of their existing silicosis (called stonecutters’ disease) from inhaling granite dust while working in unventilated sheds.

Our visit to Barre was not all about death and granite, however. The trip easily included the Vermont fare of covered bridges, village greens, white church spires and maple syrup. Indeed, Pat insisted that we experience that quintessential summertime taste of the Green Mountain State: a frosty creemee. “What’s that?” I asked. The delicious answer came at the Morse Farm Maple Sugarworks: towering swirls of soft ice cream, especially creamy, served in a cup or cone, accented with a generous portion of maple syrup or straight maple sugar.

As granite is hard and enduring, a creemee is soft and ephemeral — a most harmonious balance.

Nicklin is a writer based in Virginia and Maine. Find him on Twitter: @RoadTripRedux.

Located in an old firehouse, this grill and pub’s wide-ranging menu offers steak, burgers, soups, salads, pizza, pasta and more than 25 appetizers. Open Tuesday through Saturday, 11 a.m. to 9 p.m. Hero sandwiches to honor firefighters from about $10.

Self-described as “Barre’s hometown bakery,” Delicate Decadence features an assortment of specialty coffees and fresh baked goods, such as cakes and croissants, as well as homemade soups and quiche for a light lunch. Open Monday through Friday, 8 a.m. to 6 p.m., and Saturday, 8 a.m. to 2 p.m. Open Sunday by appointment only.

Exhibits, photos and a video presentation provide an informative look into the quarrying and manufacturing processes. The visitor center includes a gift shop with natural stones mementos. An approximately 40-minute guided caravan tour to the nearby quarry is offered four times daily, Monday to Friday, May to October. Tours $7 per adult, $6.50 per person 62 and over, $4 per child 6 to 13, and children under 5 free.

Located in a granite manufacturing “shed,” the museum is listed on the National Register of Historic Places. Its purpose is to engage, educate and celebrate with the heritage and current accomplishments of Vermont’s granite industry. Open Tuesday through Saturday, 10 a.m. to 4 p.m., May to October. Admission $8 per adult, $6 per senior, $4 per child and $18 for families. Adult group rate $5; child group rate $3.

Art is at the heart of Marfa, Tex.

Stop to smell the roses in an unsung corner of Paris