Stop to smell the roses in an unsung corner of Paris 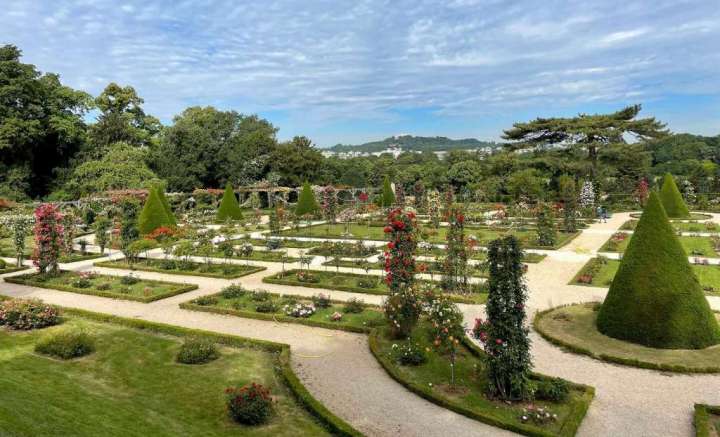 In Paris, it’s the season for rose sniffers. As the days lengthen toward the summer solstice, the city’s roses unfurl their petals in an exuberant palette: coral, apricot, wine-red, lavender, sunny yellow. The colors are irresistible, but it’s really the scent that gives them away. The unmistakable perfume wafts over the cityscape and, for a brief moment, disguises less savory urban odors, luring passersby to plunge their noses into the roses and inhale with gusto.

These blooms aren’t just found in the major gardens, such as the Jardin des Plantes and the Parc de Bercy, with their dedicated rose gardens. Roses climb up old stone walls, brighten small squares and even perfume the Roland Garros stadium, where the French Open tennis tournament is held. But the best place to admire the “queen of flowers” is the Parc de Bagatelle, a western wonderland abutting the Bois de Boulogne that’s remarkably untouristed. In fact, I first visited Bagatelle only after a decade of living in Paris, and the taxi driver — when I alighted at the Pont de Neuilly metro stop — had never heard of my destination. (He resorted to GPS to navigate the remainder of the distance, which was less than two miles.)

While tourists have returned in full force to Paris, with crowds thronging the major monuments in the city center, Bagatelle offers intriguing heritage, a chateau born of a bet with Marie Antoinette, and 59 acres of verdure about five miles from the Notre-Dame cathedral. Not to mention the riot of roses: One of four locations for the Paris Botanical Garden, Bagatelle is planted with 10,000 rose bushes representing 1,200 varieties. This oasis is so alluring that some rose rustlers have even been caught sneaking clippings.

It’s here in the classic rose garden where the International Competition for New Roses assembles a jury of experts — professional perfume “noses” and passionate enthusiasts — to judge new rose varieties in June. Established in 1907 as the world’s first such competition, it’s open to both amateur and professional breeders of noncommercialized roses. The competition has been canceled only once (during the Liberation of Paris in 1944), but coronavirus challenges meant adapting to virtual voting. Naturally, there’s a lot of excitement about the return of the in-person event. Alongside the garden’s strutting peacocks, the notebook-wielding jury members sniff and scope their way through the alleyways, the noses among them decrypting the precise litchi, citrus and clove notes of the flowers.

“Not only can breeders present their new varieties and see how they thrive here in Paris, but it’s also a showcase for the public to see the evolution of the rose: the new colors, the new shapes,” says Jean-Pierre Lelièvre, the head of horticulture for the Bois de Boulogne.

There’s a universal fascination with the rose. Laden with symbolism, it sprouts in literature and legend, including from Persian poets and bards of English literature. Indeed, the rose is rooted in the very soil of culture: It conjured divine paradise in the tombs of ancient Egypt; bloomed in ancient Greek legends; symbolizes “eternal spring” in China, where roses have been grown for 5,000 years; and represents the Virgin Mary for Catholics. The term “rosary,” explains novelist Alexander Chee in an essay of the same name, once meant rose garden in Middle English, and later became the term for prayer, associated with a “circlet of roses” offered to the Virgin Mary.

“Flowers are linked to our personal journey, from birth to death, and we’re instinctively drawn to the rose because it elicits emotions,” says Amy Kupec Larue, a garden guide and permanent jury member of the Bagatelle rose competition. “It’s a noble flower, elevated to a different category. You pick daisies. You cultivate roses.”

Undoubtedly, the allure is enhanced by the plant’s perfume and the memories grafted to our sense of smell. “In France, we have memories of roses in our parents’ gardens tied to the fragrance,” Lelièvre says. “The fact that these flowers give off an extraordinary scent contributes to their fame.”

Then there are the names, as poetic as the sagas behind them. Belle Hélène, York and Lancaster, Cuisse de Nymphe and — the oldest and perhaps most storied in France — the rose of Provins. It’s said that it was first brought back from the Crusades in the 13th century by Thibaud IV of Champagne, and — grown for perfume and medicinal remedies — contributed to the prosperity of Provins, now an immaculately preserved medieval town and UNESCO World Heritage site about an hour from Paris.

Can’t decide where to stay in Paris? A guide for every type of traveler.

But we really owe the French rose fad to a 19th-century trendsetter. Empress Joséphine Bonaparte amassed a collection of roses at the Château de Malmaison, about five miles west of Bagatelle, that awed visitors from all over the world. (On the bicentennial of her death in 2014, the chateau revived her garden of heirloom roses and introduced a new rose, “Souvenir de Joséphine.”) Roses were a part of Joséphine’s daily routine, perfuming her rooms and even adorning her dresses. Famously, she commissioned the painter-botanist Pierre-Joseph Redouté to illustrate a book of roses, a seminal work whose beautiful engravings remain in demand.

The origins of Bagatelle are linked to another rose fanatic, Queen Marie Antoinette. In 1777, she placed a bet with her brother-in-law the Count of Artois, who had recently acquired a country house in the woods between Versailles and Paris: Could he build a chateau worthy of a queen while the itinerant royal court traveled to the Château de Fontainebleau? Not about to lose the wager, the count enlisted about 900 workers and even confiscated building materials to complete it in just 64 days. The petite pleasure palace was designed for trysts and entertainment away from the nosy court, its neo-Palladian facade inscribed with the Latin phrase “Parva sed apta” (small but well designed).

The hedonism continued in the surrounding park, conceived by Scottish landscape designer Thomas Blaikie in the Anglo-Chinese style popular at the time. “Bagatelle was the era’s Disney, with surprises at every turn,” Kupec Larue says. “Boats ferried guests on man-made streams all over the gardens, past an island with a black marble mausoleum, reminding guests to ‘seize the day,’ given the fleeting nature of life.” Many of the 18th-century follies, including an Egyptian obelisk and teepees with servants dressed as Native Americans, have long since disappeared, although grottoes, waterfalls and a reproduction of the pagoda still enchant visitors.

Following the French Revolution, Bagatelle was transformed by Napoleon into a hunting lodge, then acquired in 1835 by an English aristocrat and art collector, Lord Seymour, Marquess of Hertford. In turn, his heir, Sir Richard Wallace, lived at Bagatelle, famously donating to Paris the water fountains that still bear his name. It was in 1905 that Jean-Claude Nicolas Forestier, the visionary landscape designer and curator of the Bois de Boulogne, persuaded the city of Paris to save Bagatelle from developers. (More recently, the chateau again came under threat, falling into ruin, until the Mansart Foundation launched a restoration fueled by private donations. The exterior was completed in spring, and now the interiors will be renovated to become a museum exhibiting 18th-century decorative arts and paintings.)

And so it was that Forestier restored the park, interspersing bulb-planted lawns with prized horticultural collections, including peonies, irises and waterlilies, along with the classic rose garden. To this aim, Forestier called on the leading rosarian of the day, Jules Gravereaux, a former executive at the Bon Marché department store who had designed Europe’s first modern roseraie, or rose garden, at his country house in a village south of Paris known today as L’Haÿ-les-Roses. On a quest to re-create Joséphine’s long-vanished collection, Gravereaux assembled so many varieties that he soon surpassed the empress, even traveling to the Balkans on his mission to showcase all known roses on the planet. Gravereaux’s donation of 1,500 varieties of roses, alongside his expertise, is what created the triumphant botanical masterpiece that now draws rose aficionados from all over the world.

In the name of the rose

“With so many different colors, flower shapes, scents, growth patterns and flowering periods, there is a rose for everyone,” Kupec Larue says, “and new ones are painstakingly created every year to be displayed and judged here.”

International breeders send their varieties before March 15 of the preceding year to be planted anonymously for the competition. The average is 100 entrants, with creations coming from countries on five continents, including from South Korea and the United States this year. In the spring following their installation, the jury begins to note the number of flowerings until the day of the verdict. The permanent commission (which accounts for 50 percent of the score) is assisted by a diverse grand jury of rosarians. Among the pre-pandemic habitues: Susan Daniel, the Italian opera singer, wearing a magnificent big hat; Patricia Laigneau, co-owner of the Château du Rivau in the Loire Valley; and Stephen Scanniello, curator of the Peggy Rockefeller Rose Garden at the New York Botanical Garden.

Alongside the grand prize announced at the Bagatelle Orangery, there are awards given for perfume and the best landscape rose. A secondary prize is given by journalists, another by children and another by the general public. There are four criteria for judging: the plant (30 points), the flower (30 points), the perfume (10 points), and resistance to disease and pests (30 points). The use of chemical pesticides is forbidden in Paris parks, thereby valorizing the plants that are naturally disease-resistant.

“It’s the time you spent on your rose that makes your rose so important,” wrote Antoine de Saint-Exupéry in “The Little Prince.” And each of these roses tells a story: of terroir, history and the people who cultivated them. A promenade through the Bagatelle roseraie is an invitation to contemplate the flowers bred for the pleasure and beauty of a garden, while admiring the novelty of horticultural creation. And why not make your own voice heard? The public is invited to assess the roses and cast their votes for the 2023 rose in the summer following the grand jury’s award for the 2022 rose.

“I think of Bagatelle as a sleeping beauty,” says Erik Benoit, one of the head gardeners. “We may be better known to foreigners than Parisians.”

As one of four sites for the Paris Botanical Garden, the Parc de Bagatelle preserves rich plant collections in thematic gardens. There’s a jewel-like chateau, rolling meadows planted with bulbs and water features designed with boulders, grottoes and waterfalls. Alongside the classic rose garden, where the International Competition for New Roses takes place, there is also a landscape rose garden. Open daily, 9:30 a.m. to 8 p.m., April to Sept. 30; earlier closure rest of the year. Admission about $3 per person April to Sept. 30. Park free the rest of the year.

In the garden of her country estate, Joséphine Bonaparte assembled a famous collection of roses. The heirloom rose garden was restored in 2014. The chateau museum showcases period furniture and a Napoleon exhibit. Open every day except Tuesday, 10 a.m. to 5:45 p.m. (6:15 p.m. on weekends), April to Sept. 30. Closed for lunch, 12:30 to 1:30 p.m. Entry about $7 per person.

Founded by Jules Gravereaux as the first garden dedicated to roses, the roseraie is situated just south of Paris. Open May 1 to Sept. 18. Daily from 10 a.m. to 7 p.m. Entry about $4 per adult; about $2 per person older than 60 and children 5 to 15.

Art is at the heart of Marfa, Tex.

In Barre, Vt., granite is a way of life — and beyond