Female scientists don’t get the credit they deserve. A study proves it. 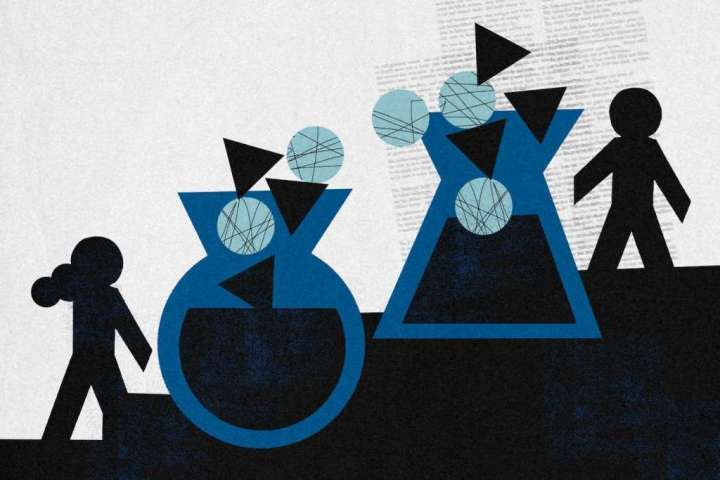 Female scientists are “significantly less likely” than men to be credited as authors on scholarly articles or named on patents to which they contribute — a systemic exclusion that probably has negative impacts on female scientists’ careers, according to a new study published in the journal Nature.

“These are pretty big gaps, and they’re incredibly persistent,” said co-author Britta Glennon, assistant professor of management at the University of Pennsylvania’s Wharton School of Business.

Why men get all the credit when they work with women

The findings — which come from an extensive data set and were confirmed by a survey and follow-up interviews — both partially explain and probably contribute to the underrepresentation of women in science, Glennon said: “If you’re seeing that you’re not getting credit for the work that you do, or even that your senior female colleagues aren’t getting credit for the work that they do, that’s pretty discouraging — so I think we would all be very surprised if there weren’t a significant impact on careers.”

Female scientists said as much in their written survey responses and interviews with the researchers, according to the study. “Being left off papers for which I was one of the two main leads has greatly damaged my career as a researcher and my chance to get promotion, jobs, and grant funding. I am still an academic but in a teaching role,” one woman said.

The data show that “women do occupy more junior positions than men” and that “the proportion of women in each position declines as the seniority of the position increases,” the study notes.

That may have something to do with the fact that, as the study notes, female scientists are less likely to be named on articles with more citations, which are more widely read and therefore carry more weight in the academic job market. In an article with 25 citations, for example, women are 20 percent less likely to be named as authors than men are.

“If you’re working on a project that looks like it’s going to be received really well, there’s more jockeying and competition to get on the authorship list — and basically what we find is that in those cases, it actually looks like women are less likely to end up on the authorship list,” said co-author Matthew Ross, an associate professor in the school of public policy and urban affairs and the department of economics at Northeastern University.

When women were included as authors, they reported making more contributions than men reported — carrying out tasks including conceptualization, data curation, writing the original draft, and reviewing and editing at higher rates, the survey found.

“Even just to become an author on a paper they’re doing more [than men],” Glennon said.

What do women want at work? It’s not just better pay, study finds.

The first was a data set focusing on more than 9,700 research teams composed of more than 128,800 researchers from 2013 to 2016, featuring funding and administrative data from the UMETRICS database — available through the University of Michigan’s Institute for Social Research — which the researchers analyzed alongside journal articles from the research engine Web of Science and patent data from the U.S. Patent and Trademark Office. Doing so allowed them to compare who was listed on grants and who was — or wasn’t — listed on the papers and patents funded by those grants.

The other two sources included a survey distributed to more than 2,400 published scientists that asked about their experiences being named or not named as co-authors, and qualitative responses from both written survey responses and several follow-up interviews. Neither the core survey questions nor the interviews asked about gender, the study notes, adding that scientists brought it up on their own.

The data set had limits: It did not collect the race of researchers, for example, Glennon and Ross said, nor did it explain the “mechanism” of the authorship disparities in any depth.

The survey suggests that “mechanism” of authorship exclusion boils down to “either discrimination or how contributions are perceived by collaborators, or both.” About 15 percent of female survey respondents cited discrimination or bias as the reason for their authorship exclusion, compared with about 7.7 percent of men. And about 17.5 percent of excluded women cited “differences in responsibilities” — as a result of personal/non-research reasons or leaving the lab — for the reason they were left off the author list, compared with about 12.6 percent of men.

Female scientists also pointed to other structural issues leading to authorship exclusion through their qualitative responses. They described having to advocate for themselves to be listed as an author or risk being excluded — but noted that “speaking up could backfire as well.”

And they complained of unclear and unfair rules about requirements for authorship, set mainly by male senior researchers.

Although data about scientists who are women of color was missing because of the lack of intersectional data collection in UMETRICS, the researchers collected race in their survey data: 11 percent of survey respondents self-identified as Hispanic/Latin/Spanish Origin women, and less than 1 percent self-identified as Black women. At least one female scientist noted in her response that women of color face additional barriers to authorship: “Most of my fellow academics (especially women, and most especially women of color) have been harmed by faculty who decide to award authorship to other lab members who did not do the work,” the participant wrote.

Christen Smith, founder of Cite Black Women, an initiative dedicated to supporting Black female academics and recognizing their scholarly work, said she believes the findings would have been “even more dire” for Black female scientists had the data included race. She pointed to another example of historically overlooked Black women in science — the mathematicians who helped NASA launch its space exploration program in the 1950s and 1960s — as proof.

“We need only look at a project like the film ‘Hidden Figures’ to know that there’s a way that Black women’s contributions to the sciences have been systematically erased over time,” said Smith, who is also an associate professor of anthropology and African and African diaspora studies at the University of Texas at Austin.

Creating more equitable systems of authorship requires that everyone involved — including research teams, journals and universities — adopt standards for how research contributors are both defined and acknowledged, the co-authors said. That could look like supplementing or replacing authorship bylines with contribution statements, or explanations of what each person contributed to the research, the co-authors said.

The power to create change, the co-authors said, also lies with the government entities that often fund scientific research — like the National Institutes of Health and the National Science Foundation — which can standardize requirements for acknowledging contributors, and with the principal investigators in charge of research projects, who can prioritize equity in their labs.

As Glennon said: “If you have a lab where you make people comfortable bringing these issues [of exclusion] up, that would ease a lot of the issues.”