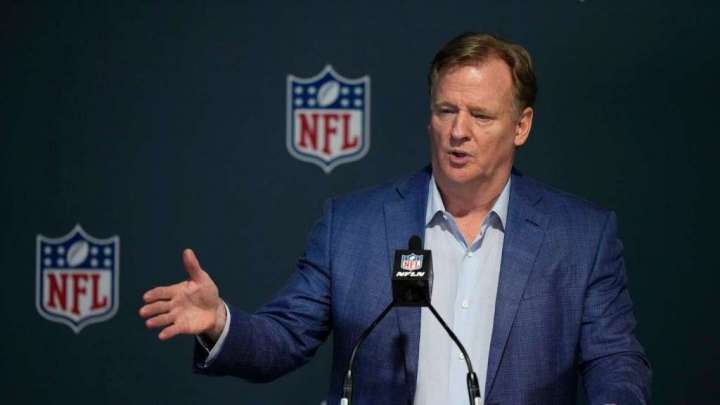 Washington Commanders owner Daniel Snyder will be in France, after refusing to participate. NFL Commissioner Roger Goodell will testify under oath remotely.

And the primary audience will watch via a live stream Wednesday as the House Committee on Oversight and Reform presents the preliminary findings of its eight-month investigation into allegations of misconduct within the Commanders’ workplace and the NFL’s handling of them.

The probe has included a review of more than 450,000 pages of documents related to a league-sponsored investigation into many of the allegations and multiple interviews with former employees and others who detailed their experiences.

The stated rationale behind the committee’s investigation is twofold: to shine a light on a highly visible NFL team as an example of how businesses can fail employees and to craft legislative reforms to benefit all working Americans.

“For more than two decades, Dan Snyder refused to protect the women who worked for him from the toxic culture he created,” Rep. Carolyn B. Maloney (D-N.Y.), chairwoman of the committee, said in an excerpt of her opening statement. “The NFL has also failed to protect these women. Now, I believe it is up to Congress to protect them and millions more like them.”

The evidence presented during Wednesday’s hearing at the Capitol is expected to address:

⋅ The Commanders’ alleged use of nondisclosure agreements to shield bad workplace behavior.

· Team executives’ alleged use of employees’ photos without their approval for private, prurient purposes.

· Snyder’s alleged efforts to intimidate former employees and perceived enemies via private investigators and the courts.

· The NFL’s role in setting and enforcing standards of conduct across the league.

· The NFL’s refusal to make public the findings of its 11-month investigation into the team, led by attorney Beth Wilkinson, which led to a $10 million fine of the team and Snyder stepping back from running its day-to-day affairs for an undetermined amount of time.

In a departure from most congressional hearings, this will feature only one witness: Goodell, who works on behalf of the owners of the 32 NFL franchises and, as such, often absorbs criticism from fans and media members in their stead.

In February, committee Democrats raised concerns about the existence of a “common interest agreement” they uncovered between the NFL and the Commanders, which suggested to some that the NFL could not conduct an independent investigation of the team.

But if such common interests exist between the team and the league, there have been signs of the relationship fraying in recent months.

When Snyder announced the team would investigate a new claim of sexual harassment against him, which was raised during a Feb. 3 congressional roundtable, Goodell quickly countered that the NFL would conduct the probe, appointed attorney Mary Jo White to lead it and pledged to make the findings public.

Also in February, when the committee issued an ultimatum for the production of documents related to the league’s first investigation of the team, the NFL informed the committee that the Commanders, not the league, were blocking access to many documents.

And Wednesday, Goodell will testify while Snyder will not.

Snyder has repeatedly refused the committee’s invitation, stating through his lawyer that he has a “long-standing business conflict” overseas on the only date proposed and has concerns about due process and fundamental fairness after the panel declined to provide him with information and assurances he sought. His conditions included a guarantee that all questions to him be restricted to the team’s “historic culture”; disclosure of the identities of all who spoke to the committee about him or the team; and the substance of their interviews.

While Maloney granted one accommodation — promising to share in advance any documents on which the panel would base questions — she rejected his other requests for special treatment as “highly unusual and inappropriate.”

Maloney urged Snyder to reconsider his refusal to testify in a six-page letter to his lawyer last week, stating she found no valid reason he could not.

On Monday, 48 hours before the hearing, Snyder’s lawyer reiterated his rationale for refusing yet left open the possibility of addressing the panel if his concerns were addressed.

According to a person with knowledge of the committee’s thinking, Snyder will not have the final word. The committee deems his testimony essential and is determined to secure it, ideally via compromise rather than subpoena, which Maloney has the authority to issue.

Wednesday’s hearing is not the first time a congressional committee has held a public hearing on matters of concern in sports.

In March 2005, the House Oversight Committee held a series of hearings on steroid use in Major League Baseball that included testimony from executives and players, including Mark McGwire, Sammy Sosa and Rafael Palmeiro.

In September 2021, the Senate Judiciary Committee held a hearing on the FBI’s role in investigating the serial sexual abuse of hundreds of young gymnasts by team doctor Larry Nassar, at which Simone Biles and several teammates offered wrenching testimony about being failed by the bureau, USA Gymnastics and the U.S. Olympic Committee.

While those congressional inquiries were marked by bipartisan support, the investigation of the Commanders and the NFL is riven by partisan divide.

In his opening statement Wednesday, Rep. James Comer (R-Ky.), the panel’s ranking member, is expected to renew his criticism of the committee’s Democratic leaders for undertaking an investigation he argues is outside its mission of protecting taxpayers from government fraud, waste and mismanagement.

“I urge the Chairwoman to get back to the core mission of the Oversight Committee and do what the American people elected us to do — conduct oversight over the federal government and the Biden administration, which is on a path to destroy America,” Comer said in an excerpt of his prepared remarks.

Maloney has argued that the probe is in the public interest. To that end, she introduced two bills last week — one to rein in the abuse of nondisclosure and nondisparagement agreements and another to create new protections for employees in all workplaces.

Mystics find their flow, knock off the WNBA’s top team in overtime