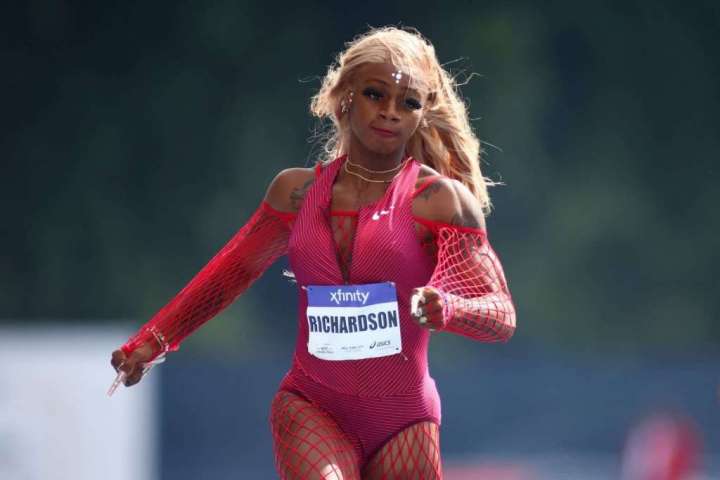 Seeking to represent the United States in an international event after losing her berth in the Olympics last year, Sha’Carri Richardson suffered a stunning setback Thursday at the U.S. track and field championships by failing to advance out of a preliminary heat in the 100 meters.

Richardson came in fifth with a time of 11.31, far slower than the 10.85 she posted earlier this month while finishing second overall in the 100 at a meet in New York.

Wow, in a mind blowing surprise at USA championships, Sha’Carri Richardson doesn’t advance to the semifinals in the womens 100m. Finishing 23 out of 31 runners. pic.twitter.com/TGPo63Mx9e

In Eugene, Ore., site of the domestic championships, top-three finishes in the finals assure athletes of a place on Team USA for the world championships. That event, also to be held at Eugene’s Hayward Field, will take place next month.

Richardson can still qualify for the worlds by finishing top three in the women’s 200 meters, the first round for which will unfold Saturday. She won the 200 at the New York meet in a time of 22.38.

At the U.S. Olympic trials last year, also staged in Eugene, Richardson ran the 100 in 10.86 to win the event and make herself a favorite to medal at the Tokyo games later that summer. After marijuana was detected in her system, however, her result was vacated and she received a one-month suspension that kept her from competing in the 100 at Tokyo. Richardson’s suspension ended in time for her to potentially participate in the 4×100 relay at the Olympics, but she was not selected for the U.S. team.

After missing Olympics, Sha’Carri Richardson remains in a lane of her own

After failing to advance Thursday in her 100 heat, Richardson hurried through the mixed zone and declined to speak with the media.

A 22-year-old from Dallas, Richardson attained instant stardom for both her performance at the Olympic trials and her striking persona, including a confident demeanor and an eye-catching look. She won the sympathy of many fans after explaining that she consumed marijuana to help cope with the devastating death of her mother. Two members of the House Oversight Committee, Reps. Jamie Raskin (D-Md.) and Alexandria Ocasio-Cortez (D-N.Y.), wrote a letter to major anti-doping agencies urging them to reconsider the rules and circumstances that led to Richardson’s suspension.

At the New York meet, Richardson proved to still be a very popular figure among fans.

“Don’t let the media, don’t let people, don’t let a company, try to stop you from shining, because you sunshine,” she told a group of young supporters there (per the Associated Press). “We are the light.”

Her runner-up finish in New York was her second in a row at a major event, following a similar showing in May at the Prefontaine Classic in Eugene. Richardson posted a time of 10.92 in that event but sprinting on the same track Thursday brought a far worse result.

Her time of 11.31 was the ninth-slowest out of a field of 31 who competed. Running the fastest in a time of 10.88 was Aleia Hobbs, a 26-year-old who was a member of the U.S.’s silver medal-winning 4×100 women’s squad in Tokyo. Sixteen competitors qualified Thursday for the semifinals of the women’s 100, which will be staged on Friday.