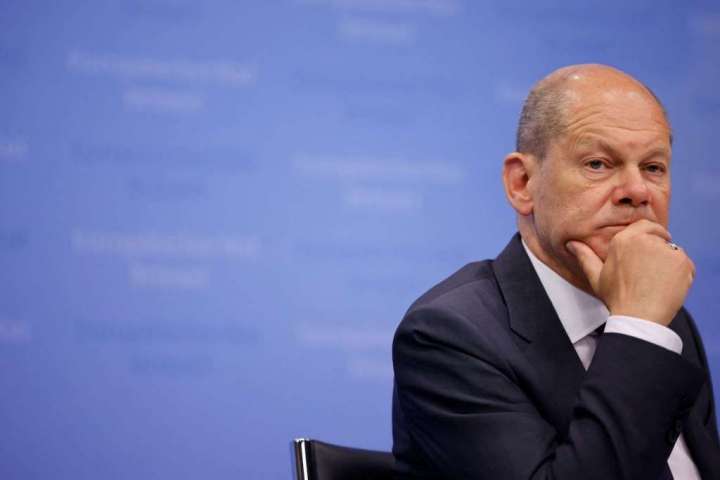 SCHLOSS ELMAU, Germany — As German Chancellor Olaf Scholz hosts his first major international summit this weekend, he is a leader with something to prove.

His first six months in office have come during perhaps the most tumultuous period in European history since World War II. And with it has come criticism that he is simply not up to the job.

Scholz has been lampooned as taking a dithering, confused stance as the war has unfolded in Ukraine, whose western border lies just 500 miles from the German capital. And he is dogged by accusations that he is dragging his feet on deliveries of heavy weapons to the Ukrainians.

As the meeting of Group of Seven leaders in the Bavarian Alps this weekend brings closer attention to Germany’s leadership role — or lack of it — Scholz and his party faithful have been attempting to turn around Germany’s public relations disaster.

“Great expectations are being placed on our country,” Scholz told the German parliament last week as he defended his government’s track record on weapons deliveries. “We are facing up to this responsibility.”

He spoke as the first heavy weapons delivered by Germany — seven self-propelled Panzerhaubitze 2000 howitzers — finally arrived in Ukraine and as the Defense Ministry, in an attempt to counter criticism, published a full list of completed and planned deliveries.

But as the war enters a critical new phase, with Ukrainian forces steadily losing ground in the east, including the key city of Severodonetsk last week, there are still calls, from inside Scholz’s coalition and in the wider European Union, that he act with more urgency.

Officials and observers have puzzled over just what it is that’s holding the chancellor back. The remnants of the old Ostpolitik of the Social Democrats, based on detente with Russia? The sometimes achingly slow German bureaucracy? Or is it a chancellor who is simultaneously stubborn about sticking to his guns and extremely cautious?

Some have compared him to a donkey: When you try to pull him in one direction, he only digs his heels in.

“Understanding Olaf Scholz is a science in itself,” journalist Georg Ismar wrote for Germany’s Tagesspiegel newspaper. Ismar described the chancellor as “bockig,” which means obstinate or bullheaded. He gave the example of the lead-up to Russia’s invasion, when Scholz would not let the words “Nord Stream 2” pass his lips, amid a clamor of questions over what he was going to do about the natural gas pipeline from Russia.

Scholz has similarly refused to answer directly whether he wants Ukraine to win the war, and for weeks he refused Ukrainian President Volodymyr Zelensky’s invitation to Kyiv amid a spat over the withdrawal of an invitation for Germany’s president earlier in the year.

Marie-Agnes Strack-Zimmermann, head of the parliamentary defense committee and a member of the liberal Free Democrats, a junior partner in Scholz’s coalition government, called the drag on deliveries “a matter of will.”

At times seemingly exasperated, Scholz says he has overseen historic shifts for Germany as it grapples with the ramifications of Russia’s invasion. In a speech in February, Scholz declared a Zeitenwende, or turning point in history, announcing an injection of 100 billion euros ($106 billion) into defense. He soon decided to send arms to Ukraine. But Germany’s actions have lagged behind expectations.

“It’s not very nice when you travel around the world and have the feeling from other countries that they are thinking, ‘The Germans, they are not fast enough or doing enough,” Strack-Zimmermann said. “I think the world is waiting for us to provide some kind of military leadership.”

Given Germany’s history, that military leadership might have once been seen as undesirable. But now, she said, “the world is waiting for Germany.”

Scholz still appears uncomfortable with anything that might be seen as taking a lead militarily. He has focused instead on issues such as global food security and economic assistance. He has called for a Marshall Plan for reconstruction.

With even just delivering weapons into a conflict zone already unacceptable to the Social Democrats, Scholz has a desire to be “middle of the road,” said Jana Puglierin, head of the European Council on Foreign Relations’ Berlin office. “Not at the very back, not at the very front.”

But his critics argue that arms are the most important factor. Jens Plötner, the chancellor’s top foreign policy adviser, might have offered a clue to his reluctance last week at the German Council on Foreign Relations in Berlin. He bristled at press focus on why Berlin is not sending more equipment to Ukraine.

“You can fill many newspaper pages with 20 Marders,” infantry fighting vehicles that are said to be ready to dispatch, Plötner said. “But larger articles about what our relationship with Russia will actually look like in the future are quite a bit less frequent. And that’s a question that is at least as exciting and relevant to discuss and where there could also be a public discourse first.”

Others contend the chancellor is himself part of the old guard that is having difficulty recalibrating his Russia stance.

“The resounding sentiment across the coalition is that the problem is in the chancellery: It’s the fulcrum of the German government’s extremely ineffectual response to the crisis,” said Jessica Berlin, a visiting fellow at the German Marshall Fund’s Berlin office. “The brakes are in the chancellery. Germany can’t just float through its foreign policy riding on the tails of the United States and the rest of the NATO alliance without making any decisions for itself.”

Frustrated lawmakers have strategized the best way to increase the pressure on the chancellor — from motions in the Bundestag to raising the heat in the press and through overseas partners.

“There are people in parliament who are exhausted,” said one Green parliamentarian, who spoke on the conditions of anonymity to criticize the government openly. “We have a clear demand from parliament to support Ukraine with heavy weapons. The problem is these deliveries are not being made.”

Russia targeted Ukrainian ammunition to weaken Kyiv on the battlefield

Friedrich Merz, the leader of the opposition, forwarded a parliamentary motion last week calling on the government to comply with a parliamentary vote in April that supported the delivery of heavy arms.

“Instead of dedicating oneself to the humanitarian imperative, to fully support Ukraine against the Russian war of annihilation, Germany is isolating itself with its reluctance to deliver heavy weapons among its partners in NATO and the European Union,” the motion read. “In doing so, the Federal Government risks irreparably damaging Germany’s reputation, especially among our eastern neighbors and friends.”

More forthright language from the chancellery in recent weeks, and Scholz’s visit to Ukraine alongside his French, Italian and Romanian counterparts, has raised some hope that he might begin to act with more authority, one U.S. official said. “But part of the problem is content,” he said. “You can change the way you are communicating as much as you want, but it has to be followed up with action.”

There is a feeling that Germany is in a different place from its allies on deliveries. Ukraine’s friends are looking to supply weapons that can be of most strategic use as the country loses scores of soldiers every day under Russian bombardment. The government still appears to be trying to calculate whether some military equipment might provoke Russia more than other types.

In France, Germany’s most important partner in the E.U., Scholz’s response to the war in Ukraine has prompted mixed reactions. “France has been quite impressed by the historic decisions taken by Germany, notably in terms of increasing its defense budget, delivering weapons to Ukraine, and accepting to close Nord Stream 2,” said Pierre Morcos, a French visiting fellow at the D.C.-based Center for Strategic and International Studies.

In the days immediately after Russia’s invasion of Ukraine, when Scholz announced a major increase in German defense spending, France’s Le Monde newspaper saw a “revolution” in the making. But the tone shifted in the following weeks. “Clearly, Germany has taken quite dramatic steps in the conflict,” Morcos said. But the country is “not necessarily playing the driving role we were expecting.”

For Scholz, the summit at Schloss Elmau, nestled in the dramatic peaks of the Bavarian Alps, will inevitably bring comparisons to his predecessor. It was the castle where in 2015 then-Chancellor Angela Merkel hosted Germany’s last G-7 summit. It was the first as a G-7 and not a G-8, with Russian President Vladimir Putin disinvited due to his initial assault on Ukraine and annexation of Crimea.

While Merkel’s soft Russia policy has cast a shadow over her legacy, too, Europe is suffering from a vacuum in leadership, said Puglierin, with the European Council on Foreign Relations.

“Traditionally, Germany’s role was actually always to bind the different voices together,” she said. But its policy now is “just not decisive enough for most people.”

That sentiment has been expressed in Brussels. An E.U. diplomat, speaking on the condition of anonymity to describe private conversations, said the past four months have hurt the country’s standing within the bloc.

“Decisions were made late. They were reluctant on sanctions. And in the whole process they have just not been the biggest cheerleaders for helping Ukraine,” the diplomat said.

While there is sympathy that Scholz is new and “finding his way,” the diplomat said, the fact remains “that they were one of the most reluctant countries,” they said.

Guinan-Bank reported from Berlin. Emily Rauhala in Brussels contributed to this report.