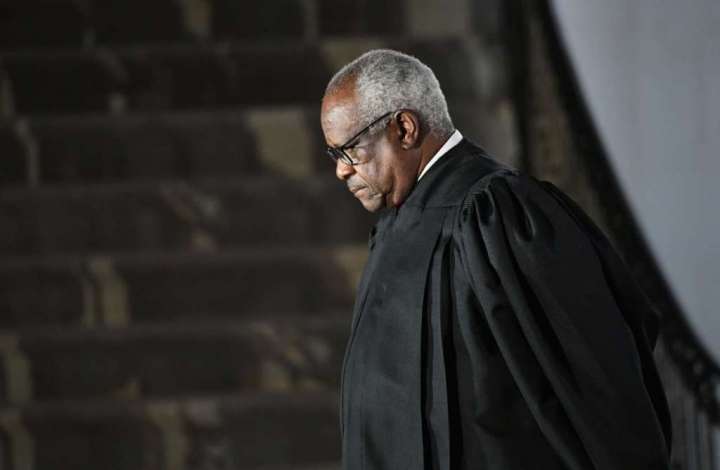 As much of a revolution in American life as the Supreme Court unleashed with its decision to eliminate constitutional protection for abortion, the conservative majority’s action looks mild compared with the position staked out by its most conservative member. Justice Clarence Thomas used the moment of overruling Roe v. Wade to urge the court to go further and jettison the entire line of privacy precedents that shield access to contraception, private sexual conduct and same-sex marriage.

Thomas called for the court to abandon its reliance on what’s known as “substantive due process.” This is the notion that the 14th Amendment guarantee against depriving individuals of liberty without due process of law encompasses a right to privacy, among other protections.

“Substantive due process … has harmed our country in many ways,” Thomas wrote. “Accordingly, we should eliminate it from our jurisprudence at the earliest opportunity.”

No justice joined Thomas in his call. So it is tempting to dismiss Thomas’s solo musings — he has criticized substantive due process before, but never so forcefully — as the concurrence from crazytown.

After all, the majority opinion in Dobbs v. Jackson Women’s Health Organization — the opinion that Thomas himself signed on to — explicitly disavowed any such radical intention. “[W]e emphasize that our decision concerns the constitutional right to abortion and no other right,” Justice Samuel A. Alito Jr. wrote. “Nothing in this opinion should be understood to cast doubt on precedents that do not concern abortion.”

In his own separate concurrence, Justice Brett M. Kavanaugh echoed that point, with italics: “I emphasize what the Court today states: Overruling Roe does not mean the overruling of those precedents, and does not threaten or cast doubt on those precedents.”

So everyone should calm down? Yes — and no.

Yes, because nothing is going to happen right away. There isn’t some groundswell of activism, comparable to the antiabortion movement, to go after the right to contraception that the court set out in 1965 in Griswold v. Connecticut.

Even more controversial rulings than the contraception case — such as the court’s 2003 decision in Lawrence v. Texas that the Constitution prevents states from criminalizing private homosexual conduct or its 2015 declaration in Obergefell v. Hodges that it encompasses the right of gay individuals to marry the person of their choosing — haven’t created the kind of societal uproar that surrounds the abortion issue.

It is true the decision in Obergefell was 5 to 4; three current members of the court — Thomas, Alito and Chief Justice John G. Roberts Jr. dissented — and three conservative justices have since joined their ranks. Nonetheless, it is hard to imagine the court as currently constituted deciding the case the same way. It is also easy to imagine that the court — even the court that was willing to overrule the half-century-old, repeatedly reaffirmed abortion ruling — would shy away from creating the kind of societal chaos that would ensue from undoing tens of thousands of existing marriages.

But also, no — no one should rest easy. The substantive due process slope is way more slippery than the Dobbs majority acknowledges. It insists that abortion can be distinguished from other privacy precedents because it alone involves the “destruction” of potential life. Yet as the liberal dissenters in Dobbs pointed out, the majority’s argument against constitutional protection for the right to abortion — that there was no right to abortion recognized in the 19th century, when the 14th Amendment was ratified — applies with equal force to Griswold, Lawrence and Obergefell, among others.

“So if the majority is right in its legal analysis, all those decisions were wrong,” the dissenters noted. “And if that is true, it is impossible to understand (as a matter of logic and principle) how the majority can say that its opinion today does not threaten — does not even ‘undermine’ — any number of other constitutional rights.”

Thomas may be alone now, but who knows who will be willing to join him down the road? His envelope-pushing is more than doctrinal provocation — it has real-world consequences. It invites conservative activists to bring such challenges. Thanks to President Donald Trump, the lower federal courts are stocked with former Thomas clerks eager to take up the cause and push the law in that direction. What starts as an extreme, outlier view can migrate into the conservative mainstream.

“[L]aw often has a way of evolving without regard to original intentions — a way of actually following where logic leads, rather than tolerating hard-to-explain lines,” the dissenters observe. “[W]hatever today’s majority might say, one thing really does lead to another. We fervently hope that does not happen because of today’s decision. … But we cannot understand how anyone can be confident that today’s opinion will be the last of its kind.”

When you pull on a thread, an entire garment can unravel. Thomas would like to see that happen, and he is tugging, hard, at the fabric of constitutional law. Who knows what will be left when he is done.