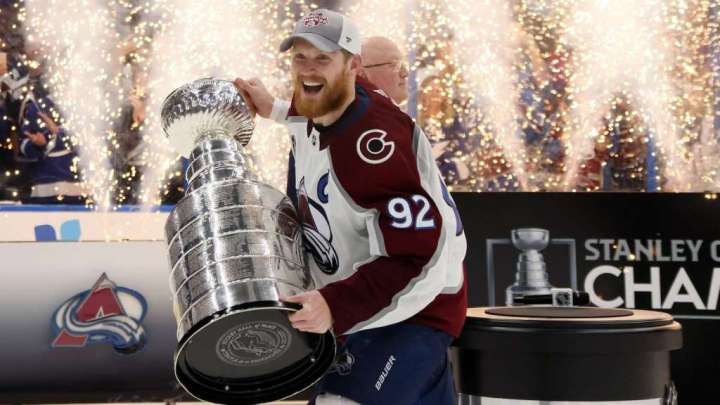 TAMPA — As the final seconds ticked off the clock, the players on the Colorado Avalanche bench streamed onto the ice in triumphant glee. Each had a different celebration in mind, but the majority headed to dog-pile goalie Darcy Kuemper. Star Nathan MacKinnon and defenseman Erik Johnson, the longest-tenured Avalanche player, embraced in an emphatic hug and fell to the ice in a giddy heap.

Following years of playoff disappointment, Colorado had reclaimed the Stanley Cup — and denied a powerhouse’s hopes of becoming a dynasty.

The Avalanche scored a 2-1 win over the mighty Tampa Bay Lightning in Game 6 of the Stanley Cup finals Sunday night at Amalie Arena behind goals from MacKinnon and Artturi Lehkonen, giving Colorado its first championship since 2001 and the third in franchise history.

“We didn’t want to sit back. We wanted to be aggressive. It wasn’t perfect, but when we needed a save, Darcy Kuemper stepped up and made it,” said captain Gabriel Landeskog, the first player to hoist the Stanley Cup.

Tampa Bay led less than four minutes into the first period, but Colorado rallied to dethrone the two-time defending champion. Lehkonen got the winner at 12:28 of the second.

The Lightning was looking to become the first team to win the Stanley Cup three straight seasons since the New York Islanders won four in a row from 1980 to 1983. But the dynamic Avalanche stole the spotlight over six games of an electric matchup highlighted by speed and skill.

Cale Makar, 23, won the Conn Smythe Trophy as playoff MVP after he notched eight goals and 21 assists in the postseason, anchoring Colorado’s blue line with unmatched offensive skill. Makar, who won the Norris Trophy as the NHL’s best defenseman last week, had 28 goals and 58 assists in a breakout regular season.

“I’m just so happy for all these guys, man,” Makar said. “… Everybody that’s been here for so long and worked so hard, to finally have that pay off with all the success we’ve had the past few years, it’s so amazing for them. I’m so proud of the boys, and I don’t know what else to say — it’s amazing.”

MacKinnon, one of the best players in the world, also was a driving force in the chase for the Stanley Cup. The 26-year-old had another tremendous regular season, recording 32 goals and 56 assists over 65 games in addition to his 13 goals in the postseason.

“It feels like disbelief. It’s crazy. Can’t wait to hug my family,” MacKinnon said. “Geez, it’s hard to describe. I didn’t really know what it’d be like to actually win it. Seeing all these warriors battle, it feels unbelievable.”

The Avalanche was unable to close out the series on its first try in a 3-2 Game 5 loss Friday in Denver, with the Lightning’s ­Ondrej Palat getting the game-winner late in the third period.

Lightning goaltender Andrei Vasilevskiy was excellent in Game 5 and continued his stout performance in Game 6, but Colorado was too much for him — and the Lightning’s defense — to handle. He had 28 saves. Kuemper maintained his composure in the tight game, making a handful of timely saves to finish with 22 for Colorado.

The first period was all Tampa Bay. Captain Steven Stamkos opened the scoring by beating Kuemper in front at 3:48 off a turnover by Makar.

MacKinnon tied the score early in the second with a one-timer from the left circle on a delayed penalty. It was MacKinnon’s second goal of the series — his first was off his skate in Game 4.

Lehkonen, who had hit the post earlier, gave the Avalanche a 2-1 lead with 7:32 left in the second off an odd-man rush with MacKinnon. It was the eighth goal of the postseason for Lehkonen, a pivotal trade deadline acquisition by General Manager Joe Sakic.

The Lightning tried to push for the tying goal in the third period but found few opportunities. Colorado played the kind of period expected of a team eager to end a series. Tampa Bay had just a few scoring chances, and Kuemper was there each time.

“This is a tough series,” forward Andrew Cogliano said. “… To beat them is probably a little more satisfying to be honest because they are champions. They know how to win. And, ultimately, when you can beat the champions, you know you really earned it.”

Colorado was one of the favorites to win the Stanley Cup at the start of the season but hadn’t advanced past the second round of the playoffs since 2002. In 2016-17, Colorado finished a distant last in the NHL, managing just 48 points. More recently, it had lost in the second round in three consecutive postseasons, raising questions about whether it would ever get over the hump.

“The best advice I ever got as a coach early on in my career was ‘Don’t be in a rush to climb the ladder,’ ” said Coach Jared Bednar, whose first season was the 48-point bottoming-out. “… When you find a fit, there is nothing like that in life. It makes your job easier and makes your job that much more rewarding to be around people that care.”

The Avalanche was dominant in the first round, beating the Nashville Predators with ease. Colorado’s toughest test was its second-round matchup with the St. Louis Blues. If not for Darren Helm’s game-winner with 5.6 seconds left in Game 6, the Avalanche could have faced a do-or-die Game 7. Colorado then swept the Edmonton Oilers in the Western Conference finals.

In the finals, the Avalanche looked like the better team during a 4-3 overtime Game 1 win and a 7-0 Game 2 rout. When the series flipped to Tampa for Games 3 and 4, the Lightning got redemption, throttling the Avalanche, 6-2, in a Game 3 beatdown. The series tilted back in Colorado’s favor in Game 4, with the Avalanche delivering a gut-punch 3-2 overtime win before the Lightning regained its footing to win a thrilling Game 5 in Denver.

Although the Lightning fell short of a three-peat, its accomplishments remain impressive. It reached the finals in three straight seasons, which hadn’t been accomplished since Edmonton did it from 1983 to 1985. Even though Tampa Bay had to replace major portions of its roster after winning its second straight title, it was still a composed, experienced group from top to bottom.

“Nothing we say now or do is going to make this feeling go away for a while,” Stamkos said. “But I’m proud of the guys.”

The Lightning had more experience than the younger Avalanche, which was out to prove itself on hockey’s biggest stage. Tampa Bay built a powerhouse, but it was Colorado’s turn for glory Sunday night.

“We always stuck to the plan, and this is the result,” forward Nazem Kadri said. “It’s an incredible feeling. It’s what I worked my whole life for, pretty much. To be in this position and to be remembered as a great team means the world.”