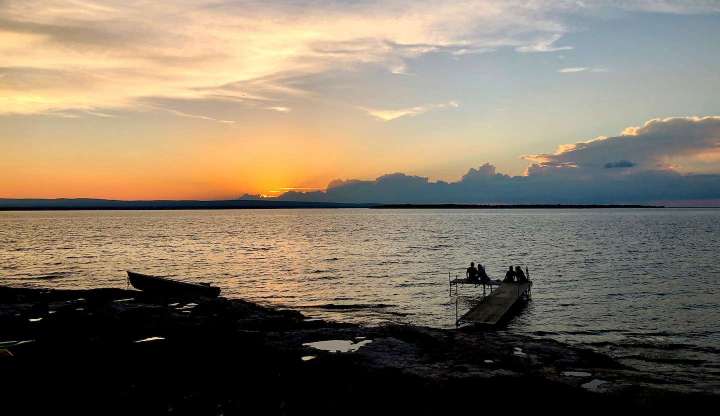 As I rhythmically dipped my kayak paddle into the rich green waters of Lake Champlain, my eyes scanned the horizon. I sighed. There was not much to see, except the reflection of the blue sky punctuated with cotton candy swooshes of cloud. A few boats moved in the distance, including the ferry traveling between Plattsburgh, N.Y., on the lake’s western shore and Grand Isle, Vt., just up the shoreline from where I was staying in South Hero, one of the main towns on the Lake Champlain Islands.

I squinted against the glare of the sun. Was that something rising out of the water near the shoreline?

My eyes found their focus. Nope, just a half-sunken tree.

I was disappointed. There was no sign of “Champ,” the legendary lake creature whose popular depictions make it look like a close relative of the Loch Ness Monster. Stories of a mythic beast living in the lake’s depths extend back to the Indigenous Iroquois and Abenaki people, although there have been plenty of sightings in the modern era, including by several people who captured their encounters. I had my iPhone at the ready, but today would not be the day I joined their ranks.

It was okay; I didn’t come to the islands for Champ. I came to enjoy the great outdoors and savor the small-town charm. Accessible by driving across a causeway from Vermont’s mainland on the eastern shore (only about a 30-minute trip from Burlington) or via the ferry from New York, the main islands (Grand Isle, North Hero and Isle La Motte) and a peninsula (Alburgh) cover more than 80 square miles of mostly farmland stretching as far north as the Canadian border. They’re bucolic bits of Vermont countryside, flat as a pancake and home to about 7,300 people, according to the 2020 Census.

Of course, the lake itself is a huge draw. In addition to kayaking, popular activities also include canoeing, sailing, paddleboarding, motor-boating and fishing. Publicly accessible beaches punctuate the shorelines. The best stretches of sand are at Grand Isle State Park, Knight Point State Park and Alburgh Dunes State Park.

The islands are linked by bridges and causeways, making it easy to get between them. We stayed at a private camp in South Hero, but accommodations abound, including charming waterfront and countryside rentals, small hotels and B&Bs.

The area is full of alfresco attractions to discover. One afternoon, I made my way to what’s known as the Birdhouse Forest in South Hero, the most quixotic public art on the Champlain Islands. The imaginative installation began as a matter of pragmatism, a creative collaboration between two neighbors hoping to lure mosquito-devouring swallows to this swampy stretch by building colorful birdhouses. About 25 years later, roughly 1,000 lodgings adorn the trees. Interspersed amid this whimsical woodland are several large-scale dinosaur statues, including a Tyrannosaurus rex and a triceratops. There’s no explanation offered for their inclusion, somehow making their presence even more magical.

Another memorable expedition was to Isle La Motte’s Goodsell Ridge Fossil Preserve, home to the roughly 460-million-year-old Chazy Fossil Reef. The 85-acre preserve features well-maintained pathways weaving through flower-punctuated meadows and scrubby thickets to exposed stretches of rock. Each of these discovery areas is marked with a sign indicating the fossils that can be viewed there, as well as some related scientific factoids.

Bring a store of patience on the self-guided tour; it can be challenging to spot the specimens on wide stretches of stone dotted with lichen, discolored by the elements and encroached on by plant life. This detective work is good for little ones, who are naturally closer to the ground and generally have razor-sharp vision. I spent roughly an hour meandering through the preserve looking for remnants of the first known species of coral, as well as trilobites and cephalopods, which felt like just the right amount of time.

Near the end of our trip, I woke early to hike a portion of the 14-mile Island Line Trail, a mix of gravel and paved paths extending from the Allen Point Access Area in South Hero down into Burlington, a route popular with cyclists and pedestrians. The highlight is the 10-foot-wide causeway stretching into Lake Champlain built with blast-hewn marble boulders that look like the remains of ancient Greek monuments. It was originally constructed in the late 19th century by the Rutland Railroad to create a passageway across the lake, but trains stopped using it in the 1960s, and it was eventually transformed into this trail.

There is a 200-foot gap in the causeway. Luckily, the Local Motion Bike Ferry offers what is perhaps the shortest ferry ride over to the other side. Peddlers and pedestrians are welcome, and it’s a fun way to get a unique perspective of the causeway, as well as the western sweep of the Adirondacks and the majestic Green Mountains to the east. The causeway also attracts fishing enthusiasts of all ages, who clamber down the rocky sides to toss in their lines, as well as birders reveling in the kaleidoscope of summertime species, including swallows, warblers, herons, osprey and ducks. As I strolled along, I enjoyed the cheery soundtrack of birdsong mixed with young anglers yelping excitedly, “I think I got one!”

By the end of my trek, my belly was grumbling for breakfast. I knew where I needed to go: Wally’s Place, South Hero’s ever-bustling bagelry-bakery-deli. No matter the earliness of the hour or the length of the line, the staff is all smiles and a paradigm of efficiency. I loved the breakfast sandwiches, especially the Montreal Smoked Meat packed with pastrami-like beef brisket, melted Swiss, a generous slather of grainy mustard and an egg. Lunch sandwiches are equally satiating, served on bagels or freshly baked bread.

If you want to go elsewhere for lunch, there are a couple of choice options. Up in North Hero, general store/gas station/post office/local hangout Hero’s Welcome on the waterfront serves up reasonably priced, lovingly made sandwiches. While you’re waiting for your order, browse the extensive gift emporium packed with gag gifts, kitchen wares, toys, personal-care items, books, souvenirs and more. If you don’t leave with at least a few random tchotchkes, you’re vacationing wrong.

Back in South Hero, the Hive Café at Allenholm Farm is a standout. The buzzy little eatery is rightfully renowned for its grilled cheeses — including one prepped with a zingy housemade rhubarb sauce — as well as a satiating smash burger and tacos. After you’ve finished, head into the farm market to pick up a cone or cup of maple creemee (essentially syrup-sweetened soft serve), which is even better with a shower of crunchy maple sprinkles on top.

If you’re making your own meals, skip the grocery store and load up on local produce, proteins and dairy at the Champlain Islands Farmers’ Market on Wednesdays in South Hero or Saturdays in Grand Isle, or stop at some of the many farm stands that dot the island. (Sandy Bottom Farm in Isle La Motte was a favorite of mine.)

You don’t come to the islands to shop, but there are a few spots worth exploring, namely in South Hero. Viva Marketplace is where I headed for thoughtfully selected souvenirs, as well as freshly made cider doughnuts and vibrant fruit pies cradled in flaky, buttery crusts. I was equally attracted to its hearty array of Champ-related merchandise. When I asked the owner, Heidi Tappan, why there was such an emphasis on these products, she told that me her family saw the famed monster back in 1988. Her father videotaped the creature, later appearing on “Unsolved Mysteries” to discuss the eerie encounter.

I felt an electric tingle run down my spine. I might not have seen the beast myself, but it was thrilling to speak with someone who had. Firsthand proof it was out there.

I headed back out to the car with a T-shirt emblazoned with Champ, a gift for my son. As I crunched across the gravel parking lot, I crossed my fingers. Maybe next time I was out on the lake, I’d have better luck.

Nestled on the shoreline, the dog-friendly inn offers guests the chance to unwind, swim, boat, bike, hike, fish and play tennis on 46 acres. Enjoy seasonally minded fare at its restaurant, the Lake Champlain Room. Rooms from $150 per night.

An ever-cheery staff puts out bagel sandwiches perfect for breakfast or lunch, as well as indulgent pastries, strong coffee and hearty breads. Open Tuesday to Sunday, 7 a.m. to 2 p.m.; closed Monday. Breakfast sandwiches from about $5.

This charming farm stand offers an outstanding rendition of the Vermont maple creemee, as well as its signature Brain Freeze, which swirls the ice cream into a cup of sweetly tart cider slushy.

Set up at Allenholm Farm, the food truck with a small, covered seating area crafts next-level grilled cheeses, burgers, tacos and other satisfying fare. Open Thursday to Tuesday, 11 a.m. to 6 p.m.; closed Wednesday. Dishes from about $4.

The cheery kitchen crew makes stellar sandwiches, which can be complemented with an array of snacks, treats, drinks and coffees. There’s also a gift emporium to explore. Deli open daily, 10:30 a.m. to 4 p.m. Sandwiches from $6.99.

Bike or hike the easygoing Island Line Trail to the end of a picturesque causeway to pick up this charming ferry traveling across a 200-foot gap to the other side, where you can head into Burlington for a meal or some shopping. The ferry’s daily schedule through Sept. 5 is 10 a.m. to 5 p.m. on weekdays and until 6 p.m. on weekends. Free with a $10 suggested donation for a round trip.

Take a self-guided tour of the Chazy Fossil Reef, where you can spot fossilized coral, trilobites and cephalopods. Open daily, dawn to dusk. Free.

Residing in jewelry designer Tish Chamberlain’s neat New England home, her jam-packed, artfully organized shop has something for everyone and all budgets. Open Monday, Wednesday, Friday and Saturday, 10 a.m. to 5 p.m. Call ahead to confirm hours for Sunday, Tuesday and Thursday.

These markets are worth visiting for the bounty of just-harvested produce, freshly laid eggs, local spirits and homespun foods. The weekend one is bigger, but both locations are worth visiting. Hours vary seasonally; check website for details. Summer market open at St. Rose of Lima Church through Sept. 14 on Wednesdays, 3 to 6 p.m., and at St. Joseph’s Church through Oct. 29 on Saturdays, 10 a.m. to 2 p.m.

Pro tips for finding a little space on vacation

Flying is a mess. Blame the airlines.

Ferry tales in the Pacific Northwest

In the Berkshires, smaller attractions pack a big punch