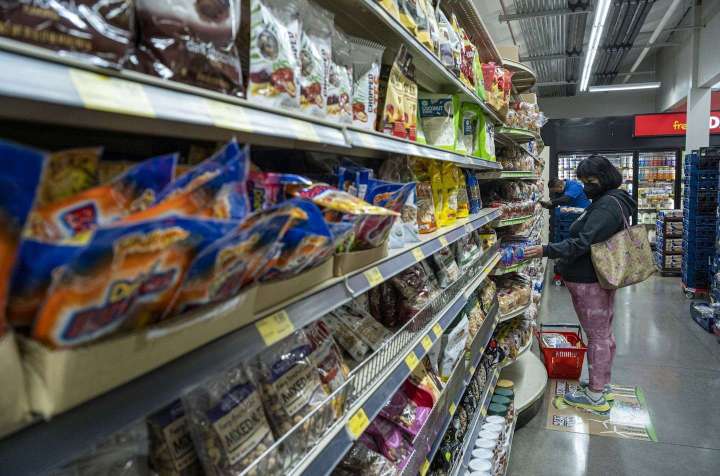 Overall consumer spending climbed 1.1 percent in June, the Bureau of Economic Analysis said Friday, a significant uptick from the 0.2 percent recorded in May. The BEA’s numbers show that consumers are still spending, albeit more strategically — cutting out unnecessary expenditures to afford fuel and food while inflation hovers at 40-year highs.

The numbers are in line with the Commerce Department’s report earlier this month that retail sales rose 1 percent in June, a rebound from the previous month’s 0.1 percent.

Because consumer spending accounts for two-thirds of the U.S. economy, policymakers and economists have been closely monitoring for signs of a cool-down. The Federal Reserve has been raising interest rates since March, in part, to help bring down prices.

Personal income in June increased 0.6 percent and the personal consumption expenditures price index — which accounts for the value on the goods and services — climbed 6.8 percent from the same time last year. That compares with the 6.3 percent increase recorded in May.

Neil Saunders, managing director of analytics company Global Data, said that while the while the 1.1 percent “looks robust,” it’s worth noting that it was driven by inflation.

“So, essentially Americans are having to spend more to buy the same amount of stuff,” Saunders said. “The increase in expenditure is also running well below the increase in income, which suggests that many households are having to dip into savings or take on debt to fund their spending.”

“We have already seem many discretionary categories, like apparel and electronics, slow down and today’s report suggests there could be a further slowdown on the cards,” he added.

Gas was the standout figure in the report’s spending breakdown, no surprise given that U.S. prices swelled to record highs in June, with the national average for a gallon of fuel breaching $5 for the first time. Spending surged nearly 49 percent that month, after rising 20 percent in May.

Spending on clothing and footwear evened out in June, which could be attributed to back-to-school shopping. Still, the BEA’s numbers show that consumers are spending the most on housing, utilities, food and medical care.

Counterintuitively, the report also shows that consumers spent more on recreational goods and vehicles. Spending jumped 1.3 percent in June, compared with the 0.2 percent decline registered in May. Motor vehicles and parts, which tumbled 53 percent in May, advanced 18 percent last month.

Mark Hamrick, senior economic analyst at Bankrate, said those numbers could be explained by supply and demand for both new and used vehicles over the past few months, in part thanks to shortages of semiconductor chips. The House on Thursday passed the $280 billion Chips and Science Act, which sets aside roughly $52 billion for domestic semiconductor manufacturing.

“Supply has yet to catch up for demand and might not until and if the semiconductor logjam is resolved,” Hamrick said. “Manufacturers have been raising prices, also in part, because of the increased complexity of technology associated with new vehicles. Over the horizon, the ability to raise prices may begin to wane, however, as more [electronic vehicles] come to market and if consumer demand weakens because of macro factors.”

On Wednesday, the central bank bumped up its benchmark rate by three-quarters of a percentage point — the fourth of seven expected increases this year — in an ongoing bid to contain inflation, which jumped 9.1 percent, year over year, in June. But there is also concern also that a more substantial consumer pullback could tip the economy into recession.

On Thursday, the BEA reported that gross domestic product fell for a second straight quarter, sliding at an annualized 0.9 percent from April to June. That follows the 1.6 percent decline in the three months ended March 31. Though six months of contraction is a typical indicator of a recession, the official determination is made by a panel of experts. Still, recessions aren’t typical when unemployment is near record lows.

Some categories showed signs of slower growth. Spending on food and beverages — which shot up 8.4 percent in May — advanced 3.6 percent in June, according to the BEA. Recreational services — such as concerts and sporting events tickets or gym memberships — also dropped, a sign that consumers may be retrenching to better afford necessities.

“Amid the mixes of high and sustained inflation, incomes and spending, consumers are clearly struggling,” Hamrick said. “Adjusted for inflation, spending is barely budging.

“With the savings rate slipping and at the lowest level in years, it is hard to see how consumers and households broadly can gain more traction or positive momentum. Ultimately, the salvation would be a broad decline in inflation,” he said.