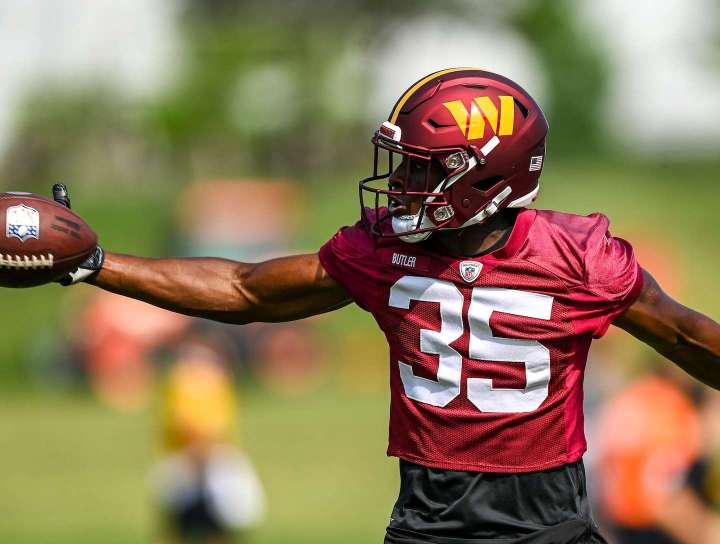 Shortly after he received a call from the Commanders on April 30 and learned they’d picked him in the fourth round of the NFL draft, Percy Butler’s phone rang again. This time, it was a familiar name.

Washington great Brian Mitchell was calling to check in on Butler and to tell him he has a friend and confidant should he ever need one in Ashburn.

Mitchell, the former NFL running back and Washington’s all-time leading returner, knew Butler’s path all too well. Both players starred at Plaquemine High in Louisiana. Both went on to play at the University of Louisiana at Lafayette (called the University of Southwestern Louisiana when Mitchell was there). Both were drafted by Washington. And to top it off, both became fathers just before their rookie NFL seasons.

Plaquemine, Louisiana, a town some 17 miles south of Baton Rouge, has only about 6,300 residents, according to the 2020 census. That’s less than a third of the total enrollment at Louisiana-Lafayette. So for Plaquemine to produce two NFL players who attended the same college and were drafted by the same NFL team is, well, unique.

Like many small towns, the community is close-knit, as evidenced by Mitchell’s longtime relationship with Butler’s grandfather, Tip Butler, whom the rookie safety has cited as one of his mentors. And though their relationship has been brief, Mitchell and Butler describe themselves as close friends due to their shared journey to the NFL.

“Once he got to my college, I started following him a lot, and then when Washington drafted him, I started thinking about that path,” Mitchell said.

The two never met when Butler was in high school, and they didn’t meet when he was at Louisiana-Lafayette. But Mitchell knew of Butler once he got to college, and since the draft, the two have had multiple conversations.

“We have a very good connection with people down South, especially from my hometown,” Mitchell said. “So I wanted to make sure he had someone he could lean on.”

Up until 11th grade, Butler was a multisport athlete, starring on the football field, the track and the baseball diamond. He technically played shortstop and center field for the Green Devils baseball team, but he humbly admits he played “the whole outfield.”

So it shouldn’t surprise, then, that some analysts, like Chris Simms, viewed Butler as the best “pure safety” in the 2022 draft class, with a long range in center field, a rare speed and an eagerness to hit.

Percy Butler’s life changed in a flash. Now he’s ready to get to work.

Butler’s ability to play safety and the nickel in subpackages drew Washington to the 22-year-old. And so far in training camp, he’s proven a standout in more ways than one.

During the first weeks, Butler was all over the field, deflecting and intercepting passes. His teammates, including the receivers who went against him, lauded him as a young player who has impressed.

“I want to prove that I can come in and learn, and I can play,” Butler said. “A lot of people were talking about special teams coming in. I can do everything at a high level.”

Defensive backs coach Chris Harris describes Butler as “football smart,” with the savvy to fully understand the game and be able to pick up the scheme quickly. He noted Butler’s speed (he ran a 4.36-second 40-yard dash at the NFL combine) and physicality, two traits the Commanders seek in their defense.

Butler also has the experience on special teams that the Commanders, like many NFL teams, covet. Special teams has often been a path onto 53-man rosters for younger players, especially those in crowded positions. Those like Hall of Fame running back Terrell Davis. Those like Super Bowl-winning cornerback Chris Harris Jr. And those like Mitchell, who was a fifth-round pick in 1990 — and a quarterback, no less — out of Louisiana.

Mitchell finished his career with at least 20 NFL records and is second all-time in yards gained, behind Jerry Rice.

His success, and the hometown connection, has fueled Butler even more.

“It definitely just made me want to go harder to put more history into it for Plaquemine,” Butler said.