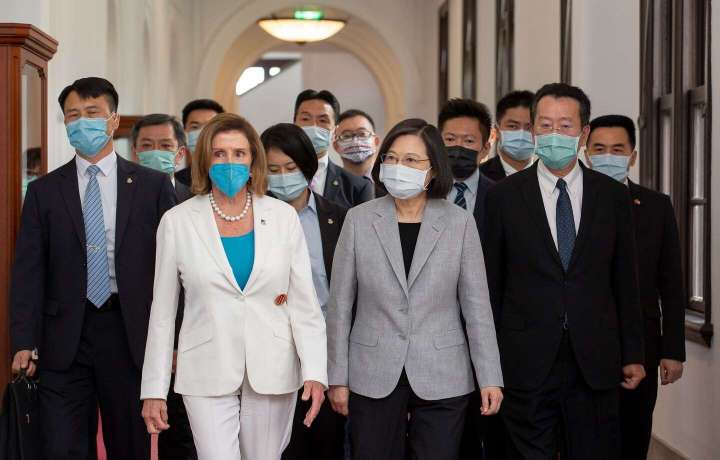 TAIPEI, Taiwan — House Speaker Nancy Pelosi met on Tuesday with prominent advocates for human rights in China while visiting the National Human Rights Museum in Taipei, after highlighting the stark contrast of Taiwan’s democratic reforms with the Chinese Communist Party’s intolerance for dissent.

The museum carries a collection of documents, oral histories and archives related to the White Terror — a nearly four-decade period of martial law that included suppression, violence and imprisonment by the Nationalist Party government (Kuomintang or KMT) against those perceived to be against its rule.

February marked the 75th anniversary of the Feb. 28, or 228, incident — a 1947 massacre in which the KMT killed up to 28,000 Taiwanese civilians following an attempted uprising led by those angered by exclusion from politics and business under Chinese Nationalist rule.

A 38-year period of martial law followed, which also brought silence over the massacre. As late as the 1980s, pro-democracy activism or calls for Taiwan’s formal independence led to arrests by KMT security agents, often under the guise of routing out Communists.

The tour involved a talk by Chen Chu, chairwoman of Taiwan’s Human Rights Council and president of the Control Yuan, the supervisory and auditory branch of government. She was a prominent political prisoner held and tried in the Jing-Mei detention center during a 1979 crackdown on democracy activists.

Made during the first trip to Taiwan by a U.S. House speaker in 25 years and amid loud opposition from Beijing, Pelosi’s tour of the facility was also an apparent dig at the Chinese Communist Party’s extensive efforts to suppress memory of dark periods in its history, as part of her long-running criticism of human rights abuses in China.

During the visit, she met with Wu’erkaixi, a former student leader of the 1989 Tiananmen Square protests, Lam Wing-Kee, a Hong Kong bookseller and publisher of text critical of the Chinese Communist Party, and Lee Ming-che, a Taiwanese activist who was released in April after five years in Chinese jail.

Global attention to Taiwan’s democracy and improving human rights record is a way to put the lie to China’s claims that multiparty liberal democracy isn’t suited to Chinese society, Lee said in an interview. “I hope the United States government, as a leader of global democracy, can take concrete action to support Taiwan to resist China’s military threat,” he said.

Lin Chuan-kai, a scholar at the Department of Sociology at the National Sun Yat-sen University who studies Taiwan’s White Terror era, said he was unhappy that the museum’s significance was reduced to a “simple demonstration of values” targeted at China, rather than a chance to further human rights in Taiwan.

“The focus of this visit was the CCP’s use of political violence to infringe on human rights,” he said, adding that the three people Pelosi met with were primarily involved in the struggle for human rights in China, not Taiwan.

In a tweet after the visit, Pelosi said she went to the museum as a “tribute to heroes who suffered & fought for Taiwan’s Democracy.” At a news conference earlier in the day, she said that one purpose of the trip was to show the world Taiwan’s “courage to change their own country to become more democratic” in strong contrast to the situation in China, especially Hong Kong.

The Chinese Communist Party’s security clampdown in the former British colony, using strict national security legislation to circumscribe freedom of speech and assembly, has highlighted Taiwan’s position as the last place in the Chinese-speaking world to host an annual commemoration of victims of the Tiananmen Square crackdown.

But human rights activists in Taiwan are often more concerned with redressing the trauma of Kuomintang martial law than with preserving the memory of events in China, reflecting a growing sense of Taiwanese identity among younger generations.

“A successful road to human rights for the people of Taiwan will not come because we proudly show Pelosi our report card and have it recognized by her,” said Lin, the National Sun Yat-sen University scholar.

Opened in 2018, the museum’s collections serve as a “reminder of the paths taken to reach the free and democratic society of Taiwan today,” its website notes. The aim of establishing it in a former detention center and military court in Taipei’s Jing-Mei district was “to avoid repeating the mistakes of the past and deepen the concepts of democracy and human rights in every individual mind.”

On a normal day, visitors can walk through the former prison, visiting cells and soldiers’ barracks, or listen to testimony from former inmates about being imprisoned and interrogated in telephone booths once used for visitors.

The Kuomintang first took control of Taiwan in 1945 after Japan surrendered to the Allies, ending 50 years of colonial rule in Taiwan. But the decades of KMT rule to follow — the Republic of China government fled to Taiwan in 1949 after losing the Chinese civil war to the Communists — were marred with periods of violence and political repression.

A process of democratization launched in 1987 and began a gradual reckoning with the past, led largely by the Democratic Progressive Party, which was formed from a group of writers, intellectuals and lawyers who challenged the Kuomintang rule.

In May this year, the Transitional Justice Commission concluded a four-year effort to investigate the actions of the Kuomintang from 1945 to 1992, which exonerated thousands of political prisoners from the time and recommended that symbols of authoritarianism be removed or relocated. (Many statues of KMT ruler Chiang Kai-shek, for example, have been placed in a single park.)

The creation of public commemoration spaces like the museum and the 228 Memorial Park in 1997 stand in stark contrast to the Chinese Communist Party’s efforts to strictly limit historical research or public discussion of past trauma from mass famine in the late 1950s caused by disastrous industrial policy and Mao Zedong’s tumultuous Cultural Revolution.

Wu’erkaixi, the former Tiananmen leader now based in Taipei, said in an interview that Pelosi’s visit to Taiwan is itself the biggest message that the United States is committed to standing up to Chinese autocracy, moving away from what he said was a wrong policy of ignoring China’s threats to democracy. “I urge the U.S. to right its wrong, come back and join Taiwan in defending human rights and democracy,” he said.