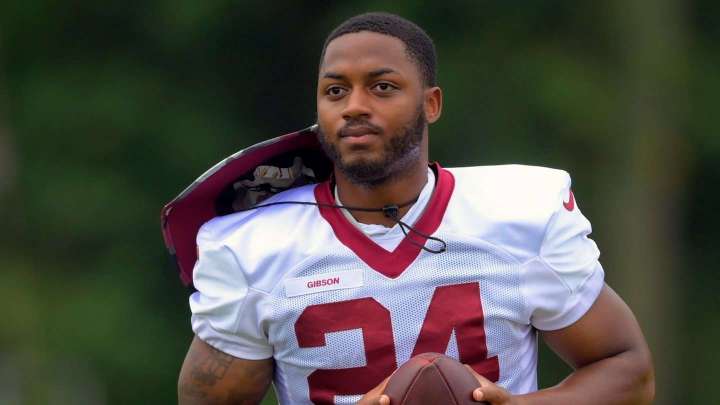 After a recent Commanders practice, Taylor Gibson teetered across the turf and scooped up a football, which was nearly as big as her head. Her father, Antonio Gibson, the dynamic Washington Commanders running back, stood nearby. Then Taylor, who’s 14 months old, hoisted the ball over her right shoulder and scampered down the field, briefly looking like her dad had at his best last year. But Gibson, playing defender, caught her in just a few steps.

“A.G., you got another big-play threat there,” a fan joked.

Gibson grinned, scooped up Taylor and carried her back to the sideline, where his mother, Annette Williams, awaited.

“You want to see Grandma?” Gibson asked, kissing Taylor’s cheek, handing her over and hustling back to the facility for another long afternoon of work.

In his third training camp, Gibson, 24, seems more mature, just like the offense he plays in. He looks leaner and more fluid, byproducts of a revamped diet, and his understanding of his adopted position has improved. That’s most apparent in the drills that showcase the finer details of the running back position, such as pass protection, and his shored-up skill set could allow offensive coordinator Scott Turner to use him with more versatility this year.

After playing most of last season at about 235 pounds, Gibson said in May that he wanted to arrive at camp weighing between 220 and 225 pounds. He didn’t accomplish his goal — the day before camp opened, he said he was still in the low 230s — but his body-fat percentage was down several points, and he remained confident his dedication to eating well and the rigors of camp would get him there by Week 1.

Antonio Gibson is healthy again, and Washington is putting the offense on his shoulders

Those around him, including Turner and running backs coach Randy Jordan, have been encouraged by the growth. Recently, Coach Ron Rivera said Gibson has done a “very nice job” in following the ramp-up plan the team set for him to help avoid the nagging injuries that have prevented him from reaching his ceiling in his first two seasons.

Williams has seen the roots of this transformation at her son’s home near the team’s facility, where he lives with his girlfriend and their daughter.

“[When he was younger], anytime [he] came into town, the thing to do was go hang out with the guys,” Williams said. “But now he stays home a little more with the kids. … He plays, he comes home, and he’s doing the daddy thing. [He’s] just maturing as a man. I can see it.”

A few Commanders, including Turner, said they believe the way he ended last season is one of the biggest reasons Gibson came into this offseason so focused. In Week 18, the running back — who’d battled multiple leg injuries and the impulse to try to make every play a big one — capped a gritty, workmanlike year with 146 yards and a touchdown, pushing his season totals to 258 carries for 1,037 yards.

“Touching that 1000-yard mark … I think it gives him a little confidence, a little boost of thinking, ‘Hey, I can do this, and I can perform at a very high level in this league,’” Turner said.

In the six-week break between minicamp and training camp this summer, Gibson said he worked with a meal-prep company off and on, but it was difficult to stay consistent as he traveled around the country. He spent a few weeks training in Southern California — first with teammates, including quarterback Carson Wentz, then on his own with Steve Calhoun of Armed and Dangerous Football — and then flew to the Florida panhandle for a vacation with friends. They rented a boat to go out to Crab Island, an underwater sandbar near Destin popular for its beautiful waters and floating bars.

“I actually got to drive the boat out there,” Gibson said. “Parked it, put the anchor down, did the whole little thing. It was smooth.”

Back in Virginia, Gibson said he settled into a routine of training, family time and video games, such as “Call of Duty,” NBA 2K and Madden. He was figuring out how to give himself what he needed, and though he made progress, it wasn’t always perfect. When he reported to camp, he had a minor hamstring injury, which he attributed to a lack of hydration.

“I blame that on myself,” he said. “Maybe [hydration is] what it was, maybe it wasn’t. But it happens. I’m feeling good now and looking forward to the future.”

This week, as he returned to drills, the growth in his game has been evident. He runs more aware of the down and distance, and in one-on-one blocking drills against linebackers, he holds up. As a rookie, Gibson said, he didn’t know any protections. It took him a while to catch up to the speed of a blitz, then a little longer to learn about disguises — like if defenders are stacked near the line of scrimmage, it usually indicates one of them is coming.

One day in 11-on-11, the defense blitzed, and Gibson slid to the free rusher at the perfect time.

“Good pickup!” Jordan shouted, and when Gibson ran back to the huddle, the running backs coach clapped him on the helmet.

Later that afternoon, a reporter asked Gibson what he thought was most different about his game this year. Gibson could’ve said something technical, like blocking or situational awareness or how he might figure into the team’s passing game. But he opted for a broader answer, one that encompasses his diet and home life.

“Just the confidence,” he said. “It’s Year 3. I feel like I got the reps that I needed these past two years. I made the mistakes that I have made, and I learned from them. I just feel confident going there. I’m relaxed out there. I know what I’m doing. So, it feels good. Feels real good.”