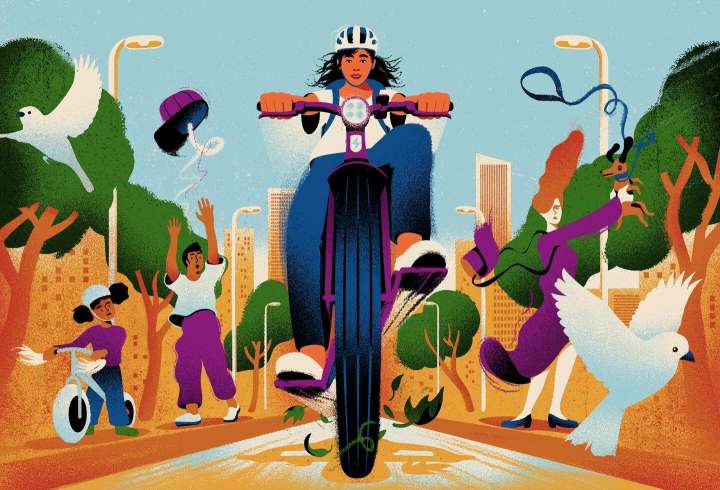 NEW YORK — In all her 36 years of living in Brooklyn’s historic neighborhood of Fort Greene, Maria Ferrari has encountered few things this unsettling.

Ferrari, 69, raised a family here; before she “semiretired” in 2020, she breathed a sigh of relief coming home to peaceful Fort Greene after grinding, grueling days in the soap-opera industry. “I think of Fort Greene as a village,” she says of her tree-lined, brownstone-dense haven. “We have everything we need, right here.” But twice now, she says, she’s narrowly avoided being struck down by cyclists ripping through on electric bikes.

The first time, the e-bike rider was going the wrong way on a one-way street, Ferrari says on a bench in the sprawling Fort Greene Park, with the sound of tennis balls whacking back and forth in the background. The second time, “I swear to God, he was in my face as he passed,” Ferrari adds, her hand six inches from her face. “And he went, ‘Sorry!’ as he zipped by. It’s like” — Ferrari scoffs — “ ‘You’re lucky I wasn’t even faster stepping into the street!’ ”

In the grander catalogue of neighborhood dangers, getting hit by an e-bike is far from the deadliest. Nor is the threat presented by e-bikes anywhere near the gravest one facing Americans when inflation is costing people their homes, children are in peril at school and — oh, right — the planet is also melting. Still, there are concerned Maria Ferraris in every Fort Greene in North America.

In Madison, Wis., elected officials enacted new regulations that arguably encouraged the use of electric bikes in 2019 — but noted that they’d heard grumbling from constituents about the juiced-up bikes barreling by them on trails. In Kent, Ohio, one resident wrote a letter to the editor of the news site the Portager in April to complain about e-bikes: “The idea of normalizing any vehicle zipping along any and all sidewalks, the Esplanade notwithstanding, on the KSU campus/Kent is a ticking time bomb,” he wrote. “Someone will get hurt.” In Toronto, a cyclist lamented the alleged lawlessness of e-bikers in a letter to a local magazine: “Some of them have zero regard for even the most basic rules of the road because they are nimble and can easily make a getaway. It’s chaotic.” On the beachside trails of San Clemente, Calif., e-bikes were banned entirely early this year.

While early pandemic-era hot commodities like pocket hand sanitizers and cloth masks have fallen by the wayside, e-bikes seem to be here to stay. They enjoyed a 145 percent sales boost during the long desperate-for-outdoor-activities months of 2020 and, according to the New York Times, outsold electric cars during that year at a rate of 2 to 1. As of November, e-bikes made up 20 percent of New York’s CitiBike rental fleet — but accounted for 35 percent of the rides.

Not everyone, though, is thrilled about this, and it’s not just the speed of e-bikers whizzing by — it’s the absence of law-following, law enforcement, even lawmaking regarding e-bike usage in their neighborhoods. For inventions that so convincingly point toward a utopian future, they’re sure getting a lot of people riled up.

The idea of bicycles powered by electricity dates back all the way to the 1890s, though some of the first ones recognizable as ancestors of today’s e-bikes emerged in the late 1980s. The term refers to bikes with pedals and any kind of electric motorization — ranging from a mild power boost that kicks in when pedaling to a battery pack and a throttle, the kind commonly used by delivery workers. Some can travel at speeds nearing 30 mph, and as a result, many riders consider them a cheaper, more environmentally friendly alternative to cars — plus they’re faster and less sweaty than regular bikes. The exercise benefits are a draw for many, especially those who may be unable to pedal a conventional bicycle but still want to get some cardio in. (This does not apply to electric scooters, ever-multiplying hordes of which have also been streaking by, albeit at lower speeds.)

E-bikes have also offered a greener — and faster — option for thriving food-delivery services. Jon Orcutt, advocacy director for Bike New York, started to see e-bikes proliferate in the city in the mid-2010s, “and it was because the delivery industry sort of led the way.”

And if more drivers would just switch to e-bikes, the logic goes, streets would be less clogged with automobiles and many big cities would become more livable.

E-bikes get up to speed in popularity, providing a workout easier on the heart

Many owners have become shout-it-from-the-rooftops e-bike evangelists. Scott McDermott, a 23-year-old resident of Newmarket, N.H., got an e-bike in mid-May. Immediately, his hilly 45-minute bike commute to the University of New Hampshire, where he works for the campus recreation department, began to take half the time. Exploring on his own time became more fun, too. “I live at the top of a hill,” he says. So leaving his house on an analog bike was great. Coming home, less so. “That made me not want to ever take my bike out.”

One of the only less-than-pleasant interactions McDermott has had, he says, came from a nonelectric bike rider, in full racing gear, who passed him in the bike lane. “He goes, ‘Look, I don’t even have a motor!’ ” (In general, there’s little observable friction between traditional cyclists and e-bikers, Orcutt says. “They’re the same community. A lot of longtime cyclists now use e-bikes.”)

Still, the push forward into a two-wheeled future has inevitably met resistance — especially from those who just want their cherished peaceful places to remain unbefouled.

For eight years, John Love, 77, was on the city council of Cherry Hills Village, Colo. — a stately suburb south of Denver, where Russell Wilson and Ciara areneighbors with John Elway and Peyton Manning. Now, he runs the town soup kitchen, as he has for 29 years.

One evening a week, Love goes walking on a crushed-gravel pedestrian and horse trail a half-mile from his home. It winds through meadows and some forested areas and “has a little pastoral quality to it,” Love says. But lately, e-bikes have been zooming past him, despite that fact that they aren’t allowed on the Cherry Hills segments of the trail. “You’re there for peace and quiet and you don’t get it.” Plus, e-bikes “can be more than a nuisance to horses. It can be upsetting and possibly dangerous.”

In Prospect Park, Brooklyn’s 526-acre communal backyard, 51-year-old video and audio producer Gideon Evans walks his family’s dog — a Carolina named George — on a short loop path about three times a week. E-bikes aren’t allowed inside park limits, but that hasn’t stopped riders from occasionally darting past Evans on the paved walkways, some of them cutting through the park on their way to deliver food. Earlier this year, he saw a delivery driver wipe out on the pavement. “He clearly didn’t know how to stop the e-bike,” Evans said. “He was fine, but I was sort of shocked that he didn’t even know how to operate it.”

Happily, many seem eager to alleviate the tensions between e-bikers and those who share the roads with them. The question is how.

Perhaps it’s a matter of better signage. Evans has seen many a biker blow right past the small, text-heavy signs indicating they’re prohibited in Prospect Park: “Those signs don’t convey any sense of urgency,” he says. “Some of these e-bike riders might not even realize they’re not allowed.”

Or perhaps it’s a matter of better enforcement. As Orcutt notes, in many places, local laws haven’t kept up with the proliferation of different types of electric bike. So it’s understandable, he says, “for the police not to know all the nuances” quite yet.

Or it could be a matter of better education. Ferrari believes e-bike riders need more training in local bike and road laws, though she’s not sure how the city or state might practically implement such a thing: “I’m not gonna say all of them, but many of them just think they have the right of way all the time,” she says.

Ukrainian fighters take to electric bikes in the war against Russia

Of course, in any neighborhood in America where residents pay dearly for peace and quiet, opposition to anything fast, loud or ugly is a tradition. When Orcutt moved to New York in the 1980s, he remembers with a laugh, one columnist for an Upper East Side community newspaper was always doggedly complaining about bicycles — the nonelectric kind — zipping through the neighborhood at alarming speeds.

And drivers and pedestrians have always squabbled over how to share the roads with two-wheelers. “As Americans, we’re conditioned to walk up to the curb and look for cars, and listen for cars,” Orcutt says. “Bikes don’t necessarily trigger that sixth sense.” E-bikes further complicate the situation: They’re bikes with a tiny bit of car in their DNA. In time, though, perhaps people will have honed that reflex, too.

So maybe it’s just a matter of patience. “There hasn’t been enough of a decrease in cars to make it feel like a better situation, having these e-bikes,” Evans says. But maybe someday e-bikes will make a dent — even if a credit of up to $900 for purchasing one just got dropped from congressional Democrats’ buzzy new climate deal.

Indeed, even Ferrari sees the appeal of the future e-bikes seem to promise. The two kids she raised in Fort Greene are adults now, living in other areas of the borough. Today, she says, “I see all these cargo e-bikes, and I think, ‘Damn! If these were around when my kids were little, I might have considered buying one.’ ”

My teen says they’re nonbinary. How do we know it isn’t a phase?

Carolyn Hax: Mother-in-law insists they’re moving away because they ‘hate’ her

Miss Manners: Why do we call pets ‘babies’ and pet owners ‘parents’?

Ask Amy: Now that I’m married, I miss living with my family