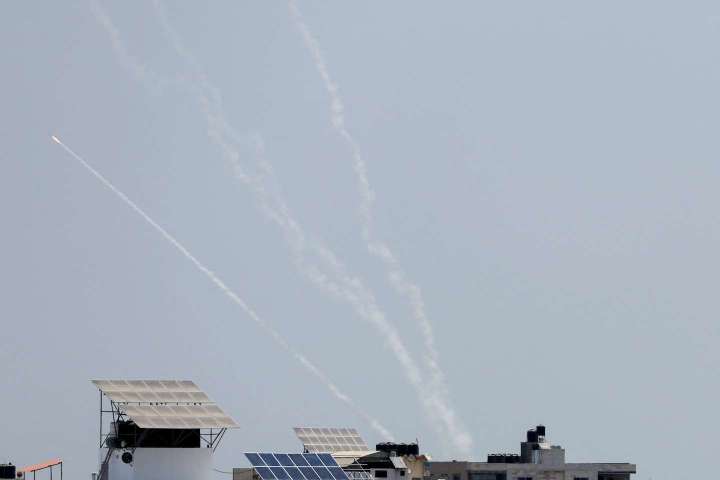 JERUSALEM — Israeli forces and militants in Gaza continued to exchange air and rocket attacks Saturday following Israeli airstrikes that have killed 13 inside the enclave since Friday, including the leader of Islamic Jihad brigade, and injured more than 114 others. There was no sign of let up in the fighting and the Israeli military said it had prepared for its operations to last at least a week.

Militants fired more than 200 rockets toward Israel in retaliation overnight, according to the Israeli military, a barrage that was ongoing Saturday afternoon.

Israel Defense Forces said its Iron Dome air-defense network had intercepted about 95 percent of the rockets. There were no reports of significant property damage. Officials said 36 of the launches had fallen short in Gaza.

The IDF continued to carry out airstrikes in Gaza, targeting what it said were rocket-manufacturing, storage and launch sites. The attacks killed one person in the Khanyunis area early Saturday, according to the Palestinian Ministry of Health, the first fatality since the initial IDF strikes killed 10, including a five-year-old girl.

Military officials said they launched a preemptive attack after detecting signs that Palestinian Islamic Jihad (PIJ) was moving equipment into place for an “imminent” attack on Israeli civilians in communities near Gaza. Tensions have been mounting between the sides since Israel arrested a PIJ leader in the West Bank on Tuesday.

“Suddenly, without warning, there was a big explosion and the window glass started to fly,” said Iman Abu Ghanima, 51, who lives in a building next to the blast site. She and her family of six, including a pregnant daughter-in-law ran from the scene and slept with relatives. It was the second time their apartment has been damaged by Israeli air strikes – their apartment was also damaged during the 2014 war, she said.

Israel also stepped up its overnight arrests of suspected PIJ operatives outside of Gaza. The IDF said forces had taken 20 men into custody after raids near Hebron, Ramallah and other West Bank locations.

There was no sign that Hamas, the rival militant group that governs Gaza, was taking part in the attacks against Israel, although the group released statements condemning Israel’s airstrikes.

Ismail Haniyeh, the Hamas political chief, said Israel bears the full responsibility for the current fighting and in a call with Egyptian mediators he demanded an immediate halt to the IDF strikes.

Hamas, which maintains its own stock of weapons and has fought multiple wars with Israel, has not always joined in PIJ’s fights. The group sat out several days of exchanges between PIJ and Israel in 2019 after Israel killed another top PIJ commander. It’s actions now could be pivotal in determining whether the current fighting escalates even further. Diplomats from the United Nations and Egypt said they are working to calm tensions before that happens. A delegation from Cairo was expected to arrive in Gaza Saturday, according to media reports.

“The most important thing is whether Hamas is going to intervene or not,” said Yossi Kuperwasser, a former head of intelligence research for the Israeli army. “Right now, I think they are sitting on the issue. They are offering moral support to Islamic Jihad sure, but they don’t hint that they are getting involved. The situation is very fragile.”

Israeli officials hope that conditions are right for a relatively quick end to the violence. In the year since Israel and Hamas fought an 11-day war that killed more than 250 Palestinians and 13 people inside Israel, 14,000 Gazans have gotten permits to work in Israel, a source of vital cash inside in the enclave that has dried up since Israel sealed the borders amid tensions earlier this week. Rebuilding, mostly funded by outside donors, had begun to pick up pace in recent months.

On a military level, analysts say Hamas has not had time to fully replenish the supply of rockets it fired in the last war, a possible disincentive to engage in another major battle now. But opinions within the organization are known to be divided, with some officials outside of the enclave more eager for an escalation.

For civilians, the situation inside Gaza is deteriorating quickly. Officials shut down the enclaves sole power plant, which already operated at limited capacity, Saturday because of a lack of fuel to run generators. There were lines to buy groceries even as occasional IDF strikes landed elsewhere in the enclave of 2 million people. No inventory has crossed from Israel since Tuesday.

Mahmoud Jaber, 23, had been in line outside a bakery in Gaza City for half an hour and had another hour to wait until he could shop for the 13 people, including seven children, who live in his house.

“We do not know how long the war will last,” he said.

Many families said they passed a sleepless night, between the airstrikes in Gaza and the even-more frequent explosions of interceptor missiles in the surrounding skies.

“There is no safe place in Gaza,” said Ammar Mansour as he waited for his turn to buy bread Saturday, something he knows to do any time the fighting flares again. “There is no hope, no future. I’m 21 years old and I have experienced four wars.”

Some were grieving those killed, including the family of Alaa Qaddoum, the five-year-old killed by shrapnel or debris on Mansoura Street.

“What was she guilty of, this little girl,” her grandfather Riyad Qaddoum said in a tearful video posted on YouTube. “She was getting ready to start kindergarten … What was her guilt?”