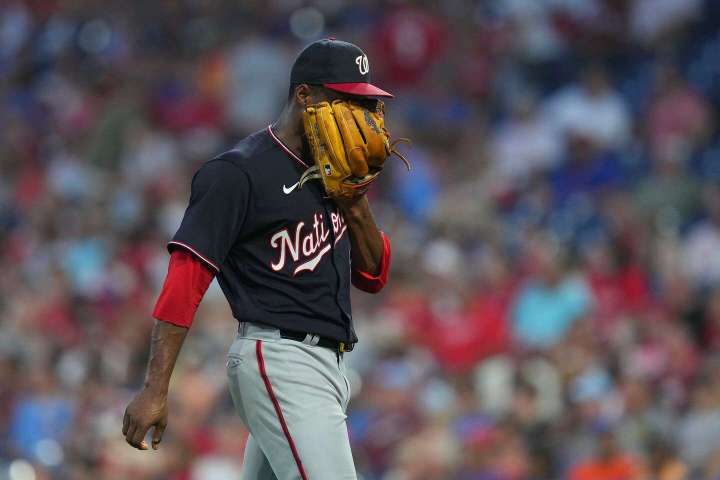 PHILADELPHIA — There is time and reason to break down Josiah Gray and how he fits into the Washington Nationals’ future. The end of his delivery can lead to too many arm-side misses with his fastball. He has not fooled enough batters this season, leading to a chase percentage that ranked in the 37th percentile among all pitchers before he faced the Philadelphia Phillies on Tuesday.

He is 24 years old and has a lot of growing to do.

But in a 7-2 loss to the Phillies, what plagued Gray was clear. His fastball command was such that he kept leaving the pitch in the middle of the strike zone. Rhys Hoskins crushed a sitting-duck fastball for a homer in the first. Nick Castellanos did the same, reaching farther up the seats in left to drive in himself and J.T. Realmuto. Realmuto was on third because Victor Robles misplayed a sinking liner right at him and let it roll to the wall in center. And a batter after Castellanos, as Gray’s pitch count began to spike, he hung a curve to Darick Hall that landed in the right field stands.

As Hall rounded the bases, Gray juggled a rosin bag on the mound. When pitching coach Jim Hickey came out for a chat, the righty had trouble staying still, bouncing his knees a bit while talking into his glove. Then in the third, on the ninth pitch of a matchup with Realmuto, Gray threw a middle-middle fastball, and the catcher skied it for a two-run shot.

“I left the balls too much [in the] middle,” said Gray, who lasted only four innings plus two batters. “Tried to get in there on Hoskins, Castellanos and Realmuto. Just left it middle, and they did what they are supposed to do. … Nothing really went well tonight.”

Gray throws his fastball more than 40 percent of the time. He has mid-90s velocity, not the kind that blows hitters away. The pitch has below-average spin rate, meaning he needs even sharper command to avoid hard contact. This season, though, he has yielded more barrels — battled balls with an exit velocity 98 mph or higher — than most pitchers. While he flashes the potential to be a rotation staple, these are the growing pains.

And when Gray was hooked in the fifth, after he issued back-to-back walks to start the inning, Phillies righty Kyle Gibson had yet to allow a base runner. Their lines were quite the contrast. Gray yielded six runs and five hits and walked three while recording 12 outs. Gibson retired 18 straight batters before he spoiled his perfect game bid by plunking Robles in the seventh, then Luis García dashed the no-hitter with a single to left.

The Nationals (36-72) have still not been no-hit since they moved to D.C. in 2005. Gibson settled for holding them to a run on two hits in eight innings. Gray, meanwhile, has allowed at least four runs in four of his six starts since July 1.

“The last four outings, his pitch count has been up,” Manager Dave Martinez said of appearances that lasted five innings, five innings, five innings and four Friday. “We have to get him to understand that early contact is good. Getting outs in three pitches or less, finishing hitters when he gets to two strikes, he has to really focus on that third pitch. … Once again, a lot of arm-side misses with two strikes, and we have to get him to get the ball in the zone for a good pitch.”

How many homers has Kyle Schwarber hit against the Nationals this season? Seven after blasting one to center off reliever Victor Arano in the eighth. That ties him for the most against his former club, though he has played in just 10 games against Washington compared with Austin Riley’s 13.

How did C.J. Abrams and James Wood do in their debuts? Abrams, a 21-year-old shortstop, batted leadoff for the Class AAA Rochester Red Wings, going 0 for 4 with two strikeouts. Wood, a 19-year-old center fielder, hit third for the low Class A Fredericksburg Nationals, logging a homer, three singles and two strikeouts. Abrams and Wood were two of the five prospects acquired from the San Diego Padres in the deal that sent out Juan Soto and Josh Bell.

Abrams debuted for the Padres this season, filling in for the injured Fernando Tatis Jr. But like they did with Keibert Ruiz last July, the Nationals want him to pass through the minors before joining the big league club. When he does, García probably will slide from shortstop to second base. Through 139 plate appearances with San Diego, Abrams had a .232 batting average, .285 on-base percentage and .320 slugging percentage.

Who left the organization Friday? Utility man Dee Strange-Gordon, left-handed pitcher Josh Rogers, right-handed starter Sterling Sharp and right-handed reliever Dakody Clemmer. Strange-Gordon, 34, signed a minor league deal with the Nationals over the winter, made the Opening Day roster, was designated for assignment in mid-June, re-signed on a minor league deal in July and will now try to stick with another team.

Rogers, 28, swung between the Nationals’ rotation and bullpen before he injured his shoulder in early June. The club kept him in Rochester once he was reactivated, then DFA’d him to make room for new players this week. He officially elected for free agency during the second inning of Tuesday’s loss.

Sharp, 27, who once departed in the Rule 5 draft, returned once he was DFA’d by the Miami Marlins and was having an up-and-down season in the Rochester rotation. And Clemmer, 26, was picked by Washington in the most recent minor league Rule 5 draft and had a 12.74 ERA in 17 appearances for the Class AA Harrisburg Senators.