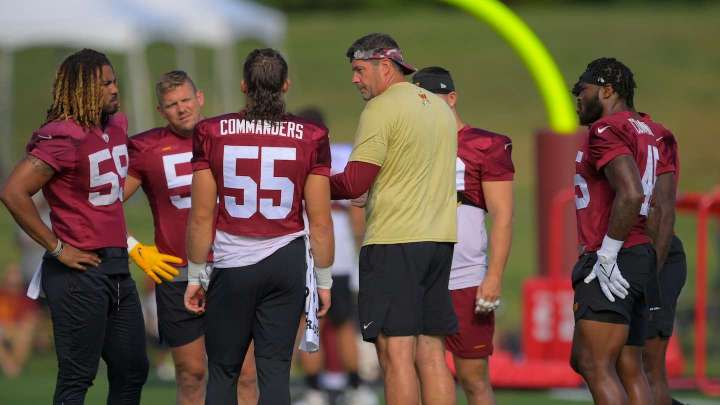 Seven months after Coach Ron Rivera suggested the Washington Commanders might pursue a veteran linebacker, the team made its first non-rookie addition of 2022 at the position, Nathan Gerry. A 2017 fifth-round pick out of Nebraska, Gerry played inside and outside linebacker for Philadelphia from 2017 to 2020 and spent most of last season on San Francisco’s practice squad.

“Well, you look at it, and you think, ‘What was our biggest need at linebacker?’ ” Rivera said Monday, explaining the signing. “We’re big and stout for the most part. We wanted a guy that could run, can cover. Nathan has a very good, an extensive background in coverage. He can run well, and he is a solid special teams guy. So he gives us some added depth.”

In camp, Gerry could compete with Khaleke Hudson to be the second outside linebacker. If Gerry makes the team, he could be a coverage version of run-stopping vet David Mayo. But whether the linebackers succeed this season probably will still depend most on the top pairing of Cole Holcomb and 2021 first-round pick Jamin Davis.

“I’m just way more comfortable with everything around me,” Davis said. “So it should be a pretty big season.”

What went wrong for Washington in 2021? Four major issues stand out.

In his first practice, Gerry flashed a bit of his coverage ability on a pass breakup. He played 46 games for Philadelphia, starting 22 times, which means he has double the starting experience of every other linebacker on the roster combined except Holcomb.

After practice, as Gerry ran off the field, a fan shouted “Cole!” — mistaking him for Holcomb — and asked for an autograph.

“Wrong White boy,” Gerry said, grinning. He turned around to reveal a lack of a mullet. “He’s got longer hair.”

“Welcome back, John,” senior offensive assistant Jim Hostler said. “Feel good to have a helmet on?”

“Yes, it does,” Bates replied.

Two wide receivers who have missed time recently — Curtis Samuel (conditioning) and Dyami Brown — appeared to be full participants. After consecutive practices for Samuel, Rivera said the team would “chill him out a little bit” in the coming days to adhere to the trainers’ plan.

The most surprising cut was Notree, whom Rivera identified in offseason workouts as one of the team’s three promising young linebackers. The team apparently soured on the undrafted rookie from Southern Illinois.

The decision to cut Kelley was also surprising. Rivera usually carries four quarterbacks in camp, and Kelley’s absence Monday forced third-string quarterback Sam Howell to step away from passing drills to help the offensive line and running back walk-through.

With so many injuries at tight end, Washington needed undrafted rookie Armani Rogers on a fair number of first-team reps Monday. Rogers, a converted quarterback out of Ohio, made the most of his opportunity by reeling in several tough snags that highlighted his 6-foot-5, 225-pound frame.

Though it seems unlikely Rogers will make a big impact this season — Thomas, Bates, Turner and Sammis Reyes are ahead of him on the depth chart — he’s showing promise as a pass-catcher. Ideally for Rogers, he could follow a similar path to Thomas, another converted quarterback.

At practice, the Commanders hosted 5-year-old Sophie Manning, who battled leukemia for two years and finished in-office chemotherapy Tuesday. The Hogfarmers Charitable Foundation — a group of season ticket holders who raise money for families affected by pediatric cancer — helped arrange for Sophie to celebrate her milestone with a trip to the team’s facility. She watched drills, and center Chase Roullier, her favorite player, signed her jersey.

We had a special guest at camp today

5-year-old Sophie is at the end of her leukemia treatment. And she’s the BIGGEST Chase Roullier fan 💛 pic.twitter.com/aUPlSuzltf