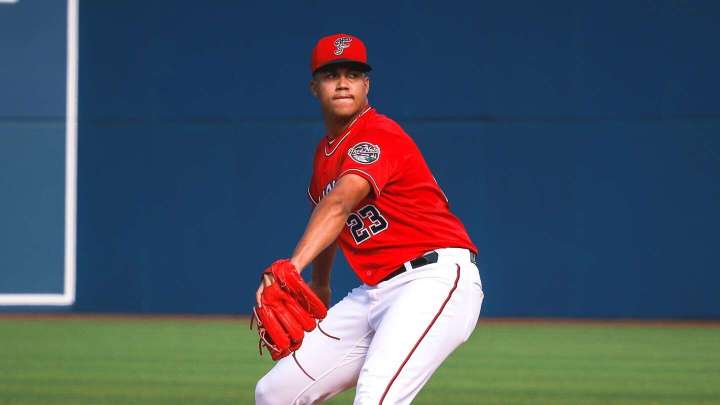 July 26 was a rainy Tuesday at Virginia Credit Union Stadium in Fredericksburg. It was so rainy that the low Class A Fredericksburg Nationals’ game against the Salem Red Sox had to be suspended in the fifth inning until the following day.

But Fredericksburg’s starting pitcher, Andry Lara, didn’t even make it that far.

Lara was pulled after four innings in another disappointing start during a rough July. Coming to the ballpark the next day, he was faced with his stat line haunting him from the right field scoreboard like a ghost: five earned runs and a home run on five hits, four walks and four strikeouts for a 5-0 deficit.

There he was, though, standing outside the clubhouse under the stadium’s bleachers that Wednesday alongside his friend, catcher and makeshift interpreter, Allan Berríos, with a wide smile on his face as he recalled his journey up to now. In less than three years, Lara went from a 17-year-old living in Coro, Venezuela, to a professional pitcher with a $1.25 million signing bonus, living and playing in a country whose language and people were foreign to him — all amid a global pandemic.

Lara knows this slump — his ERA in four July starts was 7.31 — won’t last forever. He also knows he can’t afford to stop smiling because of some bad performances.

But more than anything, he knows exactly what his manager and pitching coach in Fredericksburg know — that this 6-foot-4, hard-throwing 19-year-old has the potential to be in a future rotation for the rebuilding Washington Nationals.

“He’s had great starts and he’s had some so-so starts,” Fredericksburg Manager Jake Lowery said. “But he’s a kid that, you know, the future of the Washington Nationals rides with him.”

Lara is the youngest pitcher on the Fredericksburg roster, and his first experience in the organization was meant to be in 2020. But with the minor league season canceled amid the pandemic, he spent the year making daily trips between his hotel room and the Nationals’ training facility in West Palm Beach, Fla. He was doing the only two things he could do — work out and hang out in the hotel with the other Venezuelan players.

When rookie ball returned to Florida in 2021, Lowery was the Florida Complex League Nationals’ manager.

“[Lara] was kind of like my horse — he was my ace,” Lowery said of those first games together in Florida. The teenager had everything Lowery could hope to expect from a highly talented yet inexperienced starter — a fastball in the upper 90s, a growing arsenal of pitches, energy and confidence.

While that hasn’t changed as Lowery and Lara moved from Florida to Fredericksburg together, the quality of players they’re facing has. And in this first full minor league season — he started two games for Fredericksburg in 2021 — that has meant Lara’s outings getting shorter and his walk total increasing. In 18 starts, Lara has issued 37 bases on balls, including four games of four or more.

“Still a prospect, still throwing the ball extremely hard, still very young for this league, and he’s kind of battling some stuff,” Lowery said. “… He’s still trying to find that balance of ‘I want to go deep into games’ but also ‘I want to have strikeouts.’ So it’s a good challenge for him, a good learning experience.”

There’s almost a nonchalance when coaches or teammates talk about Lara’s recent struggles. To them, it’s not supposed to be easy for a teenager to succeed at any level of baseball, and growing pains are expected.

Sometimes, those pains come in the form of taking months to develop off-speed pitches, as Lara has done with Fredericksburg pitching coach Joel Hanrahan. But confidence takes just as much time to develop, and though it’s hard to imagine the towering Lara lacking in belief, Hanrahan knows how tough it can be to get behind in the count as a youngster.

“When he has a good game, the walks are down and he’s attacking the strike zone,” Hanrahan said. “So when he throws the ball over the plate, when he’s in advantage counts where he’s getting ahead, he doesn’t hurt that much. The games that he struggles are things that it’s 2-1 counts, 3-1 counts, he gets three or four walks in there and it’s kind of put himself in the hole. So just being able to challenge the strike zone early and trust your stuff.”

“Bad starts to me are like lessons,” Lara said. “They always help me get ready for the next one, and all I get from them are lessons. I don’t feel any pressure.”

In Berríos’s mind, he shouldn’t feel any. “He already has the stuff,” said the 24-year-old, who has played at Class AA Harrisburg. “It’s just command.”

Lara has plenty of time to work on that because, by his own admission, his life hasn’t changed much since the pandemic began. Aside from one trip to Kings Dominion, which he said was “cool,” his schedule looks nearly the same as it did in Florida: wake up, go train, play or watch a game, go home, sleep.

This year he has gotten the real clubhouse experience, especially in one that Lowery said is about half-Latino. Walking down the stairs from the concourse to the clubhouse, one trades the dad rock sounds of Van Halen for the boom-boom drops of Bad Bunny and El Alfa. Lara said he tries his hardest to have the pick of the clubhouse tunes.

“I don’t listen to [American] music. I only listen to Latin stuff,” he said.

To hear Lara tell it, he has been away from Venezuela long enough that it doesn’t hurt anymore, but he’s still just a teenager who misses his homeland “like crazy.” He has been able to go back every Christmas, and Lowery knows his whole family watches every game back in Coro, even the difficult-to-access ones.

At 19, though, Lara has big dreams — he wants to make the majors by the time he’s 21, a lofty goal for even the best prospects. With the stretch he’s in right now, that might seem distant.

But Lara made the journey from Venezuela, leaving everything he knew to take a shot at his dream. If his teammates and coaches are correct, he also has the right stuff to make that dream come true, even if it means seeing a few more rough stat lines.