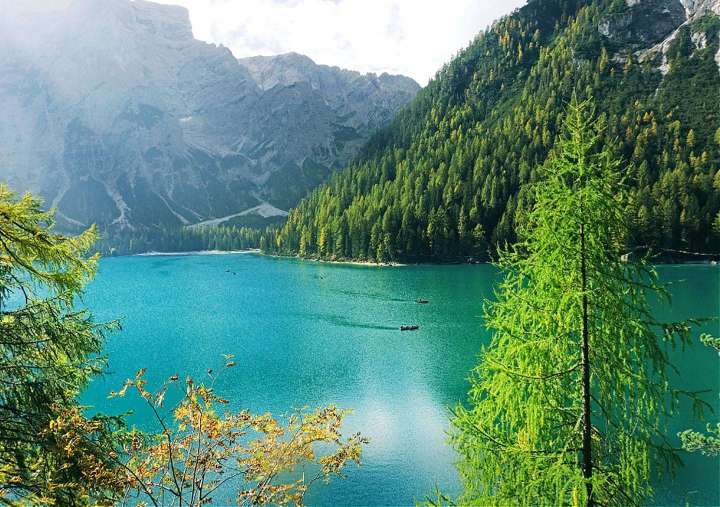 My first trip to South Tyrol, a mostly autonomous province in Northern Italy, was decades ago. I was an exchange student in Austria and my host mother, who was born in South Tyrol, invited me to join her family for a visit. During the roughly two-hour car ride from Innsbruck, Austria, my host siblings and I bantered in German as the jagged Dolomite Mountains rose up around us. Today I remember snippets from that trip: The picnic table where we drank mineral water against a backdrop of lush green hillside, the playful kitten that darted back and forth, and the heavy Austrian dialect I tried to decipher.

South Tyrol — Südtirol in German and Alto Adige in Italian — has long been a popular vacation destination for Europeans. According to the Sustainable Tourism Observatory of South Tyrol, more than 7.7 million people visited the region in 2019, the majority from Germany and Italy. Among U.S. tourists, though, it’s relatively unknown. “It’s remained a hidden gem,” said Vin Bossany, who travels there regularly with his wife, Kate. After falling in love with South Tyrol on their first visit, the Bossanys created a travel website, Throne & Vine, and now offer trip-planning services focusing on the region.

Everything you need to know about traveling to Germany

This summer, I returned to South Tyrol with my husband and our daughters, ages 11 and 13. We planned our trip to coincide with my host family’s visit there, booking rooms at a small mountain hut (the region has a variety of accommodations from spa resorts to rustic Alpine “huts,” which are mountain lodges offering warm food and a place to rest). With panoramic views, proximity to hiking trails, and hearty regional dishes, traditional Alpine huts can be ideal for travelers seeking adventure, relaxation and connection to nature.

Because there are no direct flights to South Tyrol, we decided to rent a car and drive from Innsbruck, building in a stop at a rest area along the highway. Rest stops in Italy serve the best cappuccinos, my host brother told us, because the espresso machines run continuously. While our kids wandered off to look for snacks, we stood at the coffee bar and sipped our drinks from delicate mugs balanced on saucers.

Formerly part of Austria-Hungary, South Tyrol was annexed by Italy after World War I. The region “was pretty brutally Italianized in the early 1920s,” said Diana Garvin, an assistant professor of Italian at the University of Oregon. “It was almost a proving ground for the Italian Fascist Party because they had just come to power.” But small acts of resistance helped to preserve South Tyrol’s Germanic culture. Italian authorities had a weaker presence in rural communities, where most people spoke German, said Martin Schennach, a professor of legal and Austrian history at the University of Innsbruck. There it was “quite easy to escape the eyes of Italian authorities, who can’t be everywhere, and who can’t rely on cooperation of the local population,” he said.

Today, the majority of South Tyroleans speak German, with Italian and Ladin also recognized as official languages. Unlike other parts of Italy that are popular with tourists, English isn’t spoken widely in South Tyrol. Restaurant menus, street names and trail signs are in German and Italian. (We found that Google Translate and DeepL were helpful in a pinch.) The ethnic groups tend to live in their own spheres of culture and language, Schennach told me. During our stay on the Villandro Alp, a large Alpine pasture, we communicated in German and heard mostly Austrian dialect. However, if we had ventured to Bolzano, South Tyrol’s capital and most populous city, we would have heard more Italian.

As the road narrowed and began winding upward, I gained a deeper appreciation for my host mother’s driving skills. After a mildly harrowing drive up the mountain, during which my husband navigated several razor-thin spaces between our car and oncoming traffic, we were glad to arrive at Almgasthof am Rinderplatz (Rinderplatz Hut). There, we met one of the proprietors, Maria Huber, whose family has owned and operated the Rinderplatz for many years. The hut’s five pinewood rooms are simple and unfussy, and its restaurant offers traditional South Tyrolean fare to overnight guests and visiting hikers alike. Because of a requirement from the country’s authorities, hotels in Italy ask for overnight guests’ passport information; some will inspect passports upon arrival and even hold onto them for a few hours. Rinderplatz sent an online form that we filled out in advance, so check-in was relaxed.

Once settled in, we walked a short distance to another hut, Mair in Plun, where our daughters enjoyed bouncing on the large outdoor trampoline and meeting the resident goats, rabbits, guinea pigs and cows. Then we had a small feast on the terrace: Knödel (dumplings), locally sourced cheese, meat and vegetables, and Kaiserschmarren, a sweet pancake topped with powdered sugar and served with cooked fruit. To finish the meal, the adults took shots of grappa, a type of Italian brandy that locals consider medicinal. The idea, said Garvin, is that the drink makes a hole in your stomach so you have more room for dessert. Well-nourished, we headed back down the mountain to explore our hut’s pool and hot tub. While the Bossanys had warned me to be prepared for public nudity, I was still surprised when a guest exited the sauna completely unclothed.

On the mountain, plants and animals are intertwined with everyday human experiences. After our oldest accidentally stepped on a bee, my host mother plucked a leafy weed from the ground and laid it on top of the sting. The plant — called broadleaf plantain — would ease the pain, my host mother said. We were skeptical, but within minutes, our daughter said the sting no longer hurt. At breakfast the next day, our server gestured to a glistening slab of honeycomb on a nearby table and invited us to taste it; the honey came from bees just down the road, she said. On another occasion, we stepped carefully past two sheep that had somehow exited their pen and were roaming along the main hiking trail. They peered at us with what I assumed was boredom, then continued to graze.

People say South Tyrol is close to heaven. We noticed that the increased altitude and sun made us feel tired more quickly than usual. If our kids had been older, we would have considered more strenuous hikes, such as Tre Cime di Lavaredo (Three Peaks). The full hike takes four to five hours and features an “astounding” amount of scenery, Vin told me. Instead, we opted for shorter treks. My host family had rented a cabin about 25 minutes north of our hut by foot. Finding our way there was just challenging enough to be satisfying. Along the trails, we encountered groups of hikers outfitted with gear, families with young children who stopped to splash in nearby streams, and adventurous types zooming down the mountain on electric bicycles.

While South Tyrol’s vast landscape can seem remote, we never felt alone. Walking down the mountain from my host family’s cabin on the last evening of our trip, my older daughter and I took a wrong turn. I joked that we might end up sleeping under the stars, sans camping equipment. Soon we crossed paths with a group of partying Italians and exchanged a friendly “buon giorno” (good day). Their music and laughter echoed across the meadow as we retraced our steps, the rugged Dolomites on our right and herds of cows on our left. Before the sky completely darkened, we were back in our cozy rooms, already dreaming of our next visit.

In the Netherlands, 4 contemporary art museums go beyond the Old Masters

An active adventure across the Azores’ volcanic islands