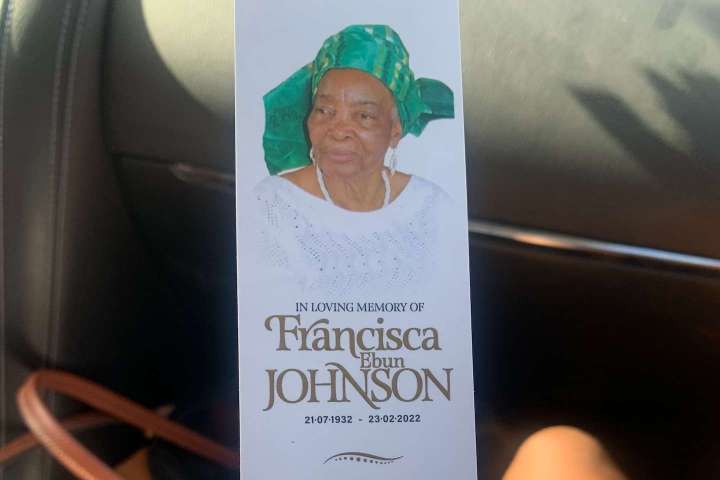 Welcome back! Thank you for all your support and feedback on my debut newsletter last week.

And … Happy Birthday to me! I turn 36 today. I’m usually the type to make a big deal about birthdays. Last year, I rang in 35 with an amazing dinner party in D.C., a girls’ trip to New Orleans and, in true Leo fashion, a photo shoot for the ’gram, just because. My usual birthday traditions include pool parties, red velvet cupcakes, caipirinhas. I also usually put out a call for Rihanna or Beyoncé GIFs on Twitter.

But for a while, I wanted 36 to come in quietly, shut the door, take off its shoes, and just please not touch or break anything in my house.

My 35th year brought much loss and death to my door. I watched as my parents struggled with aging and serious health issues. I was mourning the loss of a relationship. Post Editorial Page Editor Fred Hiatt, who hired me and helped shape my career, died in December at age 66. I got covid-19 and experienced weeks of debilitating fatigue that left me unable to do much at all.

And then in February, my grandmother, who was a survivor of Nigeria’s brutal civil war and one of the brightest lights of my life, passed away. She was just a few months shy of 90. I traveled alone to Ghana for her burial, my first time attending a funeral in my parents’ homeland.

One thing that struck me about Ghana is that death is very much a part of everyday life there. In major cities, you can find billboards and fliers announcing funerals, which are often large, weekend-long social events. When a person dies of old age, guests and family typically wear white and black to signify that they are both mourning their loss and celebrating the fact that their loved one lived a full life. Typically, the process of honoring the dead doesn’t just end with a funeral — most families hold anniversary events a year after the person has been buried.

When I returned to the United States, in comparison with our culture of grief, support appeared to be … lacking. Most people just didn’t seem to know what to say when I told them I was mourning multiple things and people at once. “Wow, that’s a lot.” “It will be okay.” “They’ll always be with you” — as though the default reaction was to express hope that I could speed through to the other side of healing.

But grief is complicated and messy, and in our power-through culture, I felt like I didn’t have social permission to admit that I was far from okay. So, it might sound strange, but on this birthday I am comforted to have stumbled upon the concept of “grief literacy” — which refers to the knowledge, skills and values that we need to compassionately understand and care for those who are going through an inescapable part of a fully lived human life. I’ve found the work of writers and researchers who are trying to change Americans’ insensitivity to the grief of others. Grief expert David Kessler has written about America’s grief illiteracy and also discusses it on his recent podcast episode, “Why Talk About Grief?”

If you are going through a time of grief, I hope some of these conversations can be a gift to you.

Above all, I’ve learned that we don’t move on from grief; we just move forward with it. Like the white and black cloth I wore for my grandmother’s funeral, I have learned to celebrate life and carry sorrow at the same time. My plan now for 36 is no longer so quiet. I’m going to celebrate life by jumping out of a plane tomorrow with a friend. Yes, I’m going skydiving for the first time I’ll tell you about it next week. Wish me luck!

Home Front: Millennials are the old kids on the digital block

Speaking of getting older: My fellow millennials, we are no longer cool. Kate Lindsay’s Atlantic essay on the “Millennial Pause” nails how we ’80s and ’90s babies, who spent our youths as masters of so much fast-changing tech, are aging out of social media. “Although Boomers fell out of the internet zeitgeist,” she writes, “they never had as far to fall as Millennials — the first cohort to watch their youth fade in real-time, with evidence of their growing irrelevance meticulously documented in memes, trends, and headlines published on the very internet they once reigned over.”

Ouch — but true. While trying to do one of the viral TikTok dance challenges — and failing to get a decent video — I realized this week that my digital skills (and knees) just ain’t what they used to be. *Insert LOLSOB emoji here*

Whatever! It’s fine. I have been enjoying 1990s and 2000s nostalgia, including remakes of popular games like Final Fantasy VII, reunion tours of groups such as the Spice Girls and Backstreet Boys, cringe-watching old episodes of “America’s Top Model” (which was hella problematic in retrospect), and soaking up documentaries about the downfall of iconic brands such as Abercrombie & Fitch and Victoria’s Secret. Cultural irrelevance comes for us all.

Fun Zone: Have a Corntastic Day!

I promise this video from the Instagram account @RecessTherapy is the most wholesome thing you’ll see all week.

What do I love so much about the wisdom of the insanely cute “Corn Kid”? He reminds us of the value of finding pleasure and joy in the simplest of things.

For the Culture: The curious case of ‘Miss Cleo’

Speaking of birthdays, I happen to share one with Youree Dell Harris, otherwise known as the popular television psychic “Miss Cleo,” who was born on Aug. 12, 1962. I remember being a kid in the 1990s and seeing her commercials for the Psychic Readers Network. With a thick Jamaican accent and colorful Afrocentric clothes, she would ask viewers to call in with their problems, so that she could read cards for them and spiritually advise them, live on air, for $4.99 a minute.

However, Harris, who died in 2016 of cancer, was no psychic; she wasn’t even from Jamaica. She was an actress and a playwright, born in Los Angeles. In 2002, the Federal Trade Commission filed complaints against two corporations for whom Miss Cleo served as the face and spokeswoman, alleging deceptive advertising and collection practices — it estimated the organizations made over $1 billion in charges from nearly 6 million viewers who called in.

I was happy to discover there is reportedly a documentary in the works about “Miss Cleo.” The director of the film, Senain Kheshgi, has said “Youree Harris may have been an accomplice or perhaps a victim in the Psychic Reader’s Network fraud but she also had talent and personality, which for women doesn’t always translate into access or wealth.” This is true for far too many Black women. I’m looking forward to learning more about Harris’s real story.

Artemis is not going skydiving with me tomorrow, to answer a question some of you have raised. Here’s how Artemis prefers to fly through the air: chasing his favorite rainbow streamer.

Ten years ago, a Swedish commercial “featured” cats supposedly skydiving (including a cat that looks a lot like Artemis). Global controversy ensued after people took the fake commercial a little too seriously.

Thanks for reading! Don’t forget my Rihanna GIFs. See you all next Friday!

Do you have questions, comments, tips, recipes, poems, praise, or critiques for me? Submit them here. I do read every submission and may include yours in a future version of the newsletter.