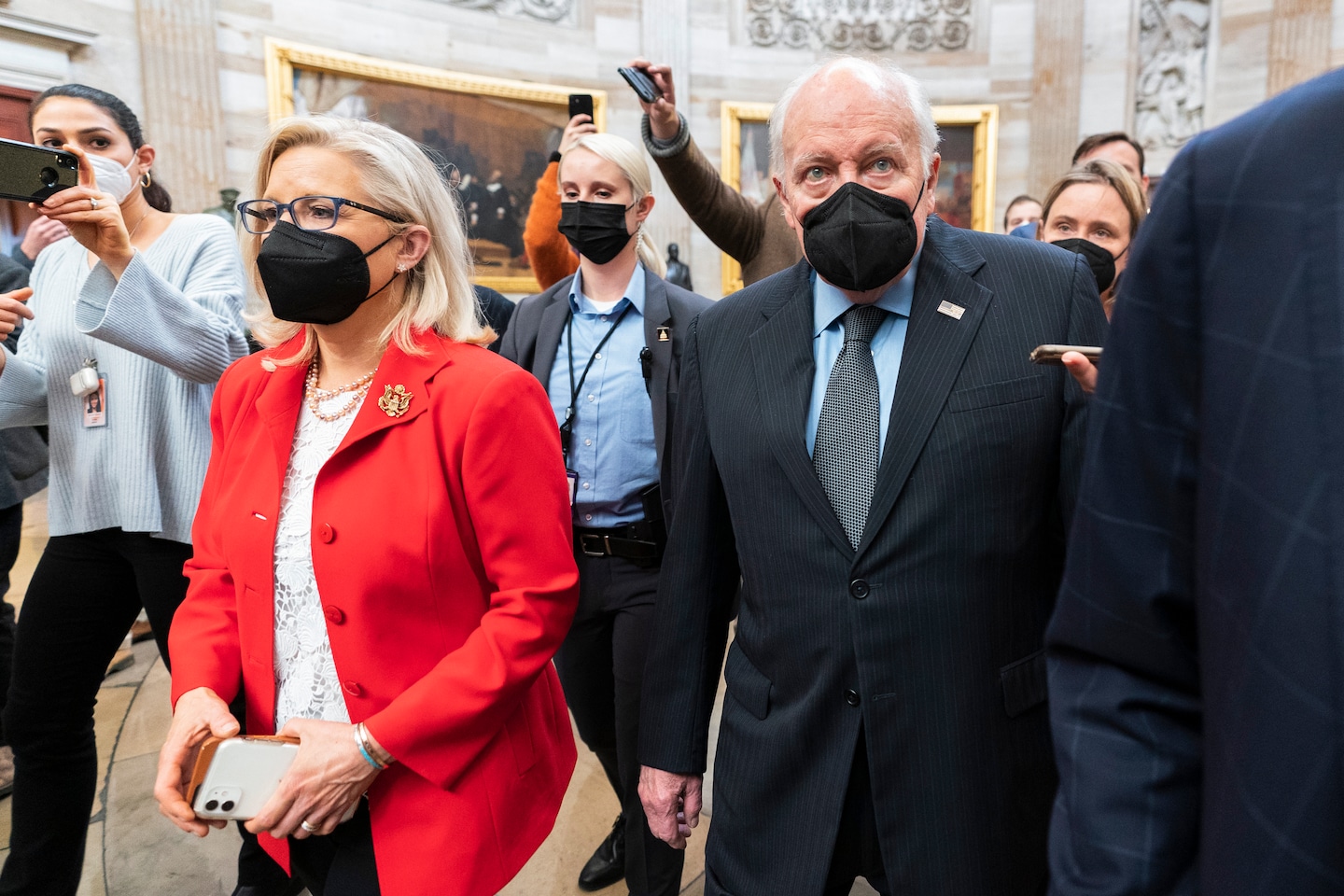 It has all the makings of a Greek tragedy.

The tragic hero, a statesman of great ability, is driven by hubris to abuse power. The forces he unleashes spread uncontrollably — and eventually destroy his own daughter. He comes to her aid, but it is too late.

Citizens, I give you the tragedy of Dick and Liz Cheney.

Closing the last hearing of the House Jan. 6 select committee, the younger Cheney, Republican of Wyoming, delivered a powerful indictment of Donald Trump’s abuse of his followers. “He is preying on their patriotism,” she said, turning “their love of country into a weapon.” A moment later, she added: “We must remember that we cannot abandon the truth and remain a free nation.”

She’s right. And Cheney deserves the lionization she is getting as she courageously fights the authoritarianism that has taken over the GOP. For this, she lost her party leadership position, and on Tuesday will likely lose her primary to a Trump acolyte.

There is a bitter irony in Cheney’s fall: She is being undone by the very politics her father championed. Weaponizing patriotism? Abandoning the truth? Vice President Dick Cheney was a pioneer.

In my new book, “The Destructionists: The Twenty-Five-Year Crack-Up of the Republican Party,” I traced the actions of GOP leaders who essentially created the Trump era by removing the guardrails of our political system. Dick Cheney was one such leader.

Liz Cheney speaks rightly of the primacy of truth to a free people. But her father abandoned the truth in the most profound way, starting a war on the basis of lies. Liz Cheney denounces the evil of preying on patriotism. But her father was a key figure in a White House that politicized the 9/11 attacks and portrayed the administration’s opponents as traitors.

There was extraordinary national unity after the 2001 terrorist attacks. But George W. Bush’s strategists argued that Republicans should “go to the country” on the issue of terrorism and “focus on war” in the elections of 2002 and 2004, making the case that Democrats endangered Americans’ security. On the campaign trail, Dick Cheney warned that if people made “the wrong choice” and voted Democratic, “then the danger is that we’ll get hit again, that we’ll be hit in a way that will be devastating.” As Bush said Democrats were “not interested in the security of the American people,” Cheney claimed electing Republicans was “vital” for “defending our homeland.”

In that same year, Republicans close to the administration ran an infamous ad implying that then-Sen. Max Cleland (D-Ga.), a triple amputee from his service in Vietnam, with images of Osama bin Laden and Saddam Hussein. Two years later, a group with ties to Bush did similarly to Democratic presidential nominee John F. Kerry, with flimsy accusations that he lied about his Vietnam service and betrayed comrades.

Cheney was also the primary force for distorting intelligence about Iraq to make the case for war. He falsely claimed in 2001 that it was “pretty well confirmed” that the 9/11 mastermind met with Iraqi intelligence. He falsely called evidence of a link between Iraq and al-Qaeda “overwhelming” and said Hussein had “long-established ties with al-Qaeda.” He falsely called Iraq “the geographic base of the terrorists who have had us under assault … on 9/11.”

Cheney said in 2002 that he was “convinced that Saddam will acquire nuclear weapons fairly soon”; U.S. intelligence said that was nearly a decade away. Eventually Cheney baldly — and falsely — said Iraq had “in fact reconstituted nuclear weapons.”

In the scandal over the White House’s outing of a CIA operative after her husband questioned the administration’s nuclear claims, Cheney’s chief of staff, Lewis “Scooter” Libby, was convicted of perjury. Former White House press secretary Scott McClellan later complained that Libby “and possibly Vice President Cheney — allowed me, even encouraged me, to repeat a lie.”

Cheney claimed that “we will, in fact, be greeted as liberators” in Iraq; intelligence had (accurately) warned that the situation could “rapidly deteriorate.” Later, Cheney wrongly claimed that Iraq had “turned a corner,” that the insurgency was “in the last throes.”

Those contagions — using disinformation and patriotism as political weapons — spread through the Republican Party and consumed it utterly with Trump’s triumph. Too late, Liz Cheney bravely stood against both, and is on the verge of political exile. Now, in the final act, Dick Cheney has returned, filming an ad for his daughter.

“In our nation’s 246-year history, there has never been an individual who is a greater threat to our republic than Donald Trump,” the elder Cheney said. “He is a coward. A real man wouldn’t lie to his supporters.”

No, he wouldn’t. All our Greek tragedy needs now is the catharsis: a glimmer of self-awareness from Dick Cheney about his role in causing this.