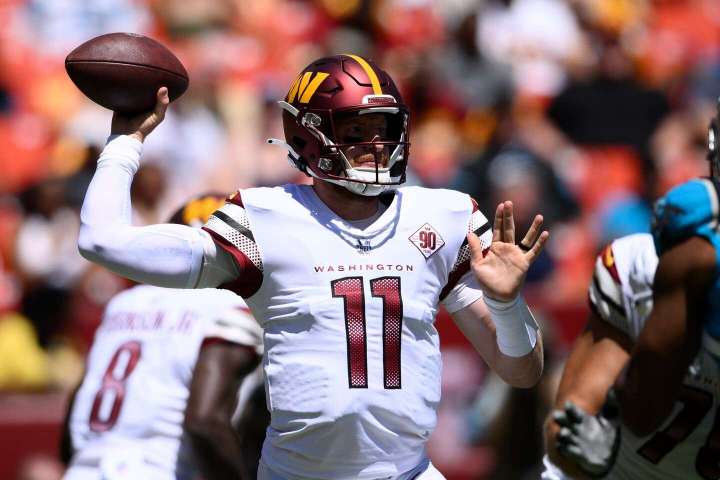 Ron Rivera got much of what he had said he wanted Saturday afternoon.

His starters, playing in their first game as Washington Commanders, stayed within the window of plays he hoped they would. They executed a lengthy scoring drive that showed the depth of their rushing corps and resilience of the offensive line.

His starting quarterback, Carson Wentz, efficiently operated the offense, and the rookie, Sam Howell, put on a show for a late rally.

Flawless, it wasn’t. Not by any stretch. But the Commanders’ preseason-opening 23-21 loss to the Carolina Panthers at FedEx Field, which came down to a field goal in the final seconds, offered the clearest gauge yet of just how close they are to a playoff run and improving upon their 7-10 record last season.

The loss also provided a close-up look at many players vying for roster spots and gave others a platform to shine.

Though many fans came to see Wentz, it was Howell, the third-string rookie quarterback, who won over the crowd as he rallied the Commanders with two touchdowns in the game’s final nine minutes. He single-handedly reinvigorated a sparse crowd and helped lesser-known players leave their marks, too — including wide receiver/returner Alex Erickson, who led the Commanders with 54 receiving yards and scored the go-ahead two-point conversion.

The defense that has won the majority of battles against Washington’s offense in training camp came out flat, allowing the Panthers’ offense to convert more than 61 percent of its third downs.

For Ron Rivera, ‘the judgment starts with winning or losing.’ That’s progress.

“You got an opportunity on second and long when you’re on defense, you’ve got to keep it second and long,” Rivera said. “There are too many third and mediums to short. That was the crux of what [defensive coordinator] Jack [Del Rio] and I talked about, and we talked about it during the game.”

The Commanders’ offense started with a three and out and then a fumble, courtesy of running back Antonio Gibson, who struggled with ball security in 2021.

“Very frustrating. Can’t have it,” Gibson said. “It’s a big-time, big-game league, and you can’t have that happen. I can’t do nothing about it but move on to the next play, correct what I need to correct and keep moving.”

The energy picked up as the game went on. Wentz completed 10 of 13 pass attempts for 74 yards in his 21 offensive plays. He didn’t throw an interception or a touchdown pass, and for the most part he cleanly ran the offense.

The team’s first series ended when tight end Armani Rogers dropped a deep pass along the right sideline. The pass was on target, but Rogers, in tight coverage, bobbled the ball as he spun around and lost control.

When the offense came back out for its second series, Wentz completed passes of two, four and six yards to Rogers to get a first down, but the drive ended on Gibson’s fumble.

The Panthers scored on their subsequent drive to take a 10-0 lead — kicker Zane Gonzalez nailed a 41-yard field goal to end Carolina’s opening series — when Rashard Higgins waltzed into the end zone on an eight-yard reception.

But the Commanders bounced back in a way Rivera had hoped, methodically marching down the field on 14 plays for their first touchdown. Gibson was benched for the series following his turnover, and rookie running back Brian Robinson Jr. took over.

Robinson finished with 26 rushing yards on six carries for an average of 4.3 yards. He said he wasn’t satisfied with his performance yet came away feeling more comfortable with his role and his place in the pro game.

“I just felt like, I’m here now, you know what I’m saying?” Robinson said. “I’m here to stay, too. It was just a feeling, like, I got a chance to show people who I am, and there’s a lot more to come.”

To begin the 82-yard drive, which started in the first quarter and carried over into the second, the Commanders received contributions from multiple playmakers. Wentz connected with Terry McLaurin along the right sideline for a 16-yard gain. Robinson ran for 11 yards two plays later, and then, on third and four, Wentz connected with veteran back J.D. McKissic for a 15-yard catch-and-run to put the Commanders on the Panthers’ 9-yard line. Three plays later, Robinson scored from the 1. Wentz and the Commanders were 3 for 3 on third downs in that drive.

“I thought that third drive was good for us to kind of get out there, to stay on the field, convert some third downs and finish in the end zone like that,” Wentz said. “So as far as that went, I thought that was okay. Obviously, a loss is never fun, but I thought there was a lot we could learn from on both sides of the ball that were good for us.”

Rivera promised that all three quarterbacks would play, and Taylor Heinicke took over at the start of the third series, with roughly nine minutes remaining in the second quarter. But he struggled with accuracy and rhythm with his receivers and finished 4 of 9 for 21 yards with an interception for a 12.0 passer rating.

Just as the crowd seemed to quiet, Howell entered the game with about nine minutes left in the third quarter. The rookie, a fifth-round selection out of North Carolina who was once projected by some analysts to be a first-round pick, put on a show.

He completed his first pass. His longest completion went for 40 yards. His best series started with a little more than 11 minutes remaining. He connected with rookie wide receiver Kyric McGowan for a 27-yard catch, then found Marken Michel for 17 yards and finished the drive by scrambling up the middle for a 17-yard touchdown. Howell finished 9 of 16 for 143 yards and added two rushing touchdowns.

“I just kind of saw the hole and just tried to tuck it and run it and make the play,” Howell said. “I kind of ran the ball a lot in college, so it’s something I’m used to. … A lot of people didn’t know I had that in me, so I definitely got a lot of comments on the sideline.”

The Commanders’ new fight song, an alteration of the team’s previous one, blared from the loudspeakers after his first score.

By his second, fans were on their feet.

But by the end, a 45-yard Panthers field goal sailed through the uprights to give Carolina the victory.