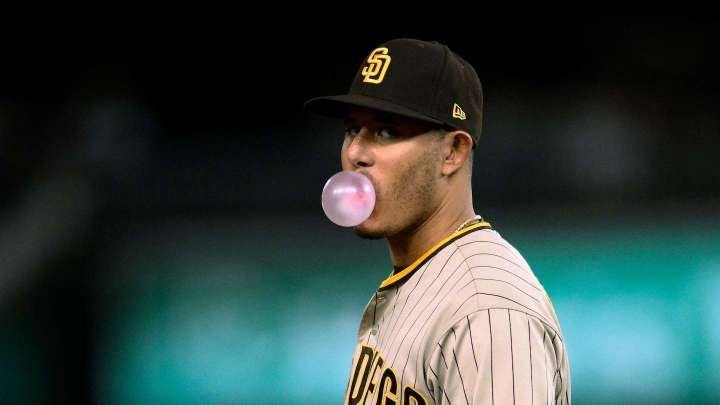 The San Diego Padres hoped they were on the cusp of emerging as a blissful offensive juggernaut when news of Fernando Tatis Jr.’s season-ending suspension relegated them to fighting for their lives again. Perhaps they always had been, really, because even their trade deadline acquisition of Juan Soto and Josh Bell hadn’t guaranteed them anything.

By Saturday morning, San Diego was clinging to the third and final National League wild-card spot and further back from the NL West-leading Los Angeles Dodgers than any other second-place team in baseball — fending off the struggling Milwaukee Brewers without the young superstar they thought they would be adding for the stretch run, not at all guaranteed an October berth. Such is the fragile state of the baseball playoff picture on this mid-August weekend, as blurry at the top in some cases as at the bottom, still capable of being changed entirely with a few strokes.

That picture is bigger than ever before: MLB will use a new, larger playoff format this year in which the two division winners with the best record in each league will receive a bye, leaving the other division winner to play one of three wild-card teams in a best-of-three series to advance. Instead of five teams qualifying in the playoffs for each league, this year will include six.

And as of mid-August, there are few sure things.

The Dodgers are, as has become their annual tradition, the closest thing to a playoff lock as there is. They are 45 games over .500. They have outscored opponents by nearly 250 runs. Their lineup is loaded. Their rotation has weathered major injuries to remain surprisingly steady. They own the biggest division lead in baseball — 16 games up on the Padres. The second-biggest lead in baseball belongs to another October regular, the American League-leading Houston Astros, whose stingy right-hander Lance McCullers Jr. was scheduled to make his first start of the season Saturday. Astros starters already owned the lowest ERA in the AL without him.

The ‘Field of Dreams’ game was a hit last season. Can MLB keep it going?

The best record in the AL once belonged to the New York Yankees, who at times this season looked likely to unseat the Dodgers as the sport’s juggernaut but have since slid back into something resembling mortality. They are 29 games over .500 but 7-14 in the second half, thanks in part to a sudden onslaught of injuries that has led to the kind of slide that can snowball quickly under the searing New York spotlight. But they also are riding one of the greatest individual seasons in recent baseball history as Aaron Judge chases down Roger Maris’s regular season home run record* (*non-steroid era) with 46 home runs through 113 team games — on pace for 66.

The Yankees are 10 games up on the Toronto Blue Jays in the AL East, a solid if not insurmountable difference in a division that has three other teams within two games of each other and wild-card positions. The Jays have yet to find the kind of magic their talented young roster seemed likely to stir.

The Tampa Bay Rays, thus far less of a factor than normal in this division, are likely to get young star Wander Franco and a peck of other injured contributors back in the coming weeks. The Rays currently trail the unlikeliest member of the playoff picture, the Baltimore Orioles, by half a game for the final AL wild-card spot. Despite trading away stalwart Trey Mancini and closer Jorge Lopez, upstart Baltimore is a part of the AL playoff picture.

From July: The Orioles, with moxie and magic, are in an unfamiliar spot: On the rise

The Orioles will play the next month and a half with no pressure, having entered this season with expectations of mediocrity before handling their trade deadline without much urgency. They will try to hold off the far more beleaguered Blue Jays, who entered this season with World Series dreams, fired their manager this summer and made practical but not transformative moves at the deadline in the hopes of salvaging their season.

All of them will be elbowing for position with the Seattle Mariners, a team that rattled off 14 straight wins to pull itself back into contention, then pounced on the best available starting pitcher at the deadline in Luis Castillo. The Mariners have not made the playoffs since 2001, the longest active drought in the four major men’s North American pro sports. At times over the past two years, they have looked like a team capable of staging the kind of storybook October run they’ve been waiting for. It has yet to materialize.

The most formidable wild-card team in either league may be whichever team does not win the NL East — as currently positioned, those playoff-tested Atlanta Braves. After a brief second-half wobble, the New York Mets look as steady as ever, untethered by demons of disappointment past and unintimidated by Atlanta. But Atlanta has proved its ability to coalesce at the exact right moment, so with a six-game lead, the Mets are not necessarily out of reach just yet.

In both leagues, the most chaos may end up emerging in the Centrals, the weakest divisions in the sport that are nevertheless decidedly up for grabs. The St. Louis Cardinals added steadying presences to their rotation and are just 1½ games ahead of the Milwaukee Brewers in the NL Central. The Brewers, after making the eyebrow-raising trade of Josh Hader, have struggled and spiraled somewhat since the deadline. But their formidable rotation always seems capable of holding them together enough to stay competitive late.

And in the AL Central, the Chicago White Sox are in the midst of a disappointing season, but they will try to beat out the Minnesota Twins and young Cleveland Guardians for the top spot. It is possible, because of the relative power of the Mariners and AL East, that only one team in the Central will qualify for the postseason. The race to win that division, then, may prove one of the most exciting down the stretch, even if it’s not talked about as much.

Any act of baseball nature, like the Tatis suspension or a major injury, seems capable of recasting most of the picture entirely, so much remains uncertain. And as the annually dominant Dodgers can explain, even the sure things in September are no sure thing in October.